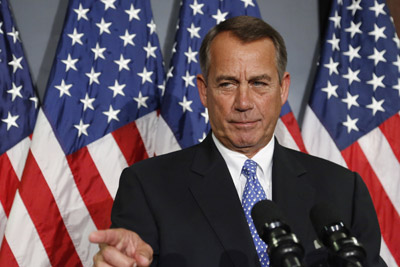 House Speaker John Boehner, R-Ohio, gestures during a news conference in late October on Capitol Hill in Washington. Boehner said Nov. 13 that he would not go to conference with the Senate to discuss getting the House to accept a comprehensive immigration reform bill the Senate approved in June but he has indicated the House could take up its own version of a reform bill. (CNS photo/Jonathan Ernst, Reuters)

WASHINGTON (CNS) — Depending on how one interprets House Speaker John Boehner’s recent comments on the prospects for immigration reform legislation to be passed in the House, it might be out of the question, or the measure might just take a different form than the bill already passed by the Senate.

Boehner said Nov. 13 that he would not go to conference with the Senate to discuss how to get the House to accept the comprehensive reform bill senators approved in June.

But at a news conference the next day, Thomas J. Donohue, president and CEO of the U.S. Chamber of Commerce, and other business, faith and law enforcement leaders insisted that all hope is not lost.

Instead, Donohue argued, Boehner was careful to also say that “it’s time to get immigration reform done,” just, apparently, not with the Senate bill. Boehner has long said he would not bring the Senate bill to the floor of the House unless he had support from a majority of the Republican caucus.

Donohue said the House can instead move to the floor five separate bills that deal with aspects of immigration reform, which have already moved through relevant committees. Together the five bills “cover the waterfront” of the key pieces of comprehensive immigration reform, he said.

The Senate bill, which passed in a 68-32 vote, includes: billions of dollars of new spending on border security and addresses a wide range of problems in the current systems, including: family immigration; various types of worker visas; and legal status for people who were brought to the U.S. as children. It includes a 13-year path to citizenship for many of the estimated 11 million immigrants who lack permission to be in the country. They would be required to speak English, pay fines and any taxes owed and meet other benchmarks. 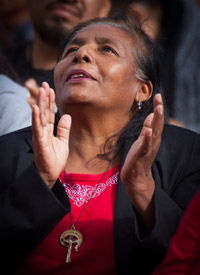 Additional legislation might be required to make sure the piecemeal approach addresses all the elements included in the Senate’s comprehensive bill, but Donohue said “we’re going to find a way to produce a stew that gets the great majority of what we — the American people — want.”

He said that unlike senators, who are elected on a statewide basis, some House members have a tough sell to persuade the people of their congressional districts that supporting immigration reform is a wise move.

“We’ve got to give them a little breathing room,” Donohue said.

“All of us in the country stand at a critical moment in history,” Bishop Wester said. The nation’s leaders must decide if the country moves forward with immigration reform or continues to allow an immoral situation to prevail.

“Immigration reform is about human beings, and it’s about their basic rights: life and dignity,” he said. “Our country values these human rights enshrined in our Constitution, and it’s really unacceptable that we make an exception when it comes to immigrants. Families are being separated through deportations, migrant workers are exploited and victimized by unscrupulous employers, and human beings are dying in our desert. This suffering must end. It is always time to do the right thing.”

Bishop Wester recalled Pope Francis’ pastoral visit to the Italian island of Lampedusa, where boatloads of immigrants pass in their voyage from North Africa to Europe. On that trip this summer, the pope decried the throwaway culture that devalues human beings.

That culture exists in the United States as well, he said. “We can no longer let partisan politics keep us from doing our duty to our fellow human beings.”

The White House described the private meeting as a chance to discuss the shared commitment of the administration and the faith groups to persist in their efforts.

Meanwhile, on the National Mall participants in a “Fast for Freedom” continued their hunger strike to try to draw attention to the immigration reform battle. Bishop Wester was among political and religious leaders who stopped by the site to encourage participants and to pray with them. 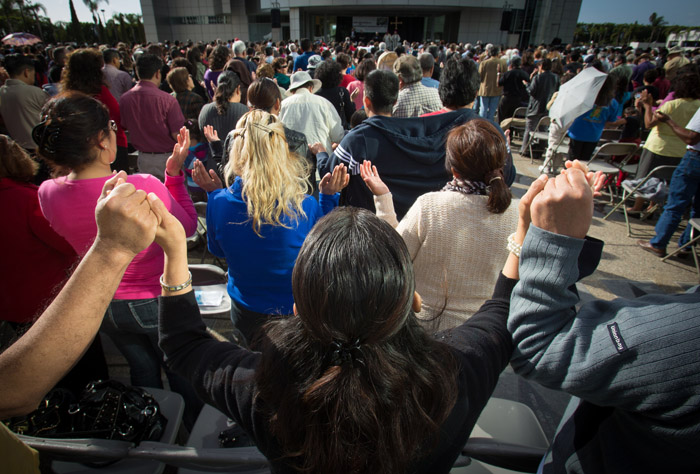