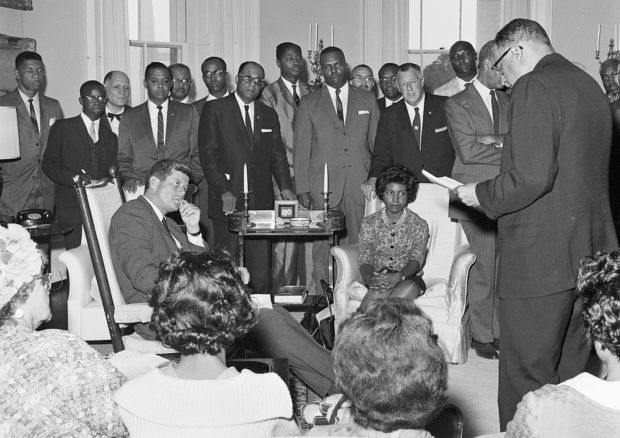 U.S. President John F. Kennedy meets with representatives from the National Association for the Advancement of Colored People in 1961 in the Oval Office of the White House in Washington. (CNS photo/courtesy John F. Kennedy Presidential Library and Museum)

The public image was vibrant: with first lady Jacqueline Kennedy’s redecoration of the somewhat tattered White House and her posing for magazine covers in striking Oleg Cassini designs; the couple’s two endearing children, Caroline and John-John, and their pet pony, Macaroni — a gift from Vice President Lyndon B. Johnson.

The context for the idyllic scene contrasted vividly as the Cold War festered globally and social upheaval fractured the homefront.

As Kennedy, then 46, arrived in Texas in November 1963, the visit came against a backdrop of the Cold War, the space race and the nation’s volatile civil rights scene.

In Kennedy, the nation’s 35th president and first Catholic to hold the position, the populace got a war hero, a Pulitzer Prize-winning author and visionary.

During his election campaign against Richard M. Nixon, Kennedy had to dispel the notion that his religious beliefs would translate to a U.S. ruled by the Vatican.

Kennedy had commanded a Navy torpedo boat and earned a Purple Heart, yet the presidency brought management frustrations, according to Jeffrey Engel, director of Southern Methodist University’s Center for Presidential History.

Engel told The Texas Catholic, newspaper of the Dallas Diocese, that Kennedy earned a reputation for inspired crisis management at a time when humanity grappled with unprecedented fears.

“People always had a fear that God could end the world, but the notion that the world could end tomorrow because of human action really only arose in the 1950s,” Engel said. “Kennedy was first and foremost a Cold War president. He thought that (President Dwight) Eisenhower had run out of energy. The thing to remember about the Kennedy administration, like all presidential administrations, is that an administration is, by and large, a rejection of what came before.” 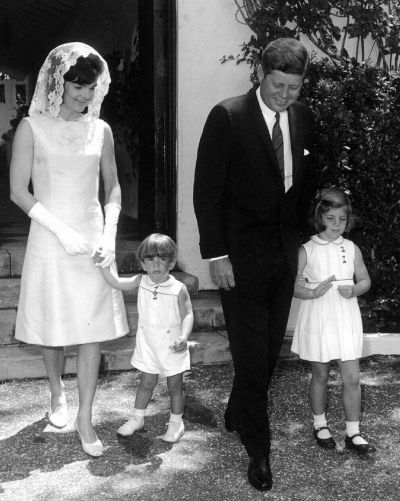 U.S. President John F. Kennedy, his wife, Jacqueline, and their children, Caroline and John Jr., are seen on Easter Sunday in 1963. (CNS photo/Reuters)

“The Peace Corps really does represent what Kennedy stood for — to send American energy around the world,” Engel said of the development organization founded under Kennedy to send U.S. volunteers to build friendship and share skills with the people of other nations. “But my read of Kennedy was that he was interested in foreign affairs and did domestic policy because he had to.”

Others characterized the Kennedy administration in terms of personality.

In a September article in The Atlantic, Editor-in-Chief James Bennet, quoted the magazine’s February 1964 edition, in which historian Samuel Eliot Morison extolled Kennedy’s courage, comparing the significance of his decision-making to Lincoln’s.

The political power struggle known as the Cold War that also defined the Kennedy presidency lasted for decades and shaped international affairs on many fronts.

The disastrous U.S. attempt to overthrow Cuban leader Fidel Castro in the Bay of Pigs invasion heightened international tensions. Soon after, the Soviet buildup of missiles in Cuba, a scant 90 miles off the coast of Florida, brought the United States and the Soviet Union to the brink of nuclear war in October 1962.

For 13 days, the world watched and waited as the U.S.-Soviet standoff continued. Finally, Kennedy and Soviet leader Nikita Kruschev came to an agreement: The U.S. would not invade Cuba if Khrushchev removed the missiles from Cuba. On Oct. 28, 1962, Khrushchev announced he had agreed to remove the missiles.

A race to succeed in space exploration added to competitive zeal between the U.S. and the Soviets.

Kennedy also made strides for civil rights during a struggle that dramatically revealed the country’s divisions.

In a televised speech in June 1963, during the height of civil rights protests, Kennedy told the nation that racial discrimination was intolerable.

“If an American, because his skin is dark, cannot eat lunch in a restaurant open to the public, if he cannot send his children to the best public school available, if he cannot vote for the public officials who represent him, if, in short, he cannot enjoy the full and free life which all of us want, then who among us would be content to have the color of his skin changed and stand in his place? Who among us would then be content with the counsels of patience and delay?”

“His death was the beginning of the end of innocence for the post-World War II generation,” he said. “For the first time, Americans realized that they weren’t going to be able to do, collectively, everything they wanted to do in the world.”

Harasta is on the staff of The Texas Catholic, newspaper of the Dallas Diocese.

NEXT: Call to ‘ask not …’ still resonates in commitment to public service