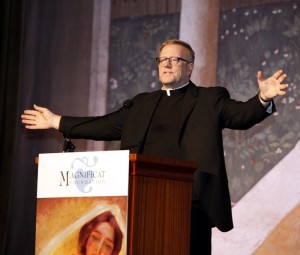 It’s the latest goal for the priest who more than a dozen years ago was asked to jump-start an evangelical endeavor to “invade that space” where the church’s message was not often heard.

“If you want to reach people who are under 40, you have to use media. Things like YouTube had just come into being and we jumped into that with two feet,” said Father Barron. “If you want to find the unchurched Catholics and the secularists, you aren’t going to find them by staying in church and inviting them to programs. You have to use this new means. We have to invade that space.”

The author of 10 books and a weekly radio commentator, Father Barron brings to YouTube and the web a Catholic perspective on mainstream cultural events, from blockbuster movies like “World War Z” to same-sex marriage. He has posted more than 180 videos online and his viewers have topped a million.

Father Barron in 2000 founded the nonprofit Word on Fire that supports his efforts to draw people to the Catholic faith through new media. According to tax records, the nonprofit in 2011 had nearly $5 million in revenue generated by his diverse teaching tools, funds that go to support the mission of Word on Fire.

“What I like about the new media is it gives you a chance to get way outside the walls of the church,” said the priest, who is currently is rector of Mundelein Seminary in the Chicago Archdiocese.

Father Barron, 53, said he works to spread the faith in a nonthreatening way because anything else and people ignore the message. He has a “no finger-waving” rule and instead aims to speak to “deep religious truths.”

His goal is to reach people who no longer sit in the pews and people he calls “secularists,” people with a viewpoint that “stifles the human spirit,” he said during a recent visit to the Atlanta Archdiocese.

It is an outlook that says the sciences “alone tell us all we need to know,” and which can shut down “the aspiration of the spirit toward the transcendent,” he said.

He likes Pope Francis’ image of the church as a “field hospital,” treating people’s wounds first. It is always best to lead with the “merciful face” of the Lord, he said.

Ordained in 1986, Father Barron took on the evangelization mission in new media when Chicago Cardinal Francis E. George charged him with the task. He was already an author and sought-after speaker, so he said the cardinal told him, “You are evangelizing wherever you go, so let’s kick it into a new gear.”

He’s inspired by Blessed John Paul II, who in 1983 called for a new evangelization that requires “new ardor, new methods and new expressions,” the priest said, to engage Catholics in renewing their faith and to reignite the Catholic faith where it has waned.

With podcasts, apps, websites, 28,000 likes on Facebook and some 37,000 Twitter followers, Father Barron reaches out and relies on social media tools to tell the story of faith.

“Catholicism” was a 10-part documentary series shown nationwide on PBS. His new focus is on “Pivotal Players,” a project highlighting influential men who have shaped the church and civilization — . ranging from “the martyr, St. Irenaeus,” and “the reformer, St. Francis of Assisi” to “the evangelist, G.K. Chesterton.” It’s still in the formative stage and he needs to raise money for it — an estimated $4 million.

“What is needed today, above all, would not be new buildings, as important as they are always are; it’s not infrastructure, as important as that will always be. What is needed now is this outreach through the media,” he said. “We have to be proactive; we have to get people. We cannot trust they will come to our institutions. We have to reach them, and what we use is the new media.”