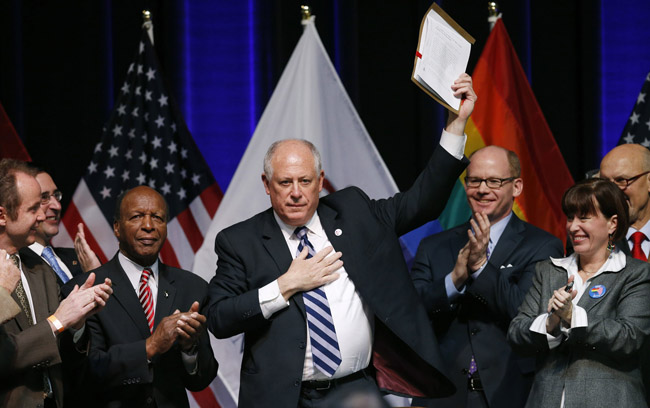 Illinois Gov. Pat Quinn holds up a copy of the Religious Freedom and Marriage Fairness Act after signing it into law at a ceremony in Chicago Nov. 20. Illinois is the 16th state to legalize same-sex marriage. (CNS photo/Jim Young, Reuters)

WASHINGTON (CNS) — Archbishop Salvatore J. Cordileone of San Francisco said the action by the Illinois Legislature and Gov. Pat Quinn to legalize same-sex marriage “does not alter the natural reality that marriage is and can only be the union of one man and one woman.”

Speaking as chairman of the U.S. bishops’ Subcommittee for the Promotion and Defense of Marriage, the archbishop also said in a statement distributed by the bishops’ media office that some legislators took steps to “manipulate” the words of Pope Francis to gain support for the measure.

“Marriage redefinition is a serious injustice,” Archbishop Cordileone said. “The law exists to safeguard the common good and protect authentic rights, especially the right of children to have a married mother and father.”

The law takes effect June 1. Same-sex marriage now is legal in 16 states and the District of Columbia.

The statement quoted Pope Francis’ first papal encyclical, “Lumen Fidei” (“The Light of Faith”), in which the pope said that family life is best supported by the “the stable union of man and woman in marriage.”

It also quoted the pope when he was archbishop of Buenos Aires, Argentina. During a campaign in his home country to redefine marriage, he said the survival of the identity of the family as father, mother and children was in “jeopardy.”

Archbishop Cordileone also credited those who opposed the Illinois measure.

“The courageous efforts of those, including leaders and legislators who have helped defend marriage in Illinois is to be commended,” Archbishop Cordileone said. “The defense of truth and goodness is never in vain.”

In the statement, the archbishop was critical of legislators for bringing the pope into the legislative debate.

“It is therefore disgraceful that some legislators would manipulate the words of Pope Francis to suggest that he would support marriage redefinition,” Archbishop Cordileone said.

The Chicago Tribune reported that at least two Catholic legislators cited Pope Francis’ in announcing their support for the same-sex marriage bill. House Speaker Michael Madigan and Rep. Linda Chapa LaVia both were quoted as saying they were influenced by the pope’s comments aboard the papal plan from Rio de Janeiro to Rome after the World Youth Day celebration in which he said he was unable to judge the lives of gay people if they are seeking God.

At a prayer service Nov. 20 in Springfield, Ill., Bishop Thomas J. Paprocki offered “prayers of supplication and exorcism in reparation for the sin of same-sex marriage.”

The prayer service occurred the same day that Quinn, a Catholic, signed the Illinois legislation into law.

Bishop Paprocki told the 500 people in attendance at the Cathedral of the Immaculate Conception that the prayers being offered were done in “great reluctance” after a controversy arose about the service also serving as an exorcism.

He said in his homily that he felt called by God to lead the service and that prayers were being offered as an act of mercy.

He explained that under church teaching, same-sex marriage is a sin.

“It is not hateful to say that an immoral action is sinful. On the contrary, the most compassionate thing we can do is help people to turn away from sin. To ignore another person’s wrongful actions is a sign of apathy or indifference, while fraternal correction is motivated by love for that person’s well-being, as can be seen by the fact that our Lord Jesus himself urged such correction,” he said.

“Mercy does not mean approving of something that is sinful, but does absolve the wrongdoer after a change of heart takes place in the sinner through the gift of God’s grace,” he said. “It is not the church that must change to conform its teachings to the views of the world, but it is each individual who is called to be configured to Christ.”

Acknowledging negative comments and misperceptions about the service for its inclusion of exorcism, Bishop Paprocki said his intention was to repudiate the devil.

“The fact is that a ‘minor exorcism’ takes place in every baptism and confirmation ceremony when we renounce Satan and all his works and empty promises. This prayer service will be along those lines,” he said.

“I’m not saying that anyone involved in the redefinition of marriage is possessed by the devil, which, if that were the case, would require the remedy of a ‘major exorcism,’ but all of us are certainly subject to the devil’s evil influences and in need of protection and deliverance from evil,” the bishop said.

Explaining that the prayer service and his homily were “not meant to demonize anyone,” Bishop Paprocki said they were “intended to call attention to the diabolical influences of the devil that have penetrated our culture, both in the state and in the church.”

He said all people are called to “reflect more deeply on the truth of marriage” as being one that leads to new life through the creation of children as opposed to simply supporting a “romantic relationship designed for individual, not even mutual, fulfillment.”

“Same-sex marriage is contrary to the plan of God, as described in the Bible,” Bishop Paprocki said.