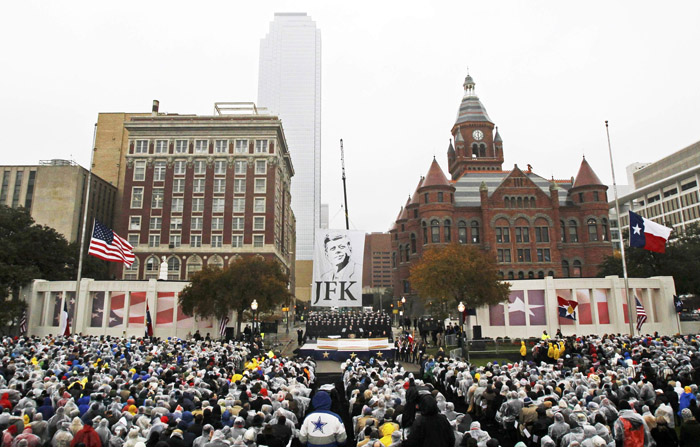 DALLAS (CNS) — Under cloudy skies and blustery winds, thousands of people gathered Nov. 22 at the spot where President John F. Kennedy was assassinated 50 years ago to the day, a tribute to his legacy and a ceremony many local officials also hoped would finally wipe the stain away from Dallas’ darkest day.

The gathering at Dealey Plaza was a stark contrast to Nov. 22, 1963, a sunny day that allowed the president, first lady Jacqueline Kennedy, Texas Gov. John Connally and his wife, Nellie Connally, to travel through downtown Dallas in an open limousine greetings thousands of people on the streets.

The memorial ceremony, across the street from the building from where the fatal shots were fired, had been in the planning stages for a year.

In 1963, many civic leaders were critical of the president and anti-Kennedy propaganda and sentiment had been spreading prior to his arrival. When he arrived in Dallas, thousands of people had lined the streets from Love Field through downtown Dallas and to the Dallas Trade Mart.

As his motorcade passed through Dealey Plaza, on the western edge of downtown, Lee Harvey Oswald, the Warren Commission later determined, fired three shots from the sixth floor of the Texas School Book Depository. Two of those struck the president. Connally was wounded by shrapnel.

Kennedy was pronounced dead at Parkland Hospital, his body hastily placed in a casket and loaded onto Air Force One. There, Vice President Lyndon B. Johnson took the oath of office and the plane headed to Washington.

At the somber memorial ceremony in Dallas, security was tight, with many offices and government buildings closed. Flags were lowered to half-staff and, because of low clouds and temperatures in the low 30s, a missing man formation flyover and performance by the Dallas Symphony Orchestra were scratched.

Dallas Bishop Kevin J. Farrell gave the invocation, recalling Kennedy’s vision, the tragedy that unfolded that day and the need to move forward.

“Almighty and ever faithful God, we lift up our minds and hearts to you today because you, Lord, have lifted us up from the horrible tragedy enacted in this place, from the cruel suffering that was born on this hill, from the shock and horror that gripped our nation and from the years when we as citizens of this city suffered and were implicated by the gun shot by one man that killed a president in whom many of us had set our hopes and dreams for a better America,” Bishop Farrell said.

“You turned our grief into a resolve to refashion our city to a place where life flourishes and true love abounds,” the bishop continued. “You turned our devastation to a commitment to rebuild here the city of God; a city where all are welcomed, nurtured and cared for.”

Mayor Mike Rawlings talked about the “nightmarish reality” that unfolded “in our front yard” and that not only Americans grieved, but others across the world. He said that everyone had to stand up to the challenges and visions that Kennedy had provided.

He also said that it is time to move on.

He said Dallas is a different city because of the hard work of many people to improve the substance, not merely its image.

The mayor called for a moment of silence at 12:30 p.m., and bells from churches across the city tolled at the moment that the shots were fired 50 years ago.

Many of those who gathered for the ceremony had to stand through a cold and steady mist, wearing ponchos given to them by event organizers because umbrellas were barred from the ceremony.

Orlando and Mariva McDaniel, members of Holy Cross Catholic Church, a predominately African-American parish in Dallas, were among those who got tickets. McDaniel said he was 2 years old and living in Lake Charles, La., when Kennedy was assassinated.

“It wasn’t until I got to grade school that I really understood all of what my parents and grandparents had been saying. As a minority, it was really about all of the changes that were taking place,” he told The Texas catholic, newspaper of the Dallas Diocese. “Being a part of this is like being part of history. Being here is a once-in-a-lifetime opportunity.”

Over the past several weeks, thousands of people, including news crews and conspiracy theorists from across the globe, descended on Dallas. The Sixth Floor Museum, located in the old Texas School Book Depository, has reported record numbers of visitors.

Two white “X’s” painted on Elm Street at the spot where Kennedy was shot were removed by city workers early in the week, some saying that those were not officially placed there by the city.

David Hicks, 42, of Arlington, Texas, said he surprised his mother with tickets for the event.

“It is a very special occasion,” he said. “It shows that Dallas has moved on. It’s not the evil city that it was depicted to be.” 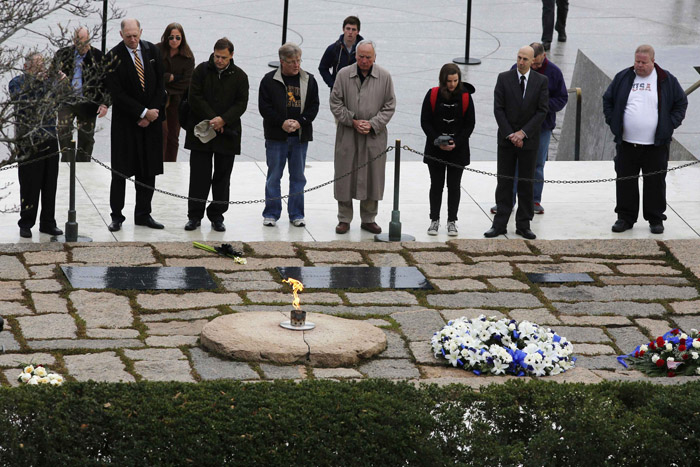 Visitors pay their respects Nov. 22 at the gravesite of the late president John F. Kennedy at Arlington National Cemetery to mark the 50th anniversary of his assassination. (CNS photo/Larry Downing, Reuters)

NEXT: Young people weary of ‘culture of death,’ says founder of Live Action