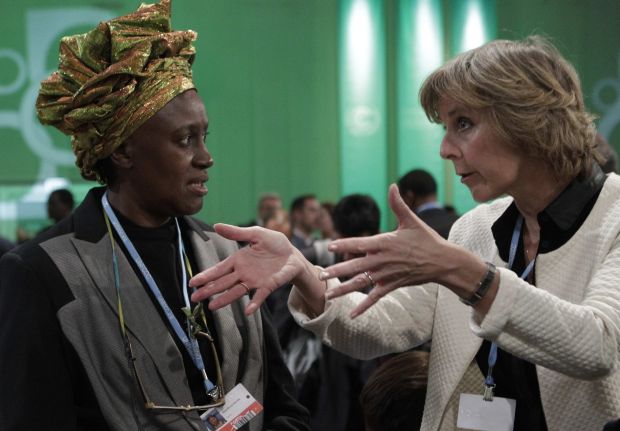 Archbishop Celestino Migliore told attendees at a church-run conference that the Vatican would help “form consciences and ethical perspectives” on climate change in line with Catholic social teaching and encourage “fairness, impartiality and mutual responsibility” when it came to action to address the environmental threat.

The church-run conference met Nov. 18-19, coinciding with the intergovernmental Conference of Parties of the U.N. Framework Convention on Climate Change that also convened in the Polish capital.

The conference, hosted by Caritas Poland and Warsaw’s Cardinal Stefan Wyszynski University, brought together Catholic leaders, politicians, climate scientists and civil society groups, who called on governments to reduce their reliance on coal, oil and other fossil resources.

The Warsaw Conference of Parties, meeting Nov. 11-22, was called to review progress since the 1997 Kyoto Protocol on reducing greenhouse gas emissions. It was the 19th such gathering to review the Kyoto accord, which was extended in December 2012 in Doha, Qatar, with a new commitment to cut carbon dioxide emissions by 18 percent by 2020.

“The crisis situation humanity currently faces has an economic, consumerist, environmental and social character, but is also fundamentally moral,” Archbishop Migliore told the ecumenical conference, which included representatives of Misereor, the German bishops’ organisation for development; CAFOD, the British bishops’ agency for international development; and the Washington-based Center of Concern.

“If we accept that every person and community has the same right to use the atmosphere, then they also have the same duty to protect them. The scale of emissions must be proportionate to the size of population, emissions per capita and the level of (gross domestic product),” the archbishop said.

“Governments are listening — they’re open to their constituencies and ready to hear a spiritual message about faith and morality,” said Markus Drake, spokesman for CIDSE, a Brussels-based alliance of 17 Catholic aid groups. “All faith-based organizations should be stepping in to provide this message and give stronger arguments to those ready to act, as well as connections with people around the world who are personally witnessing the effects of global warming.”

Drake told Catholic News Service Nov. 20 that he hoped Catholics “still unconvinced about climate change” would be persuaded by recent findings, including a September assessment report by the Intergovernmental Panel on Climate Change that human activity was its “dominant cause.”

He added that many Catholic parishes worldwide were taking initiatives to help those affected and said he hoped aid agency warnings would now also be “picked up by church structures and institutions.”

Jean-Pascal van Ypersele, vice chairman of the IPCC, said the panel’s evidence had been accepted by all governments and 97 percent of world scientists, adding that “clear evidence” suggested Super Typhoon Haiyan, which wrecked the central Philippines Nov. 8, was linked to climate change. Van Ypersele is professor of climatology and environmental sciences at the Catholic University of Louvain and advises bishops in Europe and Asia.

Auxiliary Bishop Theotonius Gomes of Dhaka, Bangladesh, said he believed awareness was growing of the “justice and charity aspects” of climate change, and he urged churches to join “a new type of revolution of increasing spiritual and humanistic awareness.”

Connie Hedegaard, European commissioner for climate action, said she believed churches had a role to play in recalling the “forgotten spiritual dimension” underlying economic development and applying pressure “without waiting for political decisions.”

With participation by more than 190 governments, COP was seeking to lay the groundwork for a new deal on global emissions in 2015, while pressing developed countries to deliver on $100 billion already pledged annually under a Green Climate Fund to help developing countries adapt to climate change.

Among submissions to the summit, the World Health Organization estimated that climate change was already causing an additional 140,000 deaths annually. The World Bank said Nov. 18 the costs of “more extreme weather related to a warming planet” were set to grow, with developing countries “bearing the brunt” from floods, storms and droughts.

The report said annual economic losses had risen from $50 billion in the 1980s to almost $200 billion in the last decade, while the world had lost 2.5 million people because of climate-related natural disasters.

Drake told CNS that CIDSE members would bring a “southern voice” from Asia, Africa and Latin America to meetings with government and parliamentary delegations at COP. The organization planned to carry an “honest, clear message from people affected by climate change” to a Nov. 21 side event with the World Council of Churches, which said in an early November statement that faith communities had “reached consensus in addressing the climate change crisis.”

PREVIOUS: Pope prays for peace, full religious freedom for all in Middle East

NEXT: Pope: Social doctrine keeps finance from falling prey to idol of profit