Pope prays for peace, full religious freedom for all in Middle East 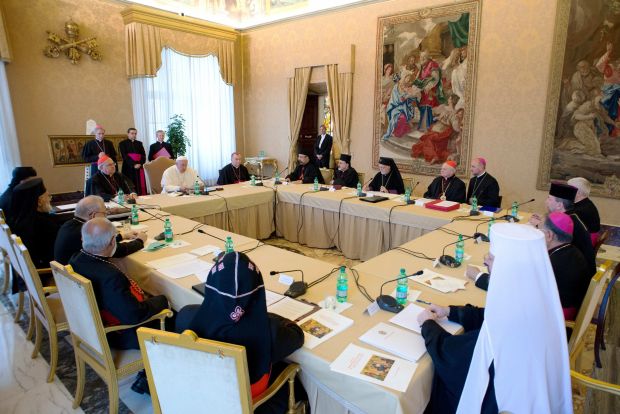 Pope Francis attends a meeting with the patriarchs and major archbishops of the Eastern Catholic churches in Syria, Iraq and and other parts of the Middle East, at the Vatican Nov. 21. (CNS photo/L'Osservatore Romano via Reuters)

VATICAN CITY (CNS) — After a two-hour private meeting with the patriarchs and major archbishops of the Eastern Catholic churches, Pope Francis prayed for peace and full religious freedom throughout the Middle East.

Referring to himself, he said “the bishop of Rome will not be at peace as long as there are men and women — of any religion — harmed in their dignity, deprived of what is necessary for their survival, robbed of their future or forced to become refugees.”

“Let us make an appeal so that the right of everyone to a dignified life and to freely profess their faith is respected,” the pope said Nov. 21 during a meeting with all of the members of the Congregation for Eastern Churches.

The large gathering followed the private meeting with 10 heads of Eastern churches and the Latin-rite patriarch of Jerusalem, mainly to talk about the situation of Christians in Syria, Iraq and other parts of the Middle East.

But Pope Francis said they also spoke about the rebirth of the Armenian, Ukrainian, Romanian and other Byzantine churches oppressed under communism in the 20th century and the missionary dynamism of the Syro-Malabar and Syro-Malankara Catholic churches based in India.

He said he listened to the patriarch of Jerusalem and the Coptic, Syrian, Melkite, Maronite, Chaldean and Armenian patriarchs testify to the perseverance of their faithful in the Middle East where they often are small minorities “in environments marked by hostility, conflict and even hidden persecution.”

“At times,” he said, “Syria, Iraq, Egypt and other areas of the Holy Land flow with tears.”

Despite the dangers and the desire of many Christians to immigrate to places where they can raise their families in peace, the pope said, “we cannot resign ourselves to thinking of a Middle East without Christians, who for 2,000 years have professed the name of Jesus.”

The region’s Christians, he said, deserve to be recognized as citizens of their countries with full rights, including religious freedom.

Despite the challenges Catholics in the Middle East face, “the light of faith has not been extinguished, but rather shines brightly,” he said, and every Catholic owes them gratitude.

The world’s Christians can look to the Christians of the Middle East and learn the patience and hard work that goes into “the daily exercise of a spirit of ecumenical and interreligious dialogue,” Pope Francis said. “The geographical, historical and cultural context in which they have lived for centuries, in fact, has made them the natural interlocutors for numerous other Christian confessions and other religions.”

Pope Francis asked all Catholics to pray that God would bring reconciliation and peace to the region.

“Prayer disarms the foolish and generates dialogue where there is conflict,” he said, adding that with sincere and persevering prayers the voice of Christians becomes “meek and firm, able to make even national leaders listen.”

Referring to Jerusalem as the place “where all of us were spiritually born,” Pope Francis prayed that Blesseds John XXIII and John Paul II, “untiring peacemakers on earth, would be our intercessors in heaven” to bring peace to the Middle East.