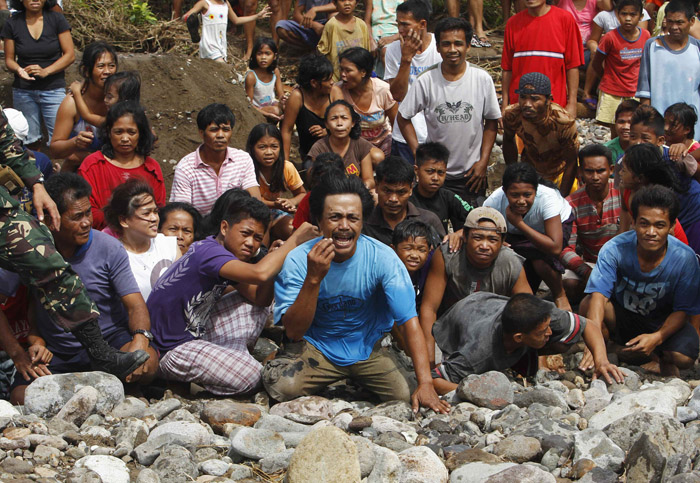 Desperate villagers who had yet to receive any relief aid react as a U.S. helicopter arrives to deliver supplies in a remote village off Guiuan, Eastern Samar, in central Philippines, Nov. 20. Philippine authorities, the U.S. military and international agencies face a mounting humanitarian crisis, with an estimated 4 million people displaced by Typhoon Haiyan when it came ashore Nov. 8. (CNS photo/Edgar Su, Reuters) 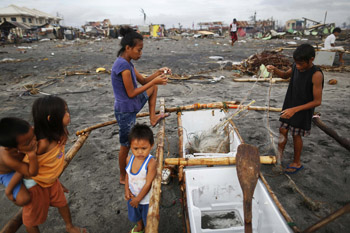 A boy cleans a fishing net by a boat made from a broken refrigerator after he returned to his destroyed village in Tanauan, Philippines, Nov. 20. After losing their boats and houses in Typhoon Haiyan, fishermen of the destroyed village started building two-seated boats made from abandoned refrigerators and some wood. The first boat was made by a fisherman, whose children gave him the idea because they wanted to play in it, and soon others followed. (CNS photo/Damir Sagolj, Reuters)

Sandra Harlass, emergency relief coordinator and health adviser for Malteser International, was concerned about getting emergency food to displaced residents in Eastern Samar, the easternmost province among the central islands that took the first lashing from Haiyan.

“The needs are basically huge,” said Harlass, who had just returned to Manila from the tiny towns of San Antonio and Amandayehan, across the strait from the worst-hit city of Tacloban. “Ninety percent of the houses are destroyed … most were just washed away from the storm surge.

“Together with the houses, of course, all the food supplies were washed away, all the nonfood items, like blankets, mosquito nets, everything is just gone,” she said.

The team of assessors found people who had had very little to eat nine days after the storm struck. Harlass said one of the villages had received food from the government once; the other had none.

“Overall, they are highly food insecure because there is no schedule of regular food delivery, so people don’t know when the next food (is) coming,” she told Catholic News Service Nov. 18. “What they usually receive is (5 pounds) of rice for a family, which just lasts a day, maybe two.”

Harlass said the organization was getting food and basic supplies to these villagers and they had a longer-range plan of providing food for 30 days.

Across the water to the west, in the province of Leyte, Jennifer Hardy, Asia region spokeswoman for Catholic Relief Services, was standing inside the shell of the cathedral in Palo, just south of Tacloban.

Hardy told CNS by phone that the roof, which had undergone a multi-million dollar facelift four months ago, was completely gone. She said some people left homeless by the storm were living on the cathedral grounds. Hardy had just interviewed a family living under one of the hanging rafters of the church.

A 15-foot storm surge whacked Tacloban after the Nov. 8 typhoon, creating a tsunami-like effect that swallowed up people in its fast-rising floods and left bodies strewn about in its wake. This area suffered a majority of the 4,000 deaths recorded so far. The typhoon’s winds knocked down trees, power lines and houses, leaving a jumble of debris that cut off entire villages and left hundreds of thousands of people hungry for days.

Hardy said she was “so thankful” that the church was there, in the midst of the devastation “not just coordinating relief goods through CRS and local churches, but also giving that important pastoral care.”

She said the priests were taking the time to talk people through their grief, even as the priests themselves were grieving. “And offering hope through faith,” she added.

Hardy met a priest from San Joaquin Parish just south of Palo, who had so far buried about 300 parishioners in the church’s backyard. His church of 800 regular parishioners had diminished to 200, with the deaths and so many people fleeing the devastation.

“This grave, it is just the saddest thing,” she said. “It’s a mass grave, but they’ve tried to honor the dead with headstones, or simple crosses or plaques. One of the assistants there who has to dig the graves, he’s the one personally carving with a penknife into wooden boards, to try to mark the graves.”

In the two small towns of Eastern Samar, the death toll from Haiyan was fewer than 100. Harlass said residents prayed together every night with their local priests “for those that are still missing, for those that passed away.”

“And they said it’s for them, also, a relief to be together as a group and to share this grieving,” she said.

Hardy said donations to CRS had been coming in but “being here on the ground, the need is just staggering. Every single dollar that people have donated is vital and essential and is going to a really good purpose.

“There’s an overwhelming amount of need and it’s good that the church has this (aid) network, because one organization, one entity, could never even begin to deal with this on its own,” she said. 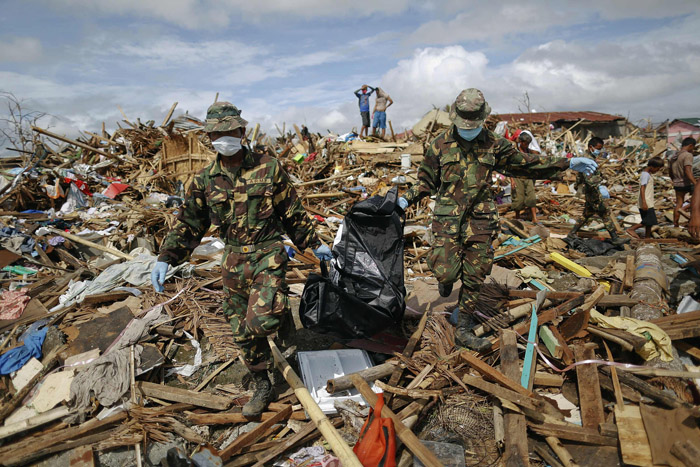 NEXT: Egyptian university hoping to restart stalled talks with Vatican