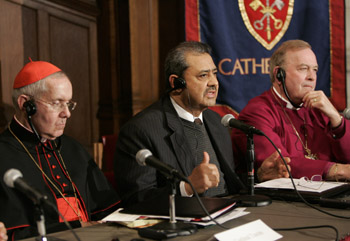 Sheik Ahmad Mohamed el-Tayeb, president of al-Azhar University in Cairo, is flanked by Cardinal Jean-Louis Tauran, president of the Pontifical Council for Interreligious Dialogue, and Episcopal Bishop John Bryson Chane of Washington during a March 2010 dialogue between leaders of Christian and Muslim faiths in Washington. Officials at Al-Azhar are hoping to restart stalled talks with the Vatican. (CNS photo/Nancy Wiechec)

CAIRO (CNS) — Officials at Egypt’s Al-Azhar University said they are eagerly awaiting a message from the Vatican that could jump-start their stalled talks.

Their dialogue faltered and was eventually suspended altogether by Al-Azhar in 2011 after a series of remarks made by now-retired Pope Benedict XVI.

“We are going to receive him, and we are very open and very ready to re-establish dialogue,” Azab told CNS in his Cairo office in mid-November.

Father Greiche, reached by telephone, confirmed he had recently paid a visit to Al-Azhar, considered the world’s highest authority on Sunni Islam, but declined to give further details.

However, a highly placed Catholic official in Cairo, speaking on condition of anonymity, confirmed to CNS that Comboni Father Miguel Ayuso Guixot, secretary of the Pontifical Council for Interreligious Dialogue, would be in Egypt in December “to meet the imam and see if he will go back to the dialogue.”

Cordial ties between Al-Azhar and the Vatican started to fray in 2006, after Pope Benedict gave a speech in Regensburg, Germany, which Al-Azhar officials and millions of Muslims said linked Islam to violence.

At the time, Al-Azhar asked for clarification and a retraction, but the Vatican and many Catholic officials responded that Pope Benedict had been citing a 14th-century Byzantine text, that his words were taken out of context and that they had been misunderstood.

“The straw that broke the camel’s back,” Azab said, was Pope Benedict’s statement five years later about anti-Christian violence in Egypt and the need to protect religious minorities there following a Christmas Eve bombing of a Coptic Orthodox Church in the Egyptian seaport city of Alexandria.

“We got a letter signed by the new pope,” said an adviser to Al-Azhar University’s grand imam, Sheik Ahmad el-Tayeb. “I put a lot of importance on working together to realize a good understanding among our people,” Pope Francis’ letter reputedly said.

He said Al-Azhar considered the remarks biased at a time when many of the Middle East’s people, Muslims and Christians alike, were suffering due to war and other hardships.

“We responded that we expected from His Holiness solidarity with all the people of the Orient who are living in a difficult period,” especially the Palestinians whose situation, Azab said, was “the heart and source of the violence” in the region.

“So we said, ‘Since dialogue is not advancing, we are suspending it, and when we find more fertile ground for dialogue, we will continue,'” said Azab.

Almost immediately after Pope Francis’ election last March, Al-Azhar expressed hope for “reassuring and productive signs so that dialogue can resume” with the Vatican, said Azab, adding that a week later the grand imam had also sent a letter of congratulations to the new pontiff.

In return, the grand imam received a letter of thanks from the president of the Pontifical Council for Interreligious Dialogue, Cardinal Jean-Louis Tauran, which al-Azhar rejected, Azab said.

“We said, ‘No, it is the pope who counts for us,’ and (the Vatican) responded ‘No, the pope doesn’t usually do this,’ so we said ‘Please make an exception because there is only one grand imam and one Al-Azhar in the world,'” Azab recounted.

“A bit later … it was magnificent. We got a letter signed by the new pope,” continued Azab. “His Holiness said, ‘I put a lot of importance on working together to realize a good understanding among our people,'” Azab quoted Pope Francis’ letter as saying.

Azab said that, despite the suspension of talks with the Vatican, Al-Azhar had “never stopped dialoging” with local and international churches and their members.

He said that under the auspices of Al-Azhar, Egyptian education experts, including some trained in the United States, were now plying through all of Egypt’s primary- and secondary-school textbooks to locate and “rectify … anything that could incite hatred.” He said another Al-Azhar initiative was engaged in gathering sheiks and priests around the country at two- and three-day retreats to learn more about each other’s communities and promote understanding.

A wave of violence following the Egyptian army’s July 3 removal of Islamist President Mohammed Morsi led to the looting and destruction of at least 40 churches around the predominantly Muslim country. Azab blamed the violence, which also included attacks on government buildings and police, on “fanatics” who did not understand the true nature of Islam, or who were using Islam “as a tool.”

“Things are advancing very well here inside Egypt, despite what you hear of the violence (and) despite the angle taken by some Western media and channels,” he added.

Al-Azhar fully supported the military’s takeover because it had come at the behest of “34 million Egyptians,” and had prevented “civil war,” said Azab.

“For us, it was not a coup d’etat … it was a true revolution of the people, supported by the army to maintain peace,” he said.

He said that the 2011 revolution that ended the decades-long rule of former President Hosni Mubarak had been a call for social as well as political change, and that Al-Azhar had since come up with a document emphasizing that it did not support theocratic or autocratic forms of leadership. The document outlined four basic principles it said any new Egyptian government must ensure: freedom of belief, freedom of opinion, freedom of scientific research, and freedom of creativity.

NEXT: Vatican, Google team up to bring ancient Christian catacombs to light