In Central African Republic, thousands turn to bishop for protection 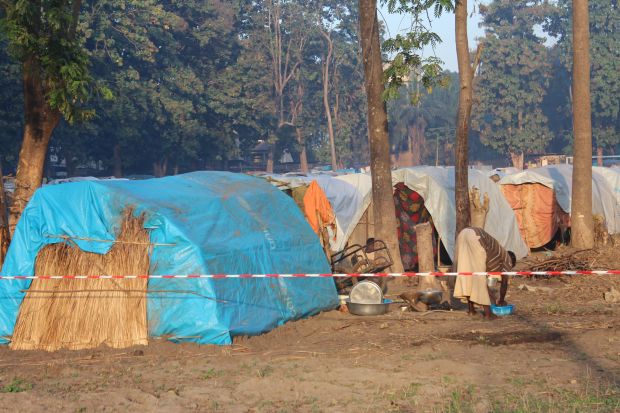 WASHINGTON (CNS) — More than 35,000 people are living on the 40-acre diocesan compound in Bossangoa, Central African Republic, seeking protection from rebels who are targeting Christians, said the local bishop.

“The priests have been sharing their rooms in their private apartments,” said Bishop Nestor-Desire Nongo Aziagbia of Bossangoa, who visited Washington in mid-November. “The only place that has not been used is my private apartment.”

Bishop Nongo told Catholic News Service he closed the minor seminary, which is now used as a shelter, and the pastoral center has been destroyed. He said the Catholic aid agency Caritas has an office in the compound, but people also live in the office.

The people began coming Sept. 8 to escape attacks by rebels of the Seleka alliance, most of whom are foreign mercenaries and do not speak the local language. The rebels are predominantly Muslim; Central African Republic is about 85 percent Christian and 12 percent Muslim.

Bishop Nongo said the U.S. bishops’ Catholic Relief Services sent emergency help in mid-September, and the World Food Program sent help in late September, “but it is not really enough.”

Most of the people in the diocesan compound are women and children, the bishop said. To protect their families, the men do not stay, fearing they will attract rebel soldiers, who will accuse them of being members of civilian defense forces and kill them.

The bishop said the women have been risking rape and attacks to go out to their farms to harvest food, but soon all the crops will be gone, and the next planting season is May and June.

The bishop spoke to Catholic News Service Nov. 19, after testifying about his situation before the House Subcommittee on Africa, Global Health, Global Human Rights and International Organizations.

He told CNS when he called his vicar general early that morning, he learned that, the previous night, rebels had surrounded the diocesan compound and threatened those inside with a rocket attack.

“So, last night, nobody could sleep,” he said. 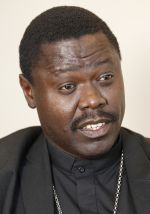 Bishop Nongo said that, every day, he receives messages from villages about violence and abuse. The people are “turning to me” to solve their problems, but “I’m not the government,” he said. He added that he passes along the information, but nothing happens.

He said that before he left Nov. 13, he did not mention his trip to the displaced residents, because he did not want to frighten them.

“As they saw me (leaving) in the car … some started weeping,” he said.

In his testimony submitted to the House subcommittee, Bishop Nongo said Seleka was pitting the country’s Christian and Muslim citizens against each other.

“Seleka’s violent attacks have targeted Christian homes, schools and places of worship while sparing local Muslim communities and mosques, often only a short distance away,” he said. “Christian communities have now begun to set up self-defense militia to fight back. Sadly, there are reports that they are attacking Muslim communities in retribution.”

He testified that when Seleka militia raid villages and steal livestock, they pass it on to Muslim herders, since herding is part of their shared culture.

“Inevitably, Christians see local Muslims herding the cattle that Seleka stole from them,” he said in his testimony. “This has left some Christians to believe the Central African Muslim community is in league with the Chadian and Sudanese mercenaries and is benefitting from Christian losses.” He added that had possible internal ramifications even if the mercenaries left the country.

Since the March coup in which Seleka rebels overthrew the government, about 440,000 citizens have been displaced, the bishop said, “and no one knows how many people have died.”

“The road south to the capital, Bangui, over 200 miles away, is deserted,” he said in his testimony. “Villagers have fled to escape the attacks, mass killings, rape and plundering perpetrated by the roaming groups of Seleka militia,” who have divided up the country and established regional control.

He said interim president Michel Djotodia, who led the March coup, formally dissolved the Seleka alliance in an effort to end the violence, but “he has no formal army to enforce peace and security.”

The bishop urged congressional leaders to work with France, the African Union and the U.N. to provide immediate assistance to help secure the country and “compel Seleka forces to disarm, demobilize and reintegrate into society or return to their home countries.”

He also asked them to fund humanitarian assistance and a “transition process to a legitimate, democratically elected government.” He noted the country would need continued assistance for years and asked them to rally the international community.

After his testimony, Bishop Nongo was headed home to continue to provide his people with support and to work with local Muslim leaders.

He told CNS that when Christians see atrocities, the temptation for retaliation was great.

But he said both Muslims and Christians are victims of Seleka, and he tells his people, “Never give in to such temptation.”

NEXT: Pope prays for peace, full religious freedom for all in Middle East