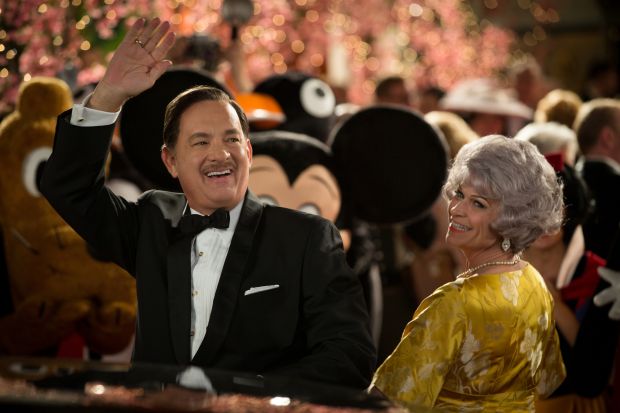 NEW YORK (CNS) — Fifty years after the premiere of the Walt Disney musical “Mary Poppins” comes “Saving Mr. Banks” (Disney), a film about the making of that 1964 classic.

Who would have guessed that behind the scenes of such a widely beloved movie lay a battle of wills worthy of a grand Shakespearean drama, with swords crossed over details as simple as … “Supercalifragilisticexpialidocious”?

Director John Lee Hancock (“The Blind Side”) serves up a delightful mix of nostalgia and sentimentality as he recreates the Hollywood dream factory of the early 1960s.

The witty script by Kelly Marcel and Sue Smith is based on a true story. Walt Disney (Tom Hanks) promised his daughters he would make a movie from the children’s books they loved — tales of the magical nanny Mary Poppins, written by Pamela Travers (Emma Thompson) under the pen name P.L. Travers.

For two decades, Disney lobbied for the film rights, to no avail. But when Travers’ fortune eventually dried up, she was forced to reconsider.

Against her better judgment, she packs her bags and heads to California, determined to protect her prized creation from being “Disney-fied.”

“I won’t have her turned into one of your silly cartoons!” she warns Disney. “You don’t know what Mary Poppins means to me.”

Disney and Travers are polar opposites. Disney, gregarious and ever sunny, is countered at every suggestion by the prickly, buttoned-up author, who is no fan of Hollywood. He launches an all-out charm offensive, including a guided tour of Disneyland, but without result.

Faring no better are the songwriters, the famous Sherman brothers, Richard (Jason Schwartzman) and Robert (B.J. Novak). Travers is opposed to turning her book into a musical, and repelled by the chirpy songs that have become iconic, including “A Spoonful of Sugar” and “Chim Chim Cher-ee.”

Things look pretty bleak until Disney senses an opportunity. Delving into Travers’ background, he discovers there is an intensely personal side to Mary Poppins.

In flashbacks to Travers’ impoverished childhood in rural Australia, we learn that her Aunt Ellie (Rachel Griffiths) was the model for the nanny, and her adored but flawed father, Travers Goff (Colin Farrell), the inspiration for the fictional George Banks of the title.

Although the ending of this story is well-known, “Saving Mr. Banks” has many surprises in store as it veers from comedy to tearjerker and back again. Parents should be aware of emotional moments which may be too intense for pre-teens. Overall, though, the sincerity and wholesomeness of the picture make for a welcome change at the multiplex.

The film contains mature themes, one use of profanity and a mild oath. The Catholic News Service classification is A-II — adults and adolescents. The Motion Picture Association of America rating is PG-13 — parents strongly cautioned. Some material may be inappropriate for children under 13.

NEXT: Inside the vivid imagination of ‘Walter Mitty’