Pope, on feast of first martyr, prays for persecuted Christians 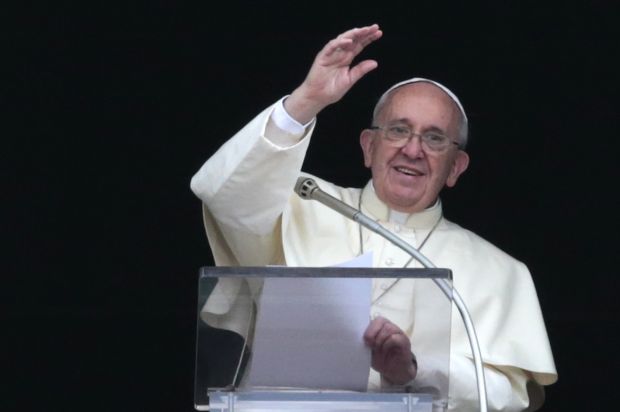 Pope Francis waves as he leads the Angelus from the window of his studio overlooking St. Peter's Square at the Vatican Dec. 26. (CNS photo/Tony Gentile, Reuters)

VATICAN CITY (CNS) — Observing the feast of the church’s first martyr, Pope Francis prayed for Christians suffering persecution and discrimination around the world, even in countries that nominally honor religious liberty.

The pope made his remarks Dec. 26, the feast of St. Stephen, before praying the Angelus from his window overlooking St. Peter’s Square.

“Today we pray in a particular way for Christians who undergo discrimination because of their witness to Christ and the Gospel,” he said. “We are close to these brothers and sisters who, like St. Stephen, are unjustly accused and made targets of violence of various kinds. I am sure that, unfortunately, there are more of them today than in the early days of the church. There are so many.

“This (persecution) happens, especially where religious liberty is not yet guaranteed and fully realized,” Pope Francis said. “But it also happens in countries and societies that protect liberty and human rights on paper, but where, in fact, believers, especially Christians, encounter abridgements of liberty and discrimination.”

The pope then led the crowd in the square in prayer for persecuted Christians, first with a moment of silence and then with a recital of the Hail Mary.

“For the Christian, (persecution) is no surprise, because Jesus foretold it as a propitious occasion for bearing witness,” he added. “Nevertheless, in the civil sphere, this injustice must be denounced and eliminated.”

Pope Francis said that commemorating St. Stephen’s martyrdom might seem to clash with the spirit of Christmas, the “feast of life which inspires us with sentiments of serenity and peace. Why disturb its enchantment with the memory of such atrocious violence?”

But the pope said the feast of St. Stephen, who died asking forgiveness for his killers, is “fully in tune with the deep meaning of Christmas. In martyrdom, in fact, violence is defeated by love, death by life.”

Pope Francis said remembering the first martyr dispels a “false image of Christmas, sugary and fairy-tale like, which is not found in the Gospel. The liturgy recalls for us the authentic sense of the incarnation, linking Bethlehem to Calvary and reminding us that divine salvation implies the struggle against sin and passes through the narrow gate of the cross.”

The pope did not mention specific countries but, the previous day, three separate bombings in Baghdad killed at least 37 people. Two bombs exploded in an outdoor market of a Christian neighborhood, killing at least 11 and wounding 21, and a car bomb exploded near a Catholic church, killing at least 26 and wounding 38. The Associated Press reported that the bomb exploded after Christmas Mass, but no one who attended the Mass was injured.

Chaldean Catholic Patriarch Louis Sako of Baghdad said he did not believe the church was the target. He has, however, noted that the number of Iraqi Christians has dropped to fewer than 600,000 since 1987, when they numbered 1.2 million.

NEXT: Big issues, events loom in new year for Vatican