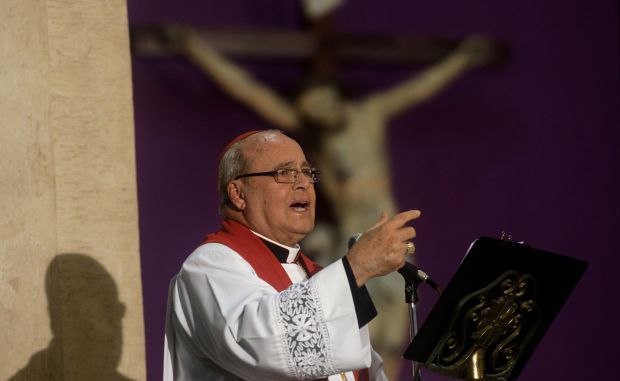 HAVANA (CNS) — When the Cuban bishops’ conference announced its new officers in November, Cardinal Jaime Ortega Alamino was not in a leadership position.

As required by canon law, the 77-year-old archbishop of Havana submitted his resignation in 2011, and his replacement as vice president of the conference triggered speculation he would soon be replaced in the capital city.

Church leaders often serve years beyond when they submit their resignations. When Cardinal Ortega submitted his papers, the Cuban church was about to celebrate the 500th anniversary of the discovery of the image of Our Lady of Charity of El Cobre, Cuba’s patroness.

In August, the cardinal will celebrate the 50th anniversary of his priestly ordination.

In the meantime, the search for his replacement has already begun, at least among church analysts and members of the media outside the island.

Eduardo Mesa, a Cuban Catholic who headed the Havana archdiocesan magazine then known as Espacios, now lives in Miami. He said he believes Cardinal Ortega’s replacement will be chosen from among the bishops serving in Cuba.

In his blog “Cuba Plural,” he writes that, “given the complexities of the archdiocese and of Cuba, it is not likely that a priest would be chosen for that job.” The possibility of appointing a Cuban bishop serving outside Cuba would always remain open, but it is not probable.

The church in Cuba has three archbishops, including the cardinal, and 10 bishops, two of whom serve as auxiliaries in Havana. Though the Vatican estimates about 60 percent of Cubans are Catholic, local church officials estimate that only about 2.5 percent of Cuba’s population of 11 million can be considered practicing.

In selecting the future archbishop for the capital, Pope Francis could consider several aspects: a candidate’s age and overall health, his pastoral profile and experience and the complexity of the country and of the dioceses involved.

Should the pope want a “transition” archbishop, in terms of the number of years, he might select Bishop Jorge Serpa Perez of Pinar del Rio. The 71-year-old bishop served 31 years as a missionary in Colombia. Upon returning in 1999 he served as vicar general in Havana and as rector of the archdiocesan seminary, so he is familiar with the archdiocese.

Bishop Manuel de Cespedes Garcia Menocal of Matanzas, 69, also could be a transition archbishop. He was born in Havana and in 1960 emigrated to Puerto Rico, where he became an electronic engineer. He eventually entered the seminary for late vocations in Venezuela, where he was ordained and served for 12 years. In 1986 he returned to Cuba, serving as chancellor and vicar general in Pinar del Rio, until he was appointed bishop of Matanzas in 2005.

Civic activist and intellectual Dagoberto Valdes, who worked closely with Bishop Cespedes in Pinar del Rio, describes him as a man who has a vision for the future.

At 68, Archbishop Dionisio Garcia Ibanez of Santiago de Cuba is serving a second term as president of the bishops’ conference, and analysts say he is performing well. His vocation to the priesthood emerged after years of professional life as a communications engineer. He is from Guantanamo and served as a priest in eastern Cuba until 1995, when he was named founding bishop of the Diocese of Bayamo-Manzanillo. In 2007 he was appointed to his current position in the second-most important city in the island.

Pope Francis also might consider a number of younger bishops.

Among them is 63-year-old Bishop Emilio Aranguren Echeverria of Holguin; only Cardinal Ortega has been a bishop longer than he has. For 14 years, while Bishop Aranguren was bishop of Cienfuegos, he served as the Cuban bishops’ conference secretary-general, a job that gave him ample opportunities to relate to representatives of the Bureau of Religious Affairs in the Central Committee of the Cuban Communist Party. He has also served on the Economic Committee of the Latin American bishops’ council, CELAM, and is well-connected to other Latin American prelates.

Mesa told Catholic News Service Bishop Aranguren would be a good candidate because “he has great capacity for work, is a good administrator and has pastoral vision.”

Bishop Juan Hernandez Ruiz, 65, is a Jesuit who has served as auxiliary bishop of Havana since 2006. As such, he already knows the archdiocese has good rapport with the clergy and, being a Jesuit, he is well acquainted with the issues that religious life faces in Cuba. His nomination would not effect changes in other dioceses, as the nomination of other bishops would.

A name that rarely is mentioned by the media as a possible candidate is Archbishop Juan Garcia Rodriguez of Camaguey. The 65-year-old is very much a bishop in the style of Pope Francis. Known for his missionary spirit and as a man of prayer, he has the ability to remain calm in the midst of any storm. He has served as president of the Cuban bishops’ conference and represented Cuba in the 2007 meeting of Latin American and Caribbean bishops in Aparecida, Brazil, in 2007.

The youngest candidate is Bishop Arturo Gonzalez Amador, who will turn 58 Jan. 16. Within the Cuban bishops’ conference, he has the important task of dealing with Cubans in the diaspora. His appointment would mean bypassing other bishops with more experience and years of service.

Araceli Cantero is former editor of the Miami archdiocesan Spanish paper, La Voz Catolica. She has traveled extensively in Cuba since 1986 and currently spends extended stays in the Diocese of Holguin, collaborating in the formation of the laity and Catholic communicators.

NEXT: Experts praise new Vatican laws, but ask for inspection of Vatican bank