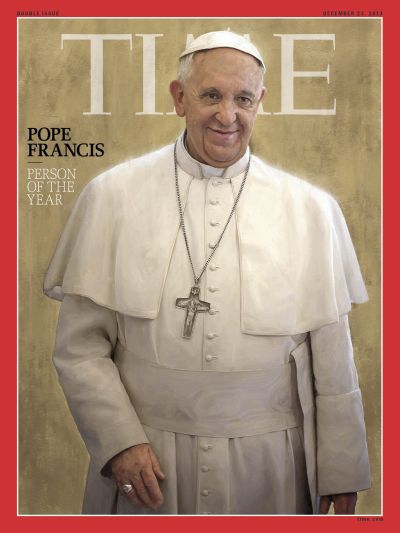 The cover of Time magazine’s Person of the Year issue, featuring Pope Francis, is pictured in this Dec. 11 handout photo. (CNS photo/Time Inc., handout via Reuters)

VATICAN CITY (CNS) — Pope Francis is not seeking fame or accolades, but being named Time magazine’s Person of the Year will make him happy if it helps attract people to the hope of the Gospel, said the Vatican spokesman.

“It’s a positive sign that one of the most prestigious recognitions in the international press” goes to a person who “proclaims to the world spiritual, religious and moral values and speaks effectively in favor of peace and greater justice,” said the spokesman, Jesuit Father Federico Lombardi.

The choice of Pope Francis “is not surprising, given the wide appeal and huge attention” to his pontificate so far, Father Lombardi said in a written statement Dec. 11, shortly after Time announced it had named the pope for the annual feature.

“Rarely has a new player on the world stage captured so much attention so quickly — young and old, faithful and cynical — as has Pope Francis,” Time said on its website. “With a focus on compassion, the leader of the Catholic Church has become a new voice of conscience.”

Archbishop Charles Chaput congratulated the pope, saying in a statement that the holy father has “a remarkable way of uniting people of all cultures. He is a man deeply engaged in contemporary issues with an ability to speak to the modern heart. Pope Francis is a pastor God sends not just to the Church but to every person of good will who honestly yearns for justice, peace and human dignity in our time.

“May God grant him courage and joy as he continues to spread the Good News throughout the world,” the archbishop said.

Blessed John Paul II was named Person of the Year in 1994 and Blessed John XXIII in 1962.

Other past honorees include several U.S. Presidents, Mahatma Gandhi, Adolf Hitler, Josef Stalin and Mark Zuckerberg, founder of Facebook. The magazine says the title goes to the person or idea that “for better or worse … has done the most to influence events of the year.”

The pope “does not seek fame and success, because he serves to proclaim the Gospel and God’s love for everyone,” Father Lombardi said. But if the recognition “attracts women and men and gives them hope, the pope is happy.”

The spokesman added that Pope Francis would also be pleased if the magazine’s decision “means that many have understood, at least implicitly, this message” of hope.

NEXT: Cubans speculate about replacement for 77-year-old Havana cardinal