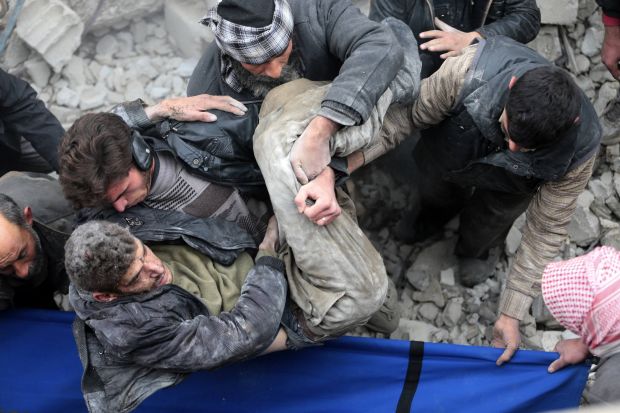 People carry a survivor from the rubble at a damaged site after what activists said was heavy shelling by forces loyal to Syrian President Bashar Assad in Damascus Dec. 26. (CNS photo/Bassam Khabieh, Reuters)

AMMAN, Jordan (CNS) — Some Syrian Christian refugees sheltering in neighboring Jordan did not have a happy Christmas, fearful for their uncertain future as the violent conflict in their homeland grinds on past 33-months with no end in sight.

“Just see how Christians in Iraq were targeted on our sacred holiday, Christmas Day, in Baghdad,” said Abu Reda, referring to bomb blasts that left at least 37 dead.

The 30-year-old Catholic entrepreneur once ran a successful beverage business in a suburb of the Syrian capital, Damascus, but now collects plastic containers from the streets to sell just to feed his family in exile.

He and his family of four huddled in front of a TV that broadcast Christmas programs over a Christian satellite channel in a cold, sparsely furnished apartment in the Jordanian capital. He used a familial name, rather than his given name, to protect relatives still in Syria.

A pair of calendars for the coming year with pictures of Jesus and the Holy Family adorned the otherwise bare living room walls. There was no Christmas tree in sight.

“Christians are being targeted in Syria. I was one and that’s why we fled here,” said Abu Reda.

Islamist extremists’ repeated threats of kidnapping and death forced Abu Reda and his family to flee about a year ago. The final straw was the killing of a cousin by extremists and the destruction of a family home.

Fighters from the Nusra Front, an Islamist militant group linked to the al-Qaida terror network, began putting messages on his shop’s door and later on his home.

“Selling alcohol is forbidden,” the messages read. “We consider your money to be ours and we’ll turn your wife and children into our slaves.”

Shortly afterward, Islamist rebels kidnapped his father and held him for 15 days until the area where he was being held was overrun by the Syrian government military, which released him.

Later, a cousin was kidnapped. The family was given too short a time to collect the ransom money, he said, and the man was killed.

Although, Abu Reda discovered that at least two men threatening him were former employees, reports to the Syrian government security services did not prevent the threats from stopping.

“The men warned me, ‘We will follow you wherever you go in Syria,’ he said, his dark eyes expressing the danger he felt for him and his family.

“We knew we had to leave because of the lack of central control and chaos now reigning in the country,” he added.

Abu Reda’s wife sobbed as she recalled the traumatic events.

“We are far away from our family at this Christmas. It is difficult. We want Christians to return to Syria as well as peace to come again to our homeland,” she said.

Abu Reda said he was grateful to the international Catholic charity, Caritas, and several Jordanian priests for practical help, including a space heater and other household basics. He praised the Franciscan Sisters for educational assistance to his 8-year-old daughter, Angie, and for providing his family with some basic furniture and a rug to help ward off the bitter winter cold in the apartment.

“My daughter refused to go to a Jordanian public school after they tried to make her wear the hijab, or Islamic headscarf,” he said. “I appealed to our priest and now she attends a Roman Catholic school in Amman and is much happier.

“I, like other Syrians, are used to working hard for a living. My money is running out. I am not permitted to work legally in Jordan,” Abu Reda said. “It’s my hope and that of other Syrian Christians in exile to be allowed to settle in the West, at least for the sake of our children’s future.”

“For us, Christians in Syria and Egypt, the so-called Arab Spring has brought lots of problems,” he said. “Rather I’d call it the Arab Destruction, not the Arab Spring.”

“Still as Christians, our hope is always in Jesus Christ, whom we trust will give us the strength to get through these very tough times,” he said.

NEXT: Pope, on feast of first martyr, prays for persecuted Christians