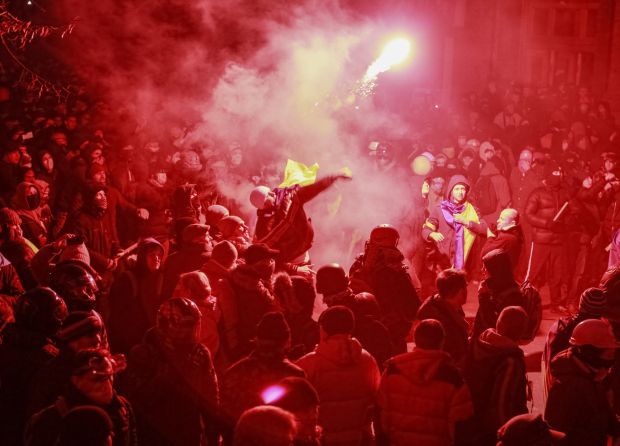 A man throws a flare in the direction of Interior Ministry members during a rally in Kiev, Ukraine, Dec. 1. (CNS photo/Gleb Garanich, Reuters)

KIEV, Ukraine (CNS) — The head of the Ukrainian Catholic Church and other Catholic leaders condemned police violence against “peaceful demonstrations” after President Viktor Yanukovich’s decision not to seek closer ties with the European Union.

Archbishop Sviatoslav Shevchuk, of Kiev-Halych, major archbishop of the Ukrainian Catholic Church, also spoke of preventing an “escalation of violence, which could lead to even more tragic consequences.”

“We must not respond to violence with violence and evil with evil,” he said.

Demonstrators barricaded Kiev’s Independence Square and urged a general strike to protest the president’s withdrawal from an EU association agreement, which was to have been signed at a Nov. 28-29 summit in Lithuania.

“Law enforcement agencies need to protect public order and promote the constitutional right to peaceful assembly and expression,” the council said in a Nov. 27 statement. 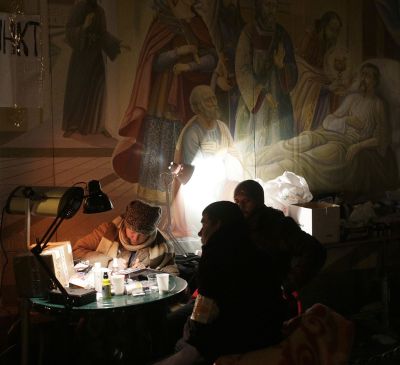 “Radicalization of these protests can only harm the people and national interests of Ukraine. In a civilized society like Ukraine, we must learn to express different views on social issues in a peaceful manner and through dialogue,” the council said.

Protesters blockaded the Cabinet office and other official buildings in the capital Dec. 2, demanding the resignation of Yanukovich and his prime minister, Mykola Azarov.

In a Nov. 30 statement, Cardinal Lubomyr Husar, Archbishop Shevchuk’s predecessor, criticized the president for backtracking on the agreement, which is strongly opposed by neighboring Russia. However, the cardinal said “people power” required “peaceful, coherent, joint activities,” rather than violence.

Ukraine’s Catholic University accused the government of “sending hired thugs” to “fuel a body confrontation” Dec. 1 in front of Kiev’s presidential palace, but warned protesters against revenge, “no matter how strong the motivation is.”

“The consequences of the actions of both sides are the same: an encroachment on peaceful protests by a million people throughout Ukraine,” the Lviv-based university said in a Dec. 2 statement. “The present time does not require an elite which cynically robs the people, nor seekers of revenge wishing harm to their enemies, but people willing to serve by establishing peace, harmony and prosperity.”

The association agreement, establishing a Ukraine-EU free-trade zone, was approved in September by the government, which pledged Ukraine would meet required “standards of democracy and human rights.”

PREVIOUS: In conversations with parishioners, pope reveals he once was a bouncer

NEXT: Pope Francis will help launch worldwide prayers against hunger