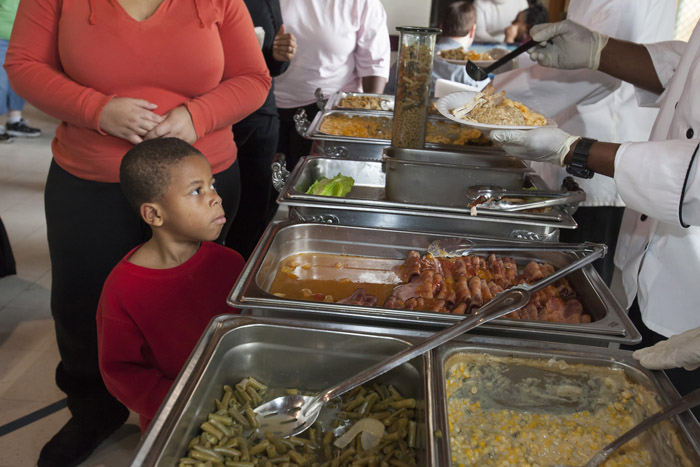 A boy looks on as meals are served to residents of a Salvation Army shelter for homeless women and children in early January in Detroit. There are 46.5 million people living in poverty in the United States. About one third are children under 18. (CNS photo/Jim West)

Organized by Caritas Internationalis, the Vatican-based federation of Catholic charities, the global “wave of prayer” will begin at noon Dec. 10 on the South Pacific island of Samoa and head west across the world’s time zones.

Pope Francis will offer his blessing and support for the “One Human Family, Food For All” campaign in a five-minute video message being released on the eve of the global launch.

Caritas Internationalis invited its 164 member organizations and local churches to pray for an end to hunger and malnutrition as well as to act on a local, national or global level against food waste and promote food access and security worldwide.

Nearly 1 billion people — or about one in eight people — experienced chronic hunger or undernourishment during 2010-2012, according to the Caritas website.

“One of the worst sounds a parent can hear is their child crying at night tormented by hunger. Many parents living in poverty hear this cry and yet they have no food to give them,” Honduran Cardinal Oscar Rodriguez Maradiaga of Tegucigalpa, president of Caritas Internationalis, said in a video message.

“There is enough food to feed the planet. We believe that with your help and the help of governments and the U.N. we can end hunger by 2025,” said Honduran Cardinal Oscar Rodriguez Maradiaga.

“There is enough food to feed the planet. We believe that with your help and the help of governments and the U.N. we can end hunger by 2025,” he said.

Caritas is urging Catholics to take a few moments at noon Dec. 10 to join the world in praying against hunger as well as engage in long-term action through raising awareness, advocacy, charitable work or other efforts supporting food security.

The right to food is part of the Universal Declaration of Human Rights and the “Food For All” launch-date of Dec. 10 marks the U.N.’s Human Rights Day.

The Caritas campaign is calling on the United Nations to hold a session on the right to food at its 2015 General Assembly and is asking governments to guarantee the right to food in national legislation to help alleviate their own citizens’ hunger.

The campaign will continue with a “global week of action” in October 2014 with events aimed at pressuring national governments to support laws for the right to food.

In Rome in May 2015, Caritas Internationalis will also host a general assembly of its members’ leaders to focus specifically on eradicating hunger.

People can contact their local Caritas organization for more information or the campaign’s main site at www.food.caritas.org.