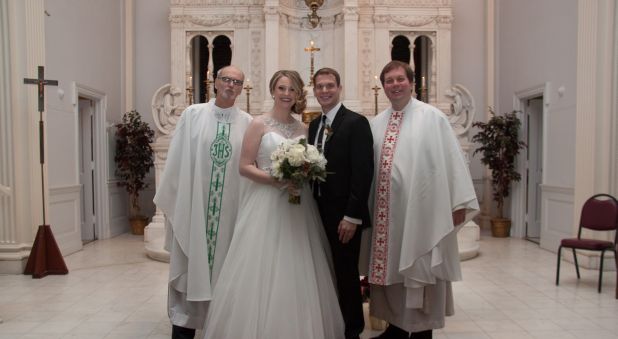 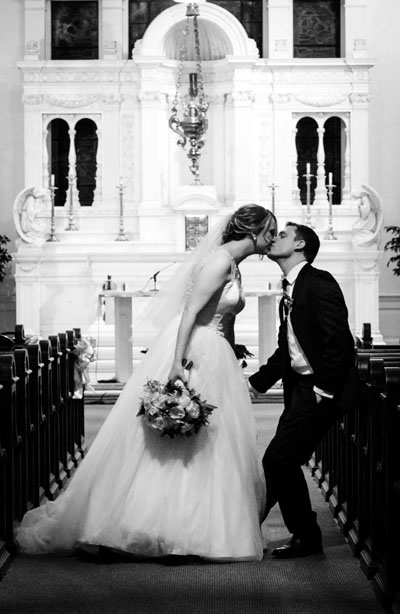 When Devon Fahy and Tommy Germanovich were wed in the chapel at Monsignor Bonner and Archbishop Prendergast High School on Jan. 3, it was the first nuptial ceremony at the grand old chapel in its almost century-old history.

Only last March a new policy issued by Archbishop Charles Chaput granted permission on a case-by-case basis for marriages to be performed in chapels that were not parish churches, with the consent of the pastor of the territorial parish in which it is located. (See the policy here.)

The history of the beautiful chapel where Devon and Tommy chose to marry is unique. It was originally the chapel for St. Vincent’s Orphanage, opened in 1920 as the home for 500 mostly female infants, children and adolescents. In 1953, at a time when large orphanages nationwide were closing, St. Vincent’s relocated at a smaller facility and the building was converted into Archbishop Prendergast High School for Boys.

Three years later, when a large new wing was completed, the boys were moved into it as Monsignor Bonner High School, named for the late Monsignor John J. Bonner who headed the archdiocesan Catholic schools during a golden era of expansion. The now-vacant older wing complete with its chapel was rechristened Archbishop Prendergast High School for Girls.

The two schools, joined at the hip, remained separate entities, although over time became “co-institutional” with a limited number of combined classes. In 2012, after surviving a Blue Ribbon Commission recommendation of closing, the two were wed, as it were, into a single coeducational Catholic high school.

Which brings us to Devon and Tommy. Tommy is a Bonner grad class of 2001 and Devon is a Prendie grad class of 2004, which means they were only in school together for a single year. Actually, at that time there were only a few coeducational classes and neither ever attended mixed classes.

They were both from Glenolden which is not a very large town, but she was from St. Gabriel Parish, Norwood, and he was from Our Lady of Fatima, Secane.

Tommy was very much into theatrics in high school and Devon remembers seeing him in “Bye Bye Birdie.”

“What is strange is Tommy and I had many mutual friends but never at one point saw each other,” Devon recalls. “His younger brother Erik and girlfriend (now wife) Stephanie were two of my very good friends. We went to proms together, and I went to his house every so often, but I don’t remember seeing Tommy.” She did know he was a “Dreamboat” and “every girl in my grade has his name scribbled in hearts on their copybooks.”

Devon too, did acting in high school, although in college she focused more on the production end.

After high school and college, Tommy began to seriously pursue an acting career, in New York, Florida and ultimately Hollywood.

“It’s like a game of Chutes and Ladders,” he said. “One week you are over-the-top, the next week you are down on the bottom, but with each audition my passion grows stronger.”

After a joking reference on Facebook that Devon was planning to visit California (she was not) Tommy called her.

“I only knew her by reputation and as one of my little brother’s friends. I knew she was fun, intelligent, and incredibly beautiful with a breathtaking singing voice,” Tommy said.

Devon was shocked and flattered by the call. “He is so dreamy,” she said. “We had incredible conversations.”

Most of what she knows about him came through those first weeks of conversations. This included his sense of humor – Tommy wore a tux for their first Skype conversation “to make a good impression.”

Devon did visit Tommy and it went so well she took an airline position in order to make more frequent visits, and finally moved to California.

The two came back to Philadelphia for a visit last June at the time Devon thought she was preparing a surprise 30th birthday party for Tommy. He had other plans. With the help of their mothers, Devon was tricked into stopping in at Prendie, where she was offered a tour of the old bell tower. Climbing the ladder to the top she was surprised to hear the strains of Craig Armstrong’s “Glasgow Love Theme” from the film “Love Actually.”

That was her clue this was no ordinary tour. There was Tommy at the top waiting to propose.

They were already aware of Archbishop Chaput’s permit for the celebration of weddings in chapels, and because Monsignor Bonner and Archbishop Prendergast had been so important in their lives, they applied for permission to be wed at the Prendergast Chapel. It was granted.

While Devon and Tommy’s wedding was a first for Bonner-Prendergast, Father Olson expects most weddings will still be performed in local parish churches. As a matter of fact, such weddings must still be registered with the parish where the chapel is located.

While the authorization as issued covers all chapels, oratories and non-parish churches, with certain requirements, it gives most attention to Catholic colleges and universities. From a practical standpoint, in this generation many couples do first meet at college. Up until now, the only local college where student or graduate marriages were performed was Villanova, because St. Thomas of Villanova is actually a parish church.

As for Devon and Tommy, their wedding came off without a hitch in spite of it being held on the day after the biggest snowstorm of the year.

“We wanted a white wedding and that is exactly what we got!” Devon said. “Even so, everything worked out great and even all of our friends from around the country made it to our wedding with no problems. And it was a great surprise to some of our Los Angeles friends who had never seen snow before.” 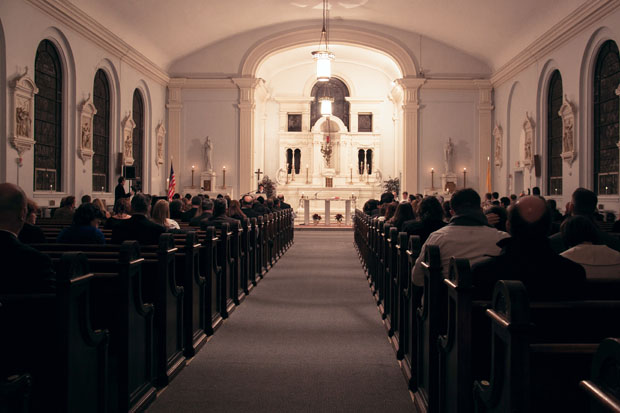 The chapel at Archbishop Prendergast High School hosted a wedding Mass for the first time for the marriage of Devon Fahy and Tommy Germanovich, thanks to a new archdiocesan policy.