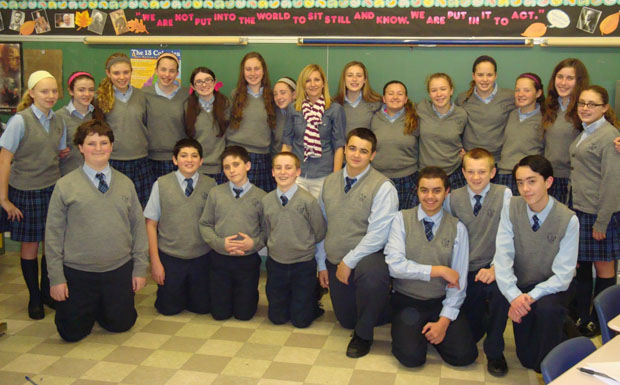 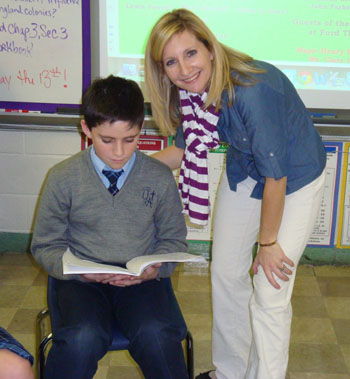 Melissa Feilke poses with one of her students at Queen of Angels Regional Catholic School in Willow Grove, Montgomery County.

Students in Melissa Feilke’s class make music videos on iMovie, take notes on iPads and get tied up in groups to represent WWI alliances. They go on historical scavenger hunts in downtown Philadelphia, create their own President’s Day websites using a free tool called Weebly and communicate with each other in and outside the classroom through the social media site Edmodo.

And because they go to a Catholic school, they pray out loud.

“I never say, ‘I’m going to work;’ I always say, ‘I’m going to school,’” said Feilke, an eighth grade teacher at Queen of Angels School Regional Catholic School in Willow Grove and a winner of this year’s NCEA (National Catholic Educational Association) Distinguished Teacher Award. “It just has a nicer connotation; and I absolutely adore the people I work with!

“I love that my own children, who also attend QOA, learn how to pray and that God is central in their lives — whether it’s in the morning when we say morning prayers, in the evening at dinner before we eat, or before bed, my children — and I know my students as well — are thinking about God and other people,” she said. “And that’s what I love about Catholic school — we are helping to make the next generation more considerate and loving people.”

Feilke received the honor for Region 3, representing Pennsylvania and New Jersey. NCEA gives 12 teacher awards for each region in the United States. She will receive the award at the NCEA annual convention April 22-24 in Pittsburgh.

“Loving, caring, nurturing, creative, and energetic all describe Mrs. Feilke,” said Sister Margaret Rose Adams, I.H.M., principal of QOA and the one who inspired Feilke to apply for the award. “She makes her classes enjoyable, inspiring and captivating, and incorporates strategies that bring the lessons to a greater student understanding.”

Sister Margaret Rose noted Feilke’s keen utilization of technology and her gift as a self-starter, volunteering to run programs as well as initiating them herself.

Student Brigid Toner has Feilke for math, social studies and homeroom. She enjoys the use of a SMART Board instead of the usual textbooks. Toner also likes the chance to be “teacher of the day” in math and enjoys the dramatization of lessons, especially in social studies. Toner appreciates the time Feilke takes to explain concepts, offering help even during recess for students who do not understand a lesson. 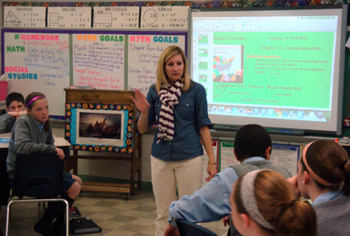 The Constitution of the United States came alive for Toner when she and three other classmates put the document to a current song and added dance moves.

“To this day, when I say the Constitution, I sing that song in my head,” Toner said. “Another reason I liked this project was because she didn’t just ask us to memorize the Constitution, she made learning it fun!”

Erin Morgan was taught by Feilke for three years.

“In Mrs. Feilke’s class, there is never a dull moment,” Morgan said. “She is always prepared and knows how to keep everyone involved during her class period. She gets to know all of her students and tries to help everyone. She goes above and beyond whenever she does something. I am so thankful to have a teacher like her.”

Morgan likes that Feilke encourages her students to bring their own technological devices to class and use Prezi, a presentation website. She also enjoys the freedom to take notes on what she feels is important, and that Feilke incorporates videos, pictures and fun facts into her classes.

Melissa credits her students, her colleagues and her family — husband Ernie and children Mary Kate, 9, Emily, 8, and Ryan, 6 — as her inspiration.

“I love learning new things and they keep me motivated,” Feilke said of her coworkers. 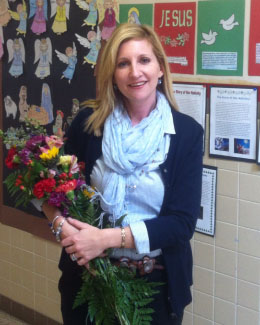 She called her husband, who is also a teacher, “an incredibly supportive partner. I could not do half the things I do without him — whether I am at a conference or on the computer or just doing homework, he never complains. I am very lucky.”

Feilke’s parents were educators as well; her father is a retired principal.

QOA’s first Grandparent’s Day Show last year offered an opportunity for Feilke to pass on the encouragement she received as a child. The event involved Nathaniel Klein, who Feilke called “one of the most unique students I have ever had the pleasure of teaching.”

“He was mature beyond his years, and for an eighth grade boy that is really saying something. Nate was given a special gift — that of music,” she said.

The boy daily asked to bring his guitar to school, but Feilke found it difficult to give him a time to play it, until she remembered that she was planning the school’s Grandparent’s Day Show.

“I wanted it be extraordinary, unique, and something that would bring our school together as one,” she said. “What if I blended the two and Nate brought his guitar in and played with the eighth grade in front of the whole school with a photo montage in the background?”

Klein wanted to play for his class, not the whole school; he was anxious. Yet his class supported him and the whole group sang together as he played guitar, bringing his teacher to tears.

The night before graduation Feilke received an email from Klein’s mom.

“I feel like you helped Nathaniel not only grow as a student, but as a young man,” his mother wrote. “I truly appreciate you giving him a platform from which to share his musical talents. It meant so much to me and my husband that you supported him in this. Music is such an important part of Nathaniel’s life and through you, he was able to share that with others. Thank you.”

“Students like Nate are why I choose to teach in Catholic school,” Feilke said. “If I can encourage kids to pursue their dreams, then I am doing what I am meant to do. I’m hoping Nate thanks me at the Grammys someday.”

Erin Maguire is a freelance writer in Flourtown.

NEXT: Bonner-Prendie grads marry in their old high school chapel