Falling in love with ‘Her,’ when she doesn’t really exist 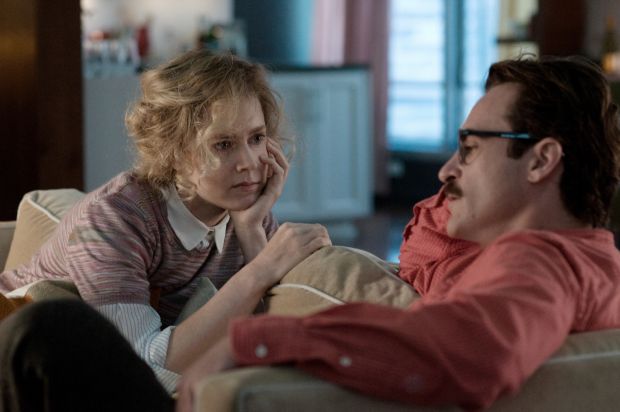 Amy Adams and Joaquin Phoenix star in a scene from the movie "Her." (CNS photo/Warner Bros.)

NEW YORK (CNS) — Many a tech fan, over the years, may have casually declared his love for this or that cutting-edge gadget. But all would have to take a backseat to Theodore Twombly (Joaquin Phoenix), the main character in the quirky romantic drama “Her” (Warner Bros.).

On the rebound from a pending divorce — Rooney Mara plays his soon-to-be-ex, Catherine — depressed Theodore, who lives in a slightly futuristic version of Los Angeles, carries geekiness to a whole new level by falling for an innovative operating system called Samantha (voice of Scarlett Johansson). He does so despite the fact that Samantha has no body other than the casing of whatever computer she’s guiding.

Writer-director Spike Jonze (“Where the Wild Things Are”) leaps over such issues as whether artificial intelligence can ever include emotion — the feelings at work in the central relationship are shown to be mutual — to achieve some moments of poignancy and humor. And his film’s bizarre premise makes it difficult to assess, as a whole, from a real-life moral and spiritual perspective.

But numerous problematic interludes along the way to a fairly acceptable conclusion make this film fit for the sturdiest grown-ups only.

There’s much to sympathize with in Theodore’s lonely plight. By day, he works as a writer for a website that provides its clients with eloquent letters designed to express to their loved ones the affection the customers themselves are unable put into words. By night, he pines for Catherine and broods over their breakup.

What little companionship Theodore enjoys comes from his supportive long-term friend and neighbor Amy (Amy Adams) and, to a lesser extent, from Amy’s somewhat eccentric husband, Charles (Matt Letscher). His isolation makes Theodore’s willingness to give his heart away to a perky collection of software at least marginally more believable.

But corporal considerations remain an issue — both for the characters and the audience. Early scenes, played for laughs, show Theodore’s interest in racy photographs of a pregnant celebrity that are circulating on the Internet as well as his late-night, audio-only encounter with a stranger in a chatroom. Though he’s left frustrated by their get-together, her satisfaction with the outcome of their conversation could hardly be more audible.

It’s not surprising, then, that Samantha, all-observant where Theodore is concerned, worries about her inability to give or receive physical gratification. Yet Theodore seems content — or so, at least, the viewer is left to surmise — to use Samantha’s voice as a stimulant to solitary pleasure.

Eventually, Samantha hits on the plan of introducing a human surrogate — a well-meaning but misguided young woman named Isabella (Portia Doubleday) — to supply the missing carnality to their bond.

All this, of course, is not for the casual movie patron or for those lacking in faith formation. Though more thoughtful than many a Hollywood offering, “Her” requires a thoroughly attentive response from those prepared — and equipped — to withstand its often seamy details.

NEXT: Movie review: The Legend of Hercules