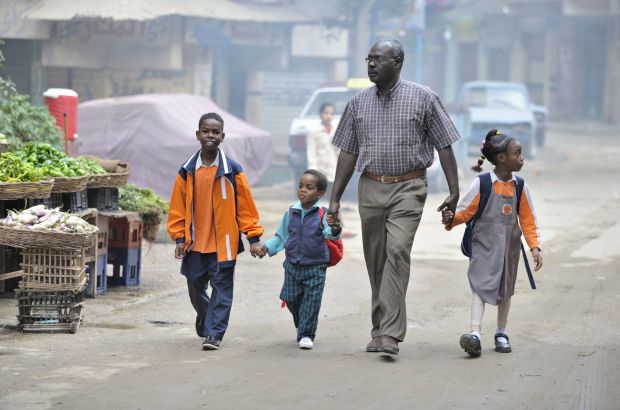 Abdel Karim, a refugee from the Darfur region of Sudan, walks his children to school in early November in Cairo. (CNS photo/Paul Jeffrey)

CAIRO (CNS) — Refugees from South Sudan living in Egypt say the outbreak of violence in their homeland is caused by political squabbles over power, not conflicts between tribes.

“There’s a problem there between the Dinka and the Nuer, because the Dinka are the majority and control the government, leaving the Nuer with no power,” said John Yien Ruach, a Nuer refugee from South Sudan living Cairo. “But here in Egypt the two tribes get along fine. We live together, talk together, and on Christmas day we prayed and celebrated together.”

Yien, an evangelical pastor in Cairo’s refugee community, said he spoke by phone Dec. 31 to his uncle in Malakal, capital of South Sudan’s oil-rich Upper Nile state, which rebels loyal to the country’s ousted vice president, Riek Machar, seized briefly before being driven out by government troops.

“He said that things had calmed down. After two weeks of war, things were now OK. They’re living in the U.N. camp there and want to leave. Yet there’s no way to leave. We’d like them to come here, but that’s too dangerous. People are saying the U.N. wants them to go to Ethiopia to be refugees there,” Yien told Catholic News Service.

More than 1,500 South Sudanese refugees and asylum seekers in Egypt have registered with the U.N. High Commissioner for Refugees. Officials admit many others are living in Egypt but have not registered.

Along with other refugees from Somalia, Ethiopia, Eritrea and Sudan, and a much larger recent influx of refugees from Syria, they fled fighting and hardship at home. There are no formal refugee camps for them in Egypt, however. Like a majority of the more than 15 million refugees in the world, they have moved into crowded urban neighborhoods, often cramming several families into one apartment.

Elizabeth Tan, UNHCR’s deputy regional representative in Cairo, said it is preferable for refugees to live in urban settings where they can maintain their independence, even if they have no formal access to the labor market.

“No one wants to be in a camp where you have to be fed rations on a daily basis, where you don’t have freedom of movement, and where you have no choice about where you live or where your children go to school. That’s the great thing about governments allowing refugees to settle in urban areas,” she told Catholic News Service.

“You never want to have people in a camp setting, no matter how robust the services you provide,” he said. “Ideally you get people living in host communities where they can integrate and live in peace, make new friends, expand their social networks and get on with their lives. It makes service delivery a bit difficult, and you’ve got to go out and find pockets of displaced people in order to deliver services.”

Such urban refugees inevitably face problems, however, when the local population is less than welcoming.

Ochan Jok, a refugee from Malakal whose black skin and ritual scars on his face make him easily distinguishable from most Egyptians, said he is often called “monkey” or “donkey” when he walks down the street in Cairo. His wife, Martha Lual, also from South Sudan, said she regularly gets called a prostitute simply because of her race.

Jok and Lual, who receive a regular cash grant from CRS to cover some of their children’s school costs, have not given up on their homeland, however.

“Someday when my children graduate as doctors and teachers, they can return to South Sudan and help our country develop,” Lual said.

Yet children bear the brunt of mistreatment. Abdel Karim, a refugee from the Darfur region of Sudan, said that when his 9-year-old son Ziad was called racist names by Egyptian boys at their suburban Cairo school, his son refused to fight, instead telling his tormenters that Allah forgave them for their behavior. That earned Ziad even worse treatment, and teachers had to take the boy to the hospital with a cut on his head.

Asked about tension between refugees and Egyptians, Ozar said he could not speak for the refugees.

“You hear things on all sides, both minor issues and more complicated ones. For the most part they are being welcomed, but no integration is seamless,” said Ozar, who coordinates a variety of services that CRS provides to refugees, including educational support and livelihood training.

“There are many challenges, and children can be brats no matter where you go in the world. Whether you’re in suburbs in the U.S. or in government schools in Egypt, kids will take every opportunity to poke fun at others. All that happens here. But are those behaviors unique here? Absolutely not. There are always challenges when new people come into crowded classrooms that are already stretched,” he said. “But my hat’s off to the government of Egypt for doing its best to open the doors and utilize its already stretched resources to serve new populations coming in.”

Yet most refugees from South Sudan say they do not want to stay in Egypt. Tan said the “ultimate dream” of the refugees is to have the United Nations resettle them in a new country.

The UNHCR is currently resettling about 2,000 sub-Saharan refugees from Egypt to other countries every year. Most go to Canada, the United States, Finland, Sweden, the United Kingdom and Australia.

Yet, South Sudanese have not been eligible for resettlement for several years, as resettlement countries felt that repatriation to their newly independent country was more suitable. With the outbreak of violence in December, that perspective may soon change.

“We hope they’ll change their mind because of what is happening now in South Sudan,” said Yien. “No one wants to go home. Those of us who are here want to be resettled somewhere else.”

NEXT: Pope tells Jesuits to dream big, change the world