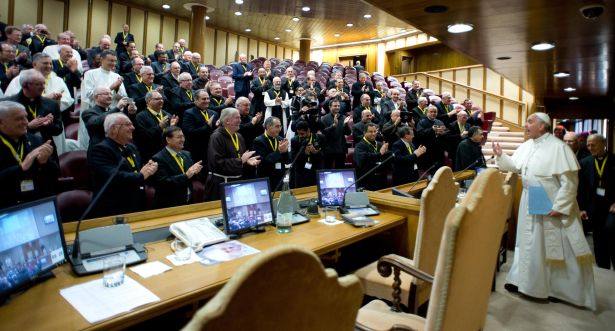 Pope Francis gestures as he arrives for a meeting with superiors of men's religious orders at the Vatican Nov. 29. the revision of norms on the relations between religious orders and local bishops. (CNS photo/L'Osservatore Romano)

VATICAN CITY (CNS) — Pope Francis said he has ordered a revision of what he called outdated Vatican norms on the relations between religious orders and local bishops, in order to promote greater appreciation of the orders’ distinctive missions.

The pope’s words were published Jan. 3 in the Italian Jesuit magazine La Civilta Cattolica. He made the comments Nov. 29 at a closed-door meeting with 120 superiors general of religious orders from around the world.

Pope Francis referred to “Mutuae Relationes,” a set of directives issued jointly by the Congregation for Bishops and the Congregation for Religious in 1978. The document said that religious orders are part of the local church, though with their own internal organization, and that their “right to autonomy” should never be considered as independence from the local church.

“That document was useful at the time but is now outdated,” the pope said. “The charisms of the various institutes need to be respected and fostered because they are needed in dioceses.”

The pope, who until his election in March 2013 served as archbishop of Buenos Aires, Argentina, and formerly served as a Jesuit provincial, said he knew “by experience the problems that can arise between a bishop and religious communities.” For example, he said, “If the religious decide one day to withdraw from one of their works due to a lack of manpower, the bishop often finds himself suddenly left with a hot potato in his hand.”

“I also know that the bishops are not always acquainted with the charisms and works of religious,” he said. “We bishops need to understand that consecrated persons are not functionaries but gifts that enrich dioceses.

“The involvement of religious communities in dioceses is important,” the pope said. “Dialogue between the bishop and religious must be rescued so that, due to a lack of understanding of their charisms, bishops do not view religious simply as useful instruments.”

At the Nov. 29 meeting, the pope also asked the heads of the Congregation for Religious to finish a pending document on male religious who are not priests. He acknowledged a “vocational crisis” among such men, but said he believed they still had a role in religious life.

Father Spadaro’s wide-ranging interview with Pope Francis, published in the same magazine in September 2013, included the pope’s controversial statement that the church “cannot insist only on issues related to abortion, gay marriage and the use of contraceptive methods.”

During the meeting with religious superiors, Pope Francis preferred “neither to give a talk nor to listen to their prepared remarks: He wished to have a frank and free conversation consisting of questions and answers,” Father Spadaro wrote.

Noting the growth of religious orders in Africa and Asia, the pope acknowledged challenges to evangelization there, including correct adaptation of Catholic teaching to local cultures, as well as a temptation to exploit poorer societies as sources of vocations.

The pope recalled that Filipino bishops had complained of foreign religious orders running a “novice trade” in their country. “We need to keep our eyes open for such situations,” he told the superiors.

Pope Francis said that sensitivity is needed not only for crossing geographical boundaries but social and cultural frontiers as well.

“The situation in which we live now provides us with new challenges which sometimes are difficult for us to understand,” he said, noting that Catholic teachers must be prepared to “welcome children in an educational context, little boys and girls, young adults who live in complex situations, especially family ones.”

The pope offered an example of such a situation from his experience in Buenos Aires: “I remember the case of a very sad little girl who finally confided to her teacher the reason for her state of mind: ‘my mother’s girlfriend doesn’t like me.'”

Seminary directors, too, must be sensitive to the needs of religious novices, encouraging them to engage in sincere and fearless dialogue with their instructors, he said.

“Formation is a work of art, not a police action,” the pope said. “We must form their hearts. Otherwise we are creating little monsters. And then these little monsters mold the People of God. This really gives me goose bumps.”

“Just think of religious who have hearts that are as sour as vinegar: They are not made for the people,” the pope said. “In the end we must not form administrators, managers, but fathers, brothers, traveling companions.”

Pope Francis praised efforts by Pope Benedict to stop sex abuse of minors by clergy and religious and stressed the importance of vetting candidates for religious orders, in order to weed out those with incorrigible failings.

“We are all sinners, but we are not all corrupt,” the pope said. “Sinners are accepted, but not people who are corrupt.”