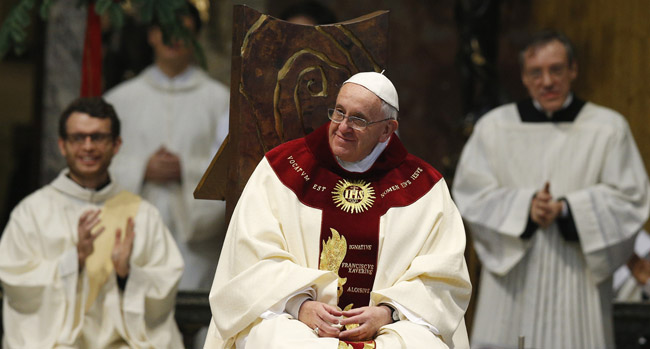 Pope Francis smiles during Mass at the Church of the Gesu in Rome Jan. 3. The Mass was celebrated on the feast of the Most Holy Name of Jesus in thanksgiving for the recent canonization of Jesuit priest St. Peter Faber. (CNS photo/Paul Haring) 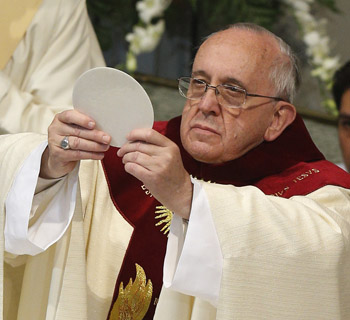 Pope Francis celebrates Mass with 300 of his Jesuit confreres at the Church of the Gesu in Rome Jan. 3. (CNS photo/Paul Haring)

VATICAN CITY (CNS) — True faith is marked by the daring desire to change the world with the loving heart of Jesus, Pope Francis said.

The zealous proclamation of the Gospel must never be coupled with “inquisitional clobbering, with condemnation. No, the Gospel is proclaimed with kindness, fraternity and love,” he told more than 300 of his fellow Jesuits Jan. 3.

The pope celebrated the feast of the Most Holy Name of Jesus at the Church of the Gesu, the Jesuits’ main church in Rome. It was the first Jesuit pope’s third visit as pontiff to the church where St. Ignatius of Loyola and other Jesuit leaders are buried.

The Mass was also a celebration of thanksgiving for the recent canonization of St. Peter Faber, who, with St. Ignatius and St. Francis Xavier, was a founding member of the Society of Jesus and the first of the Jesuits to be ordained a priest.

In his homily, Pope Francis said that one of things that stood out with St. Faber was his desire to “empty himself” and let Christ fill his heart and life.

The 16th-century priest possessed a restlessness for God, an understanding of his dreams and desires, and the ability to act with determination, the pope said.

“An authentic faith always entails a deep desire to change the world. Do we, too, have a great vision and impulse? Are we audacious? Does our dream soar high? Or are we mediocre and we content ourselves with our laboratory of apostolic programs?”

“An authentic faith always entails a deep desire to change the world. This is the question we must ask ourselves: Do we, too, have a great vision and impulse? Are we audacious? Does our dream soar high? Does our zeal consume us?” the pope asked.

“Or are we mediocre and we content ourselves with our laboratory of apostolic programs?”

Instead, people need to remember “the strength of the church does not reside in itself and its organizational abilities, but hides in the deep waters of God,” the pope said.

These “deep waters stir up our desires and these yearnings widen the heart,” he said, citing St. Augustine, who saw prayer as a way to fuel the desire to widen one’s heart to God.

St. “Faber was consumed by the intense desire to convey the Lord” to others and “if we don’t have the same yearning, then we need to stop and pray and, with silent fervor, ask the Lord for the intercession of our brother Peter (the apostle) to return to fascinate us — that appeal of the Lord that led Peter to all that apostolic madness.”

Only with Christ at the center of one’s life can people go to the ends of the earth for God, he said.

The Jesuits must be willing to empty themselves and feel, think, love, see and walk like Christ, the pope said.

“This means doing what he did with the same feelings of his heart,” he said.

The Society of Jesus must be centered on Christ and his church and on always being open and searching the horizon for “God who always surprises us.”

“If the God of surprises is not at the heart, the Society gets disoriented.”

Though he did not mention it in his homily, 2014 marks the 200th anniversary of the restoration of the Society of Jesus by Pope Pius VII after it had been suppressed for 41 years starting in 1773 by Pope Clement XIV.

To avoid losing his way, the pope said, a Jesuit must be “a person whose thinking is incomplete, whose thinking is open, so that he always thinks looking at the horizon that is the always greater glory of God who endlessly surprises us,” he said.

At the end of the Mass, Father Adolfo Nicolas, superior general of the Jesuits worldwide, thanked the pope for celebrating Mass with them and for the canonization of St. Faber, saying “each time a Jesuit becomes a saint is an opportunity for all of us to deepen our vocation.”

Father Nicolas also recalled the joy he felt when Pope Francis called him immediately to say “I just signed the decree” declaring Faber a saint.

The decree, signed on the pope’s birthday, Dec. 17, was an “equivalent canonization,” in which the pope inserts the name of the new saint in the universal calendar of saints without verifying a miracle performed through his intercession and without holding a formal canonization ceremony.