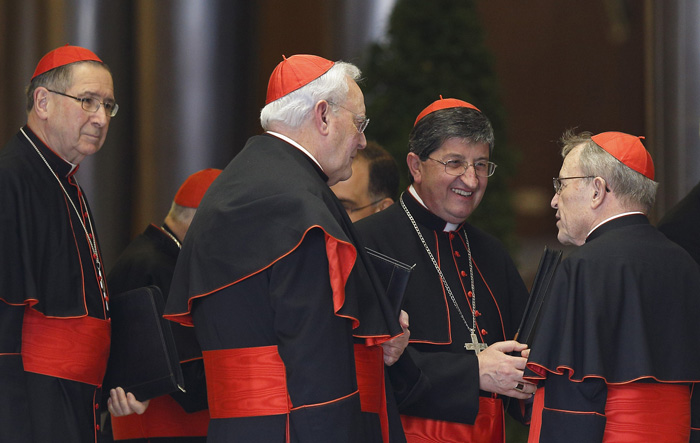 Pope Francis arrives for the afternoon session of a meeting of cardinals in the synod hall at the Vatican Feb. 21. (CNS photo/Paul Haring)

VATICAN CITY (CNS) — In late February, for the first time since his election nearly a year earlier, Pope Francis gathered the world’s cardinals at Vatican. The principal reason was to add 19 to their number at a ceremony called a consistory, scheduled for Feb. 22 in St. Peter’s Basilica.

The most important function of the College of Cardinals is to elect a pope, but the college is also an advisory body, traditionally known as the “pope’s senate.” So Pope Francis took the opportunity of the cardinals’ presence in Rome to summon them to working meetings on some of his most urgent priorities.

At an extraordinary consistory Feb. 20-21, about 150 cardinals met to discuss church teaching and practices in regard to the family, in preparation for two synods of bishops that the pope has called to discuss the subject, in October and sometime in 2015.

Earlier the same week, the eight-member Council of Cardinals, which Pope Francis named last year to advise him on reform of the Vatican bureaucracy and governance of the universal church, met for its third session, which focused on the Vatican’s financial management and the Vatican bank.

The panel also met with the 15-member Council of Cardinals for the Study of the Organizational and Economic Problems of the Holy See, which oversees budget-making for the Holy See and Vatican City State, and which was scheduled to hold its own meeting Feb. 24-25.

The array of issues on the cardinals’ agenda this February thus spanned a wide range of Pope Francis’ responsibilities as leader of the universal church. At first glance, the quality of the Vatican’s financial accounting has little to do with the question of whether divorced and civilly remarried Catholics may receive Communion, except that the pope happens to be in charge of both.

Yet, the variety of matters Pope Francis asked his cardinals to address in this period are all objects of a common concern, one the pope has made clear he regards as overriding.

In his apostolic exhortation “Evangelii Gaudium,” published in November, the pope deplored a range of problems impeding efforts to make the church “more mission-oriented, to make ordinary pastoral activity on every level more inclusive and open, and to inspire in pastoral workers a constant desire to go forth and in this way to elicit a positive response from all those whom Jesus summons to friendship with him.”

The cardinals’ recent efforts focused on eliminating just such impediments.

It is easy to see how unedifying revelations or suspicions about the Vatican’s handling of money can undermine evangelization, particularly the ministry to the poor on which Pope Francis has laid such emphasis.

Yet the pope has argued that the preaching of virtue, no less than the practice of vice, can prove a barrier to belief, if certain isolated questions are overemphasized to the detriment of the Gospel message.

“We cannot insist only on issues related to abortion, gay marriage and the use of contraceptive methods,” the pope said in a much-quoted 2013 interview. “It is not necessary to talk about these issues all the time.

“The dogmatic and moral teachings of the church are not all equivalent,” he added. “The church’s pastoral ministry cannot be obsessed with the transmission of a disjointed multitude of doctrines to be imposed insistently.

“Proclamation in a missionary style focuses on the essentials, on the necessary things,” he said. “We have to find a new balance; otherwise even the moral edifice of the church is likely to fall like a house of cards, losing the freshness and fragrance of the Gospel.”

It may seem ironic that no one in the church has done more lately to promote talk about sexual and medical ethics than Pope Francis himself, as part of his focus on pastoral care of the family.

In addition to calling three international meetings of church leaders on the subject, he has authorized distribution of a pre-synodal questionnaire that has stimulated heated debate and discussion about contraception, cohabitation and same-sex unions among lay Catholics in dioceses around the world.

Yet, these actions are consistent with the pope’s stated aims and principles. As he added in a less-quoted passage of the same interview, “when we speak about these issues, we have to talk about them in a context.” The upcoming synods, like the extraordinary consistory just ended, are evidently meant to provide such a context for that talk.

NEXT: Pope tells cardinals they are servants, not courtiers