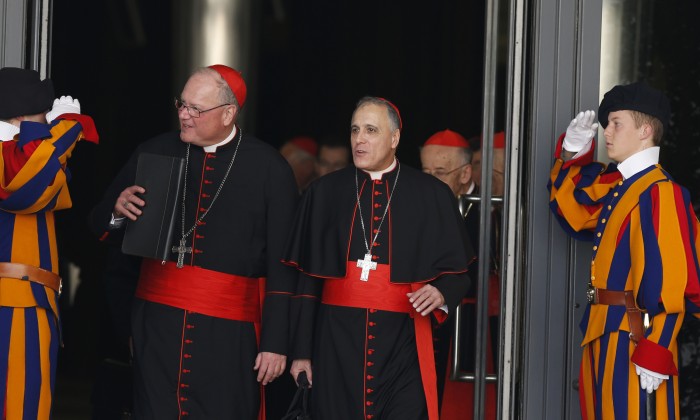 Swiss Guards salute as Cardinals Timothy M. Dolan of New York and Daniel N. DiNardo of Galveston-Houston leave a meeting of cardinals with Pope Francis in the synod hall at the Vatican Feb. 21. (CNS photo/Paul Haring) 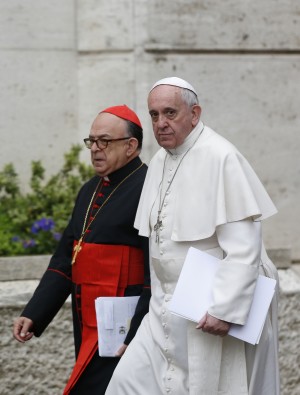 Pope Francis and Cardinal Raymundo Damasceno Assis of Aparecida, Brazil, walk to a meeting of cardinals in the synod hall at the Vatican Feb. 20. (CNS photo/Paul Haring)

VATICAN CITY (CNS) — As some 150 cardinals from around the world gathered with Pope Francis to talk about the family, their two days of discussion focused particularly on three points: the Christian vision of people and family life; essential pastoral programs to support families; and ministry to divorced and civilly remarried Catholics.

Although the discussions during the Feb. 20-21 meeting were closed to the press, Jesuit Father Federico Lombardi, Vatican spokesman, gave reporters an overview of the discussions.

Retired German Cardinal Walter Kasper gave a two-hour opening presentation, laying out the biblical and theological basis of church teaching on marriage. He also emphasized the challenge of finding ways to always fulfill two basic obligations: remaining faithful to Jesus’ words about the indissolubility of marriage and embodying the mercy God always shows to those who have sinned or fallen short.

The cardinals held two morning and two afternoon sessions. In the first three sessions, Father Lombardi said, 43 cardinals spoke; many others had signed up to speak the final afternoon or had decided to make their contributions in writing.

Father Lombardi said many of the cardinals spoke broadly about Christian anthropology — the biblically based vision of people — and the challenge of living that out in the “context of a secularized society that promotes visions of the human person, the family and sexuality that are very different.”

“The climate wasn’t one of complaining, but of realism,” the spokesman said.

The second focus, he said, was on the kinds of pastoral programs offered to families and the forms of support available to them in parishes and dioceses. Several cardinals insisted on the importance of mandatory marriage preparation programs.

A third group of talks, Father Lombardi said, focused on divorced and civilly remarried Catholics. Several cardinals spoke about the church’s process for granting annulments and possible ideas for improving the process or simplifying it.

Other cardinals, he said, spoke about the desire of some divorced and civilly remarried Catholics to be able to receive Communion even though they have not received an annulment.

“The discussion was very interesting, very broad, very serene,” he said. “No decisions were made,” but there was “a clear commitment to finding the best way to keep together fidelity to Christ’s words and mercy in the life of the church.”

Father Lombardi said the atmosphere in the synod hall, where the pope and cardinals were meeting, wasn’t one of “tension or anxiety in talking about these themes, but very much a climate of discernment, wisdom and of seeking together the best path for the church to take.”

The cardinals were not expected to make any decisions or vote on proposals during their meeting, he said. Rather, they were holding a discussion in preparation for October’s extraordinary synod on the family and a 2015 world Synod of Bishops on the same theme.

South African Cardinal Wilfred F. Napier of Durban told Catholic News Service he expected continental and regional differences to come into sharper focus at the extraordinary synod in October. Questions regarding the reality and pastoral approach to polygamy and arranged marriages, for example, are likely to be a frequent topic at the synod.

The cardinals’ meeting Feb. 20-21 was “absolutely wonderful, absolutely helpful” because it was more general and theological, he said.

The focus on maintaining church teaching, both about the indissolubility of marriage and about God’s abundant mercy, impacted the conversation, he said, by helping cardinals avoid falling into a position of trying to find solutions by advocating for “doing away with the law, doing away with the structures.”

While the bishops of Africa and in many parts of Asia are not feeling such pressure today to reach out to divorced and civilly remarried Catholics, he said, “what is a problem in Europe and North America today in two years time will be a major problem for us, because issues are being exported that quickly.”