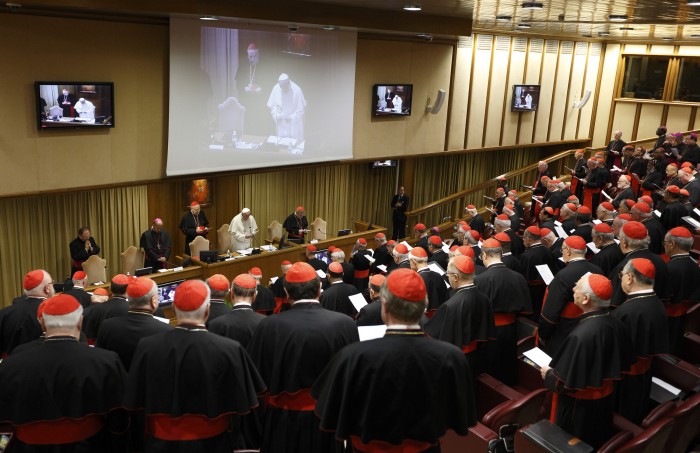 The pope leads a meeting of the world's cardinals and those about to be made cardinals at the Vatican Feb. 20-21 to discuss the church's pastoral approach to the family. (CNS photo/Paul Haring) 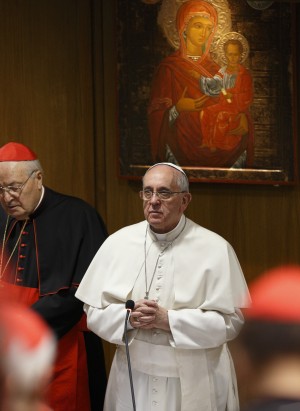 Pope Francis leads the opening prayer during a meeting of cardinals in the synod hall at the Vatican Feb. 20. (CNS photo/Paul Haring)

VATICAN CITY (CNS) — Opening a two-day meeting of the world’s cardinals, Pope Francis said the church’s pastoral approach to helping couples must be “intelligent, courageous and full of love” because the family today is “looked down upon and mistreated.”

“Our reflection must keep before us the beauty of the family and marriage, the greatness of this human reality, which is so simple, yet so rich, made up of joys and hopes, of struggles and sufferings,” the pope told the cardinals Feb. 20 as they began meeting in the Vatican synod hall.

Pope Francis arrived in the synod hall before many of the approximately 150 cardinals and cardinals-designate in attendance. He stood in the narrow entryway, greeting those who arrived after him, while the others renewed old friendships, met the new cardinals or sat quietly praying or reading.

After a prayer service, led by the Sistine Chapel choir, Pope Francis thanked the cardinals for coming and told them their two days of discussions would focus on the family, “which is the basic cell of human society. From the beginning, the Creator blessed man and woman so that they might be fruitful and multiply,” being a reflection of God, one and triune, in the world.

The cardinals should try to avoid “falling into casuistry,” the pope said, and instead attempt “to deepen the theology of the family and discern the pastoral practices, which our present situation requires.”

Jesuit Father Federico Lombardi, Vatican spokesman, said his understanding of the pope’s warning about “casuistry” was that it was a plea to “avoid a fragmentation of the discussion by focusing on too many particular cases” and never getting to the point of discerning a general approach that should guide the church’s pastoral activity. “I think he is saying that our discussion should not be too fragmented by listing specifically difficult situations or cases that have touched us.”

While many in the world today look down on and even mistreat the family, Pope Francis said, the church must help people recognize “how beautiful, true and good it is to start a family,” and must find better ways to help Catholic couples live God’s “magnificent plan for the family.”

The cardinals’ two-day discussion with Pope Francis was introduced by retired German Cardinal Walter Kasper, a theologian who has written a book Pope Francis admired on mercy as one of the most basic traits of God and as the key to living a Christian life, both individually and as the church.

In the early 1990s, while he was a diocesan bishop, he and two other German bishops tried to institute a policy that in certain circumstances would allow divorced and civilly remarried couples to return to the sacraments even without an annulment. The Vatican Congregation for the Doctrine of the Faith forced the bishops to drop the plan.

According to the Vatican spokesman, Cardinal Kasper dedicated one section of his talk to the theme of divorced and civilly remarried Catholics, a topic Father Lombardi said obviously was on the minds of many participants.

The spokesman said Cardinal Kasper treated the topic “broadly,” insisting that the church’s response had to show both “fidelity to the words of Jesus” and an understanding of the “mercy of God in the lives of people and, therefore, in the pastoral work of the church.”

The cardinal’s talk included “many references” to the words of Pope Benedict XVI on the topic, Father Lombardi said, and encouraged the cardinals to look for a path that was neither too strict nor too lenient, with a “penitential path and the sacrament of penance” offering possible solutions for helping the divorced and civilly remarried return to the sacraments.

The Vatican spokesman described Cardinal Kasper’s presentation, which he said the Vatican had no plans to publish, as a broad overview of the theology and reality of the family. It took the cardinal about two hours to read the text, he said.

Father Lombardi said Cardinal Kasper’s talk was an attempt to be realistic about the family today, in the context of its place in God’s plan “for the good of all persons and humanity itself.”

The text also discussed problems the church faces in pastoral work, he said, “but it did not focus exclusively on these problems.”

“We must have a positive point of departure and rediscover and proclaim the Gospel of the family in all its beauty,” Cardinal Kasper said, according to Father Lombardi. “The truth convinces through its beauty, (and) we must contribute with words and actions to making sure that people find happiness in the family and, in that way, they can witness their joy to others.”

Cardinal Kasper said it was essential for the church to develop more fully its teaching that the family is the “domestic church, making it the privileged pathway of the new evangelization and of the renewal of the church.”

The German cardinal also told his confreres that “in families, the church encounters the reality of life; for this reason, families are the proving ground of our pastoral work and an urgent point for the new evangelization. The family is the future, including for the church.”