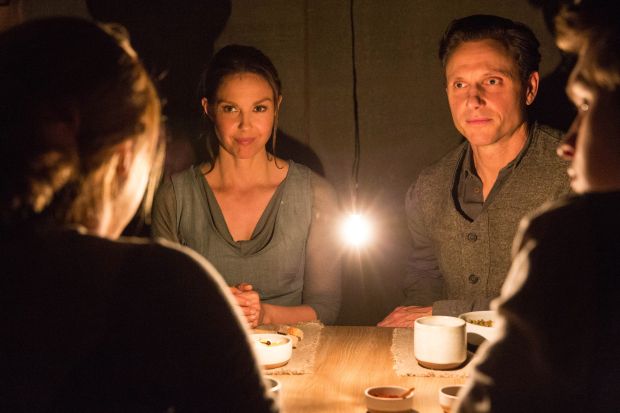 NEW YORK (CNS) — If Hollywood has its way, teenagers won’t have it easy in the post-apocalyptic future.

“The Hunger Games” started the ball rolling, with its vision of a dog-eat-dog world where young people are forced to kill each other to survive.

Now comes “Divergent” (Summit), which, despite its title, is not vastly different from “The Hunger Games.” It, too, features a strong-willed heroine. Torn from her family, she is the chosen one who will redeem a totalitarian society. But first she must become a hardened warrior/killer — and get a tattoo.

Director Neil Burger (“Limitless”) is perhaps too faithful to the eponymous novel by Veronica Roth, juggling a dizzying amount of names, labels, rules and regulations to establish time and place. Underneath all the lavish exposition is a basic good vs. evil story, with a pinch of social commentary and a dash of puppy love.

The setting is Chicago, a century after “the war” which wiped everything out except, happily, the Windy City. To preserve the peace, the “Founders” divided Chicagoans into five factions, each representing a different virtue: Candor (honesty), Amity (peace), Erudite (knowledge), Dauntless (bravery), and Abnegation (selfless).

In this brave new world, Amity members work the farms, Erudites run the schools, Dauntless types man the police force — you get the picture.

“The future belongs to those who know where they belong,” proclaims Jeanine Matthews (Kate Winslet), who oversees the structure. “The system removes the threat of anyone exercising their independent will.”

Or so she thinks. Enter shy wallflower Beatrice Prior (Shailene Woodley). She belongs to Abnegation, where her father, Andrew (Tony Goldwyn), is a government official. Members of this faction reject vanity, embrace goodness and serve others, including the disadvantaged and downtrodden who have been expelled from other groups.

It all sounds rather Christian, although “Divergent” never plays the religion card. Needless to say, Abnegation is looked down upon by the other, more lively tribes.

At age 16, every child must choose his or her fate: whether to stay at home, or join another bloc. Helping to make the decision is an aptitude test akin to a chemical brainwashing.

When Beatrice undergoes the procedure, the results are inconclusive. She is that rare freak of nature, a “Divergent,” able to exist in any faction. Because of their independent nature, Divergents are a threat to the status quo and — so Jeanine commands — must be eliminated.

To protect her family from her secret, Beatrice decides to choose another grouping: Dauntless. She adopts the nickname “Tris” and struggles to fit in with a considerably hipper, angst-ridden crowd.

What ensues is a prolonged and increasingly vicious training and initiation ritual, led by a hunky instructor named Four (Theo James).

(Regrettably, chivalry has not survived the apocalypse, as boys have no qualms about beating girls to a pulp.)

Before long, Tris and Four are an item, with a lot more in common than their tattoos. Happily, their courtship is a chaste one, with Tris telling Four she prefers to “take it slow.”

Besides, there are bigger fish to fry. Together they uncover a nefarious takeover plot by Jeanine that puts the survival of Abnegation — and Tris’ family — in jeopardy.

As it barrels towards an explosive climax, “Divergent” pushes the boundaries of mayhem to the limit, placing the picture squarely outside the proper reach of younger teens.

The film contains intense violence, including scenes of torture. The Catholic News Service classification is A-III — adults. The Motion Picture Association of America rating is PG-13 — parents strongly cautioned. Some material may be inappropriate for children under 13.

NEXT: Movie review: Muppets Most Wanted