How broken is ‘Sabotage’? Let us number the offenses 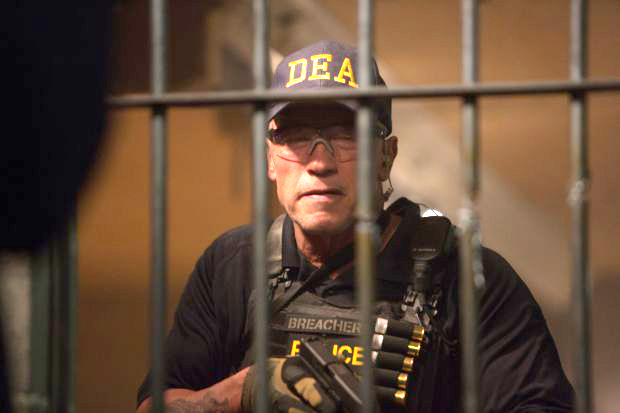 When it’s not showing us the pools of blood or mashed-up body parts left behind by murder victims, Ayer’s film, as penned with Skip Woods, revels in a foul-mouthed machismo that’s almost as repellant as the gore.

Schwarzenegger plays John “Breacher” Wharton, the head of an elite DEA unit made up of skilled but crooked agents — all of whom, like their boss, sport a defining nickname.

The opening scenes take the group inside a drug cartel safe house where they kill everyone in sight, then skim $10 million off the much larger horde of cash on hand, stowing their loot in a sewer pipe. When they go to retrieve their ill-gotten gains, however, the money is missing. Things go further awry when it turns out that the authorities are on to the theft and have launched an investigation of Wharton’s team.

Though this probe peters out, a far worse threat develops when various members of the squad begin to turn up dead, slaughtered in spectacularly brutal ways. As Caroline (Olivia Williams), the straight-arrow local police detective assigned to the case, works diligently to get to the bottom of it all, the remaining operatives wonder whether it’s the cartel they robbed that’s hunting them down or one of their own.

With Caroline the lone exception, greed and vengeance are the dark motives guiding everyone’s behavior within the seamy environment of this sometimes suspenseful but ethically unanchored movie.

Visits to strip clubs and the trading of coarse insults constitute the favored tension-relieving pastimes for Wharton and his crew. Wharton also proves willing to use the seduction of an acquaintance as a tool in advancing his schemes, though the outcome of this — unlike the decadent doings in the pole-clinging establishments the boys frequent — is only implied.

More fundamentally, Ayer and Woods’ script plays a familiar trick by offering us a set of villains so evil that almost any revenge exacted against them will be calculated to yield the audience visceral satisfaction. Though something in the way of a civilizing limit is eventually drawn in this area, at least through the dialogue, to spiritually vigilant viewers it will register as too little too late.

The film contains pervasive bloody, sometimes gruesome violence, including torture and extreme images of gore, graphic sexual activity, some of it aberrant, upper female nudity, drug use, much sexual and scatological as well as brief irreverent humor, several uses of profanity and relentless rough and crude language. The Catholic News Service classification is O — morally offensive. The Motion Picture Association of America rating is R — restricted. Under 17 requires accompanying parent or adult guardian.

NEXT: If you like to eat, you’ll devour these books