Smart, restrained ‘Oculus’ is mirror image of most horror films 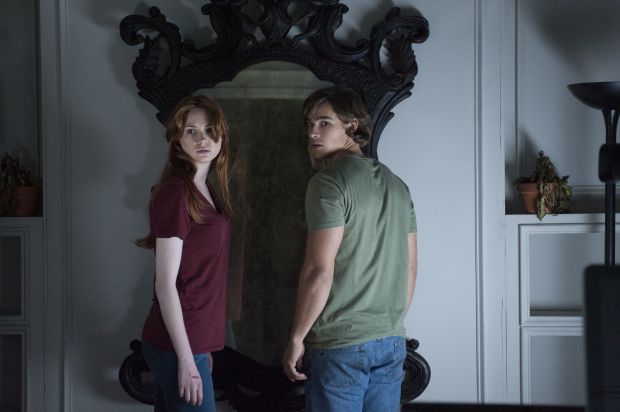 Karen Gillian and Brenton Thwaites star in a scene from the movie "Oculus." (CNS photo/Relativity)

NEW YORK (CNS) — Sure, mirrors can be scary things — especially if you’ve just put on a few pounds.

But the mayhem wreaked by the malevolent haunted looking-glass at the center of director and co-writer Mike Flanagan’s chiller “Oculus” (Relativity) puts such ordinary shivers in the shade.

The good news is that brains trump bloodshed in Flanagan and Jeff Howard’s screenplay, making this generally enjoyable horror exercise acceptable for most mature moviegoers.

A decade after being put away for murdering his father, Alan (Rory Cochrane), troubled youth Tim Russell (Brenton Thwaites) is released from an asylum upon turning 21, based in large part on his recent willingness to accept responsibility for his dad’s death after years of denial. Once free, however, Tim reunites with his sister, Kaylie (Karen Gillan), who has a far different memory of what happened — one that matches Tim’s original, seemingly outlandish, explanation of events.

Both Alan and their mom, Marie (Katee Sackhoff), Kaylie insists, were subject to the accursed influence emanating from an antique mirror Alan had purchased to adorn his home office. Capable of withering plants and sickening the family dog, the glass also could bewilder its human prey, leading to obsessive, destructive behavior and even to fatal violence against loved ones. The casualties of its reign of terror eventually included not only Alan, but Marie as well.

Tim’s release comes at a propitious moment; Kaylie, who works in an auction house, has managed to track the mirror down and gain temporary possession of it. After documenting its supernatural powers on videotape, she intends to destroy it. Somewhat reluctantly, Tim agrees to help.

Suspense builds as Tim wavers between belief in Kaylie’s account and fidelity to the more rational theory he was pressured to accept by his psychiatrist — and as scenes from the present are intercut with unfolding details from the past. (Garrett Ryan plays the youthful Tim and Annalise Basso the young Kaylie.)

The blurring of the line between reality and illusion that the mirror manages to effect sometimes leads to confusion for the audience as well as the characters. And at least some adults may be put off by the sight of young kids being subjected to sustained terror. Still, by comparison to the innumerable fright flicks that substitute the merely repellant for the genuinely scary, “Oculus” is a lesson in restraint.

The film contains considerable gory violence, some of it directed at children, a nongraphic marital bedroom scene, a few uses of profanity, a couple of rough terms and occasional crude language. The Catholic News Service classification is A-III — adults. The Motion Picture Association of America rating is R — restricted. Under 17 requires accompanying parent or adult guardian.

NEXT: Books present correlations between St. Francis and his papal namesake