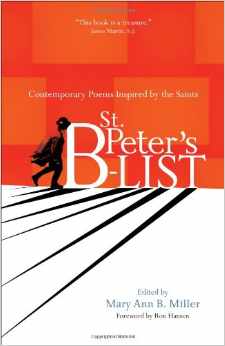 “St. Peter’s B-List,” edited by Mary Ann B. Miller, contains more than a hundred poems, referencing various saints in the context of contemporary spiritual struggle. Honest, touching, sometimes startling, the poets address both the fragmentation and the beauty of ordinary life today.

In his foreword to the book, Ron Hansen describes the Catholic artist as one who, making use of “analogical imagination,” views and represents the world as a metaphor of the Holy One.” Editor Miller agrees, explaining that whether written by practicing Catholics or not, the poems in this collection are expressions of an “incarnative view of art.”

As Flannery O’Connor has written, Catholic artists penetrate “the concrete world in order to find at its depths the image of its source, the image of ultimate reality.” Through the humanity of Christ, in other words, the divine presence manifests itself as human experience.

Many of the poems reveal the mystery and miracles hidden in everyday experience.

Martha Silano’s “Poor Children of Eve” depicts the endless, regular tasks of a mother who prays, “Lead us away from the temptation to chuck it all … and glory be to dishwashing liquid and the sponge … and to the microwave and Mr. Coffee.” Erika Meitner, in “Miracle Blanket” describes the difficulty of putting her infant son to sleep by an allusion to Nicholas of Tolentino, patron saint of babies, who reputedly resurrected 100 dead children, telling those around to “say nothing of this.” When her son finally sleeps the speaker asks the saint, “O faithful and glorious Martyr, say nothing of this” miracle.

“In Praise of Single Mothers” by Kate Daniels shows the difficulty of a mother attempting to write poetry while her children sleep. Interrupted once, she reflects on St. Zita and St. Paula — disciplined, generous women — as well as St. Therese of Lisieux: “finding sainthood and sanity in the daily round of cleaning up and bringing order.” The speaker returns to creative silence: “I lower myself into it as a mother and arise, rinsed into a poet/ baptized back into words.” Her daughter then cries; she leaves the poem to breast-feed her, declaring, “I love her more, much more than poetry.”

St. Catherine, in Brian Doyle’s poem, hears God call her “dearest daughter” in a vision. As a father, the speaker answers unbelievers’ jibes of “what’s with the whole guy/on the cross thing?” by telling them “he’s a dad./His children drive him nuts and he would die for them without hesitation.”

A parental reversion happens in Susana Rich’s poem about watching over her mother in the intensive care unit when she prays, “O Jude, Patron of the Impossible,/Man of the Last Moment–/come, sit with me. I have become my mother’s mother.”

Other poems deal with the realities of doubt and disbelief. Rich’s poem on attending Mass on the anniversary of her father’s death shows how she “betrays him now by playing/at belief in the church that he loved.” Lorraine Healy in “St. Rita” writes “my mother carries the invisible cross of her depression to yet another church.” “The American Cathedral” by Alan Berecka reflects upon an idealist priest who converted from Catholicism to capitalism and now preaches through Sunday advertisements that “problems can be solved by shopping in the city of Corpus Christi.”

The title of the book reflects the last poem, which questions the pre-Second Vatican Council dualism underlying the belief that ordinary people with imperfections can only be second-class saints. The collection as a whole belies this idea, revealing the divine spark alive and well in the diversity of human experience.

Also of interest: “A Maryknoll Book of Poetry: Beauty, Truth and Goodness from Around the World,” edited by Michael Leach, Doris Goodnough and Helen Phillips. Orbis Books (Maryknoll, N.Y., 2014). 149 pp., $20.