At Easter, Mideast patriarchs call for peace, especially in Syria 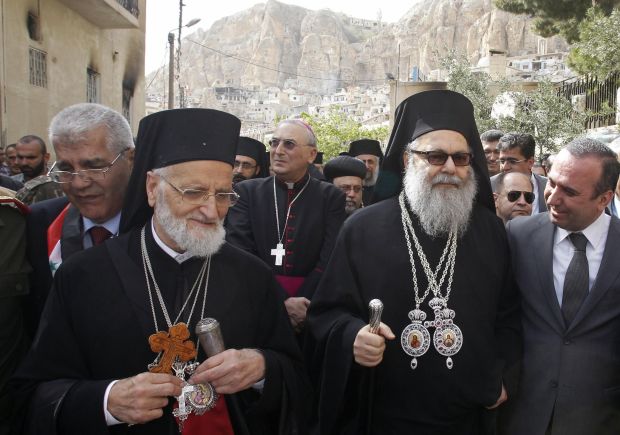 BEIRUT (CNS) — Catholic patriarchs in the Middle East, in their Easter messages, appealed for peace in Syria and expressed hope that the region would experience a resurrection.

Melkite Catholic Patriarch Gregoire III Laham, who was born in Syria, said his country has “entered upon the fourth year of its way of the cross” but “will one day soon, we hope, reach resurrection joy.”

“I want Damascus and the whole of Syria to live again the joy of (St.) Paul when he met Christ, risen from the dead, at the gate of Damascus,” the patriarch said in his Easter message, issued ahead of the April 20 feast.

On Easter, he visited the ancient city of Maaloula, Syria, with Orthodox Patriarch John X of Antioch and all the East.

He appealed to the world “in the name of the poor, weak, widows, victims, mortally wounded, mutilated, disfigured, displaced persons, refugees, homeless, hungry, children, the elderly, pregnant women, handicapped, all those in despair, pain and discouragement — such as I often encounter at the Syrian-Lebanese border when travelling from Beirut to Damascus, or during my visits to families of victims and disaster-stricken people. They are burdened by fear about the future and the fate of their families, children and young people.

“In the face of this dark and bloody image of our beloved country, Syria, I turn to the nations of the whole world and beseech them: Have pity on Syria! Leave Syria to Syrians! That’s enough of your weapons, your fighters, your mercenaries, your armed adventurers, your jihadis …”

“Love will rebuild Syria, which will be thereby renewed. That is what Jesus teaches us in his Gospel,” he said.

Syriac Patriarch Ignace Joseph III Younan, who also was born in Syria, said, “Christian communities in the Middle East are facing today the most fearful challenge, which threatens their very survival in their own land.”

“Innocent people, particularly vulnerable and targeted Christians, continue to suffer in the Middle East and most particularly in Syria and Iraq. They are suffering because of violent hatred exercised by many militant religious groups that are often tacitly even openly supported by Western politicians,” Patriarch Younan said in his Easter message.

“Hundreds of thousands among Christians have been targeted and forced into exile inside their own country or had no other choice than to emigrate. Many among them are clergy members and faithful who have been abused, kidnapped or killed because they represent a minority still believing in the Gospel of love, justice and peace,” the patriarch said.

He said the violence would not have happened without people looking for economic opportunism.

“Let us hope that one day, with the prayers, courage and effective solidarity of the silent majority of our Christian brothers and sisters in the Western world, peoples of the Middle East (will) rediscover their true calling to spread God’s love and reconciliation for a better world,” he said.

The patriarchs and heads of Christian churches in Jerusalem said they were “acutely conscious of the ravages of violence in places such as Syria, Lebanon and elsewhere, as well as of the struggles of countless thousands of refugees who have been displaced from their homes.” They expressed thanks for all the church and church-related groups providing support and said Christ’s resurrection “was the ultimate assurance that transformation by the grace of God is always possible, even in the apparently most intractable of human situations.”

They also called for prayers for peace in the Holy Land, noting, “A peace which does not seek to abolish discrimination between different communities is no peace at all.”

Lebanese Cardinal Bechara Rai, Maronite patriarch, appealed for an end to the cycle of violence and for issues to be resolved “through dialogue, understanding and negotiation.” He offered prayers for people in “Syria, Iraq, Egypt, Palestine and the Holy Land, and in other countries near and far.”

“And with them and with the people of these countries we hold dear, we raise our prayers to God for the innocent victims and the wounded, and for the families affected and displaced and homeless at home or abroad,” the cardinal stated in his message.

The cardinal called upon the international community “to put an end to the tragedy of Syria on the basis of truth and justice” and to stop supporting and fueling the conflict with money, weapons and support, “for private, political and economic gain.”

“We ask Christ the victor over sin and evil and death” to touch the consciences of those responsible, “and stir in their hearts love and compassion,” he said.

Chaldean Patriarch Louis Sako said in his Easter message that “despite the worrying situation that we are currently experiencing in Iraq and the challenges facing our brothers and sisters in the diaspora,” the resurrection of Christ “makes the sun rise upon us, the people of Iraq, and all humanity.”

PREVIOUS: Jesus wants everyone to serve others with love, pope says

NEXT: Share Easter’s ‘unconditional, faithful love’ with others, pope says