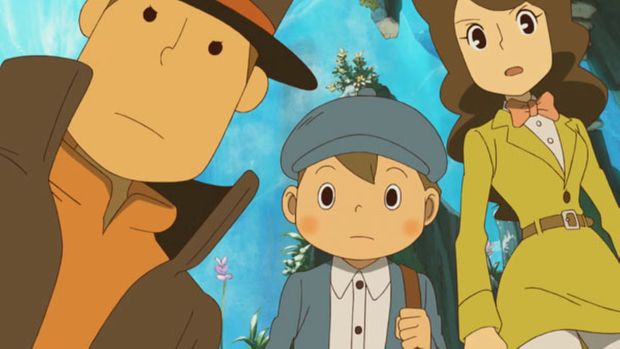 This is an image from the video game "Professor Layton and the Azran Legacy"(Level-5). (CNS photo/Layton Images)

NEW YORK (CNS) — For Catholics who are interested in the gaming world, yet confused about the different consoles on the market, a good name to know is Nintendo. Nintendo is far and away the most family-friendly gaming system available.

The company is the home of classics like “Super Mario,” “Tetris” and “Donkey Kong” — games with a high quotient of fun and eye-catching animation that are also free of graphic sex and violence.

The same can be said for the “Professor Layton” franchise. This massively popular series of animated puzzle and adventure games from Level-5 can be played on the Nintendo handheld 2DS and 3DS systems.

The titular character, Professor Hershel Layton, is a well-spoken and gentlemanly British archaeologist and mystery-solver who dresses in a suit and brown stovepipe hat. A boy named Luke Triton is Layton’s sidekick.

In the newest game, “Professor Layton and the Azran Legacy” (Level-5), Layton sets off on an airship, “Bostonius,” to find the secret of the Azran. This ancient civilization left artifacts that supposedly possess supernatural powers — including a “living mummy.”

Professor Layton, Luke and their friend Emmy travel to the country of Froenberg to investigate the living mummy. Players are also on the case.

They scan the towns and countryside for clues and have to solve puzzles in order to move on to the next step. The brainteasers are various: arithmetic, spatial reasoning, and logical skills are all put to the test.

The animation is top-notch, with hand-drawn backdrops.

Not only is there nothing morally objectionable in the game, its protagonist is an upstanding role model. He is polite, erudite and a good mentor to young Luke. Along with Luke, players are encouraged to use their noggins, including deducing the most obvious solution to a puzzle (e.g., ice melts when near fire). There is only mild violence and no sexual content.

The dialogue is also intelligent and occasionally witty. Caught out in the cold without a coat, a character with a towering hairdo refers to himself as “a bouffant stalagmite.”

As “Professor Layton and the Azran Legacy” develops, the plot gets complex. There are twists, switchbacks and surprise revelations, including a final denouement that lasts more than 30 minutes.

This isn’t indulgence as much as a way for Akihiro Hino, Professor Layton’s creator, to give gamers good value for the money they spend on “Azran.” Video games can, of course, go on for hours or days, and the estimated play time to complete the new “Professor Layton” title is 25 hours.

As it turns out, puzzles aren’t the only barrier to discovering the true nature of the living mummy. Layton and Luke also have to confront an organization named Targent, which has taken an interest in the mummy. Targent’s rival, a man named Jean Descole, becomes their adversary as well.

It would not be right to reveal the final surprise. But gamers can rest assured that it dovetails nicely with church teaching.

The Catholic News Service Classification is A-I — general patronage. The Entertainment Software Rating Board rating is E — everyone.

PREVIOUS: ‘Oz,’ the sequel: Nice movie; not memorable, but nice