Families tell pope their concerns during lunch in Bethlehem 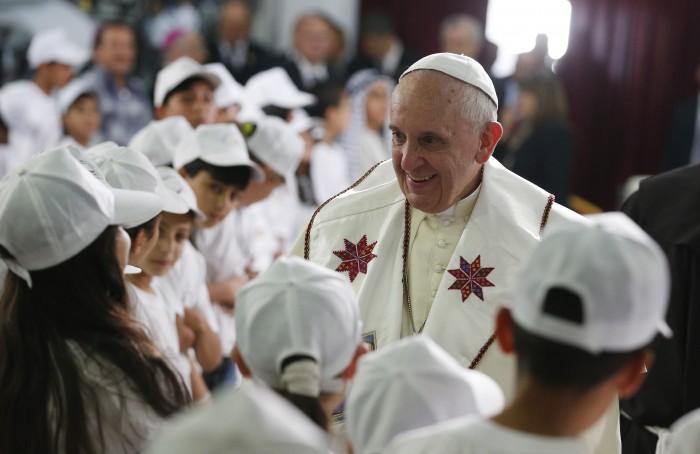 Pope Francis greets children from the refugee camps of Dehiyshe, Aida and Beit Jibrin at the Phoenix Center of the Dehiyshe Refugee Camp near Bethlehem, West Bank, May 25. (CNS photo/Paul Haring)

BETHLEHEM, West Bank (CNS) — When Elias Abu Mohor entered the Casa Nova convent for lunch with Pope Francis, he was surprised to realize he would be sitting at the same table with the pontiff.

Abu Mohor, 44, and his wife Juliet Bannoura, 36, of the neighboring village of Beit Jalla, were among families chosen to eat with the pope after the Mass in Bethlehem May 25. The five — including one Muslim family — represented urgent issues facing the Palestinian community, including land confiscation, imprisonment, displacement from their homes and the situation of people trapped by the embargo of the Gaza Strip.

Abu Mohor told Catholic News Service the first day he was informed his family had been chosen he was in disbelief, but he said he used the opportunity to present Pope Francis with a map showing the encroachment of lands by Israel.

Speaking to the pope is Spanish, he expressed the concerns of families in the Cremisan Valley, where Israel has confiscated land for its separation barrier, sometimes splitting people’s property.

Each of the families chosen told the pope about issues they faced. Most spoke in Arabic, with their concerns translated into Spanish.

Shadia Sbait, 42, who works in the field of banking, and her husband George, 50, a martial arts instructor, traveled from the northern Galilee village of Kafar Yassif. They and their children Nicole, 15, and Caesar, 13, represented the families of Ikrit and Biram.

In the late 1940s, after the creation of the Jewish state, residents of the two Catholic Arab villages were displaced with the promises that they would be permitted to return after two weeks. That never happened, and descendants of the residents, who now live in various villages and cities in northern Israel, have peacefully pursued legal recourses to be permitted to return.

Before the meeting, Shadia Sbait said she would ask Pope Francis to bring up their concerns when he met the following day with Israeli Prime Minister Benjamin Netanyahu.

“I am not a very religious person but I believe in miracles — and the power of the personality of the pope,” she said.

NEXT: Ukrainian Catholic bishop: Election was ‘fruit of the revolution’