Ukrainian Catholic bishop: Election was ‘fruit of the revolution’ 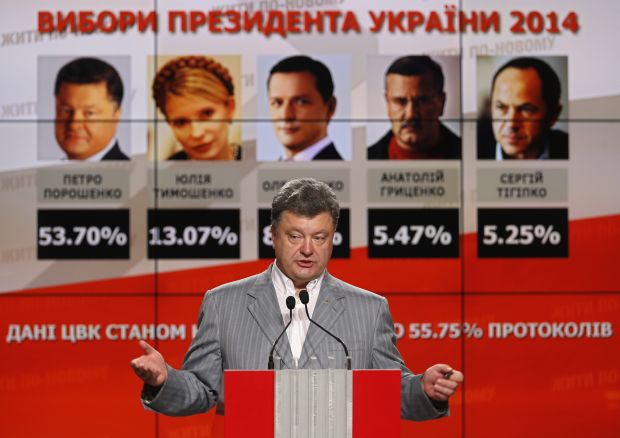 OXFORD, England (CNS) — The Ukrainian Catholic Church has welcomed the victory of a billionaire candy tycoon in presidential election and praised the previous interim government for holding the country together in “dramatic circumstances.”

“These elections reveal the maturity of Ukrainian society and show it’s willing and able to take responsibility for the homeland,” said Bishop Bohdan Dzyurakh, secretary-general of the Ukrainian Catholic Synod of Bishops.

Ukrainians are ready to make decisions about their future “freely and democratically, without interference from outside, and this is the fruit of the revolution … which happened earlier this year,” he told Catholic News Service May 26.

Petro Poroshenko, 48, claimed outright victory in the May 25 presidential ballot after securing 56 percent of votes on a 60 percent turnout.

Bishops Dzyurakh told CNS he believed the new head of state, a Christian, would be “sympathetic to Catholics and open to all confessions” and able to “organize a new life” for the country.

“Of course, he’s taking over the Ukrainian state at the most dramatic time in its 23 years of independence, when an undeclared war is being waged against us by Russia,” said Bishop Dzyurakh. “But the Ukrainian nation has shown a great capacity for consolidation, and will be able to mobilize around the person it’s shown trust and confidence in.

“Unity will be Ukraine’s strength and guarantee the success of reforms which our state and society now urgently need,” he added

In the eastern provinces of Luhansk and Donetsk, armed separatists who had claimed independence after staging local referendums were reported to have disrupted the May 25 election and destroyed ballot boxes.

Heavy gunfire was reported May 26 in Donetsk, with military aircraft overhead, after pro-Russia militiamen halted flights at the local airport.

Bishop Dzyurakh said he believed Poroshenko would be accepted in eastern Ukraine. He said it was a “positive signal” the president-elect had promised to pay his first visit to the troubled Donbass region.

“We must distinguish between the bandit and terrorist groups active there and the local people who reject violence, even if they took part in the illegal referendums,” the bishop said.

“The new president must stop the undeclared war being waged there by separatists with Russia’s support and liberate Donetsk and other areas from the terrorists who are destroying this country. They’re part of Ukraine, and the new head of state must restore peace, security and development there as soon as possible.”

PREVIOUS: Families tell pope their concerns during lunch in Bethlehem

NEXT: Pope to meet with sex abuse victims