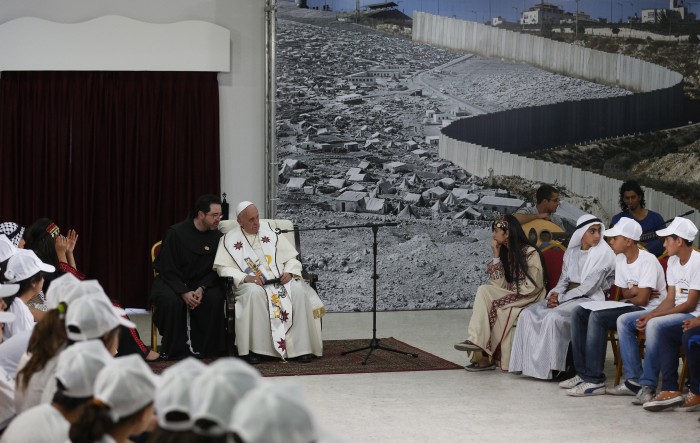 Pope Francis greets children from the refugee camps of Dehiyshe, Aida and Beit Jibrin at the Phoenix Center of the Dehiyshe Refugee Camp near Bethlehem, West Bank, May 25. (CNS photo/Paul Haring)

BETHLEHEM, West Bank (CNS) — Pope Francis told young Palestinian refugees to look to the future and to always work and strive for the things they wanted.

“Remember that violence cannot be defeated by violence; violence can only be defeated with peace — with peace, effort and dignity to move the nation forward,” he told those who greeted him during a 20-minute visit at the Dehiyshe Refugee Camp’s Phoenix Cultural Center.

As Pope Francis arrived he was warmly welcomed by the center directors and representatives of the camp. He entered the center flanked by a boy and a girl in traditional dress. A large white chair was brought out immediately so he could sit inside the main hall.

Children wearing white caps and shirts held up signs in English and Arabic with slogans such “I’ve never seen the sea” and “I want freedom of worship.”

Speaking in Spanish, which was translated into Arabic by a Franciscan priest, Pope Francis said he had understood the children’s English words, and the Arabic had been translated for him.

“I understand what you are telling me and the message you are giving me,” he said. “Don’t ever allow the past to determine your life, always look forward. But do and act and strive for the things you want.”

A boy from the camp welcomed the pope in the name of all the children and told him that the camp was a symbol of Palestinian suffering.

“We Palestinian Christians and Muslims believe in one God, who created the world, and we were created not to fight and be divided but to be united,” said the boy, whose name was not released. “We children of Palestine have not lost hope for the future, and your visit to Bethlehem strengthens our feeling that we must have peace even though we are living under the oppressive occupation of our country. We appreciate all the values you represent, and we would like to live in peace and dignity in our land and our country. ”

He told the pope that the Palestinians were in need of his prayers and support to rid themselves of the occupation.

“We send you peace from the land of our ancestors,” they sang.

After they finished the pope complimented the children on their singing, and they presented him with a large carved olivewood arm and hand grasping a key, symbolic of the homes they lost.

“May God bless you, and I ask that you pray for me,” Pope Francis said.

As he walked out, the pontiff stopped to shake the hands of the children, spending a few moments with them.

PREVIOUS: On last morning in Holy Land, pope reaches out to Muslims, Jews

NEXT: Families tell pope their concerns during lunch in Bethlehem