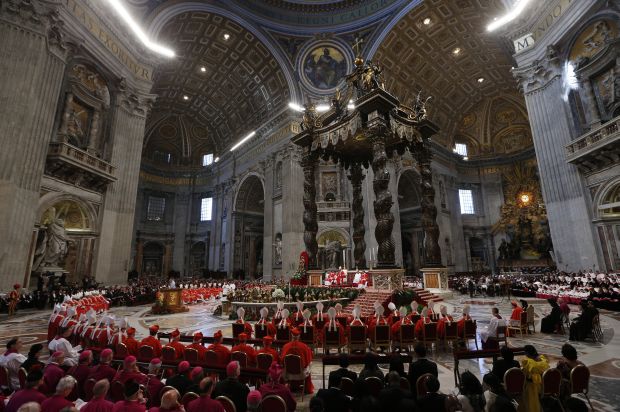 Pope Francis celebrates a Mass marking the feast of Sts. Peter and Paul in St. Peter's Basilica at the Vatican June 29. The pope presented the pallium to 24 archbishops from around the world during the liturgy. (CNS photo/Paul Haring)

VATICAN CITY (CNS) — After placing woolen bands, called palliums, over the shoulders of 24 archbishops from around the world, Pope Francis urged them to trust in God and not seek refuge in power or prestige.

“Trust in God banishes all fear and sets us free from every form of slavery and all worldly temptations,” he told the archbishops, including Archbishop Leonard P. Blair of Hartford, Connecticut.

The archbishops from 22 countries were named over the course of the last year. The lamb’s wool pallium they received from the pope June 29 symbolizes their unity with pope and their authority and responsibility to care for the flock the pope entrusted to them.

As is customary, an Orthodox delegation from the Ecumenical Patriarchate of Constantinople attended the Mass for the feast of Sts. Peter and Paul, the patrons of the Vatican and the city of Rome. Pope Francis greeted Metropolitan John of Pergamon, head of the delegation, at the beginning of the liturgy in St. Peter’s Basilica, then walked with him after Mass to venerate the statue of St. Peter in the basilica built over his tomb.

In addition to the Mass June 29 and the recitation of the Angelus afterward, Pope Francis had a full weekend of appointments. His last-minute cancellation of a visit to Rome’s Gemelli Hospital the afternoon of June 27 raised concerns about his health.

Jesuit Father Federico Lombardi, Vatican spokesman, had said the pope suddenly felt ill, but there was no reason for alarm. At the beginning of the Mass June 29, the pope’s voice sounded deeper than normal and his breathing a bit labored, but by the time he got to his homily, he sounded better.

During his homily, Pope Francis asked the archbishops to consider what, if anything, makes them afraid.

“And if we are afraid, what forms of refuge do we seek in our pastoral life to find security? Do we look for support from those who wield worldly power? Or do we let ourselves be deceived by the pride which seeks gratification and recognition, thinking that these will offer us security?”

He told the archbishops, “Today the Lord repeats to me, to you, and to all pastors: Follow me! Waste no time in questioning or in useless chattering; do not dwell on secondary things, but look to what is essential and follow me.”

Jesus, he said, tells the archbishops and all Christians: “Follow me without regard for the difficulties. Follow me in preaching the Gospel.”

“Follow me by speaking of me to those with whom you live, day after day, in your work, your conversations and among your friends,” the pope said. “Follow me by proclaiming the Gospel to all, especially to the least among us, so that no one will fail to hear the word of life which sets us free from every fear and enables us to trust in the faithfulness of God.”

After the Mass, Archbishop Blair told Catholic News Service, “The pallium is a symbol in Catholic faith and liturgy — as the prayers and the text of the liturgy today made clear — of the communion and unity of the church.”

Standing between an archbishop from Brazil and one from Pakistan, “where the church has been having a very difficult time,” he said, “you appreciate that we are all one, in communion with the successor of Peter, the Holy Father.”

“The pallium is a yoke, but Christ said my yoke is easy and my burden is light,” the archbishop said.

Before receiving the pallium, the archbishop said he prayed at the tombs of Sts. Peter, Paul, John Paul II and John XXIII. “These were great spiritual experiences, because we know as Catholics that these are not just dead people; we are in communion with them,” he said. “I prayed to them to help me be a good archbishop.”

The annual exchange of delegations on the Vatican’s and patriarchate’s feast days, as well as the meeting between the pope and patriarch in Jerusalem and again at the Vatican in early June for the prayer for peace in the Holy Land, allow Catholics and Orthodox “to express the love uniting us in Christ and to renew our mutual desire to walk together along the path to full unity,” the pope said.

Whenever divided Christians “choose to look at one another with the eyes of faith and to see ourselves as we truly are in God’s plan,” rather than as “we have become as a result of the historical consequences of our sins,” the pope said, it is a result of God’s grace.

If Christians learn to look at one another the way God looks at them, he said, “our path will be even straighter and our cooperation all the more easy.”

In a letter sent for the feast day, Patriarch Bartholomew also mentioned their recent meetings, saying the prayer for the Holy Land was “was profoundly and personally moving, while at the same time conveying a message of our Lord’s peace and love to a contemporary world that so thirsts for this.”

Contributing to this story was Francis X. Rocca at the Vatican.

NEXT: Social ills are result of political, not just moral failures, pope says