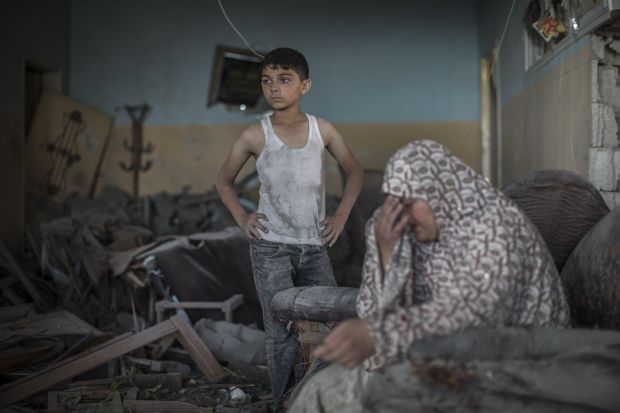 A Palestinian woman cries July 17 while sitting next to her son in their Gaza City house, which was badly damaged in an overnight airstrike by Israeli Defense Forces. Caritas Jerusalem officials say Gaza civilians are paying the price for the Israeli-Hamas conflict. (CNS photo/Oliver Weiken, EPA)

JERUSALEM (CNS) — The head of Caritas in Jerusalem said he would launch an international appeal to help with the Gaza Strip and would not wait until the end of Israeli-Hamas hostilities, as he had done in the past.

Father Raed Abusahlia, general director of Caritas Jerusalem, said July 18 that more than 80,000 Palestinians had been displaced and 1,250 homes have been completely demolished in Israeli airstrikes and the invasion of Gaza in July. He said 80 percent of the Gaza Strip was without electricity and 90 percent of people did not have drinkable water.

(See a related story on life among Gazans during the brief cease fire July 17.)

“Families are leaving everything behind and they don’t know what they will be coming back to,” he told Catholic News Service. “It is very difficult. There will be a lot of work to do afterward.”

Israeli launched a ground offensive in Gaza July 17, and in an email to Father Abusahlia that night, Amin Sabbagh, Gaza Caritas staff coordinator, wrote: “We are facing heavy attack from the sea, from the air and from land. There are lots of explosions everywhere, and people are afraid. Children are scared and women are crying. The situation is impossible. We pray that the Lord brings his peace upon us.”

“This needs to stop on both sides,” Father Abusahlia said. “We would have liked Hamas to have accepted the (Israeli-proposed) cease-fire,” but Hamas, which controls the Gaza Strip, also wants “the lifting of the blockade and an opening of the crossings from both Israel and Egypt.”

“They don’t want just a cease-fire,” the priest said. Referring to the seven-year Israeli-imposed blockade of the Gaza Strip, he added, “1.7 million people in Gaza should not remain in the biggest prison.”

The priest said Gazans need hospital supplies. He said Caritas medical staff had been volunteering at local hospitals as well as helping where they could from their homes with the use of first aid kits distributed by Caritas after the fighting in 2012.

Despite calls by Hamas not to leave their homes, thousands of people in 14 targeted quarters heeded Israeli warnings and evacuated and were being sheltered in U.N. school buildings. Some Palestinians remained in their homes, fearing theft in tough economic times.

Auxiliary Bishop William Shomali of Jerusalem said the school at Holy Family Parish in Gaza had been opened to those fleeing their homes.

“Many innocent people have been killed. The human pride is terrible, and the result is the loss of innocent people,” Bishop Shomali said. “We need an immediate cease-fire both on southern Israel and in Gaza. People are afraid, tired, they don’t sleep.”

In Jerusalem, Matthew McGarry, country representative for Catholic Relief Services, told CNS he was in regular contact with staff in Gaza. He said they told him that although militants had been launching missiles in Israel from civilian areas, many people have also been killed by Israeli airstrikes in areas where there are no launch sites.

A young CRS intern and her family were killed while sitting in their house, he said.

“She was just a young woman trying to improve her situation,” he said. “As with everything, it is not one way or the other. Certainly there are launch sites in civilian areas, but innocent civilians are being killed in their homes.”

He said CRS was working to procure nonfood items for Gazan residents for a time when staffers could distribute them.

“It has been terrible. People are fasting for the month of Ramadan, they are not eating or drinking during the day and they have only a few hours of sleep with the airstrikes and the drones flying overhead,” said McGarry. “It is very frightening, frustrating and disappointing. Clearly this latest round of hostilities is more intense. The indiscriminate targeting of civilians is unacceptable, whoever is doing it.”

Dr. Issa Tarazi, executive director of Near East Council of Churches Department of Services to Palestinian Refugees in Gaza, told Catholic News Service July 18: “There is shooting everywhere, bomb strikes and airstrikes. There are explosions all around. Nobody can move.

“Gaza is so crowded; everywhere you shoot, there are people. We have experience with this, and we don’t want it to be repeated,” he said.

In a post on the Spanish website of the Institute of the Incarnate Word, Father Jorge Hernandez, parish priest in Gaza, said he had shared the translated message of support from Pope Francis with this parish and other Christians.

“Dear brother, I am with you and the sisters and the entire Catholic community. I accompany you with my prayers and closeness. May Jesus bless you and the Virgin Mary protect you,” Pope Francis wrote in Spanish to his fellow Argentine priest.

Father Hernandez, who asked for prayers, spoke of visiting his parishioners, where he saw “terrible moments of fear, confusion, stress, crying, but always, always, always at the end of their stories is the profound confidence in … praising God.”

NEXT: Pope calls for prayers as militants chase all Christians out of Mosul