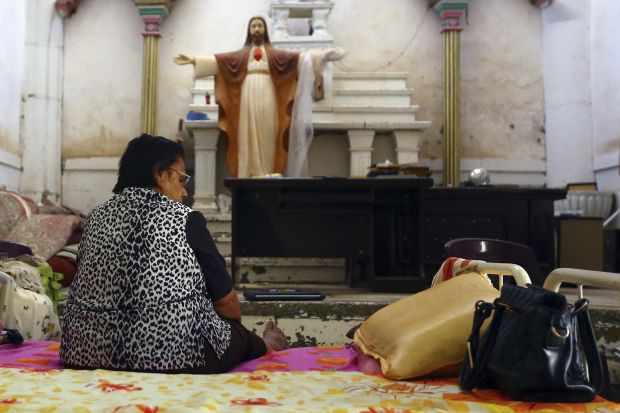 An Iraqi Christian woman fleeing the violence in the Iraqi city of Mosul sits inside the Sacred Heart of Jesus Chaldean Church in Telkaif, Iraq, July 20. (CNS photo/Reuters) 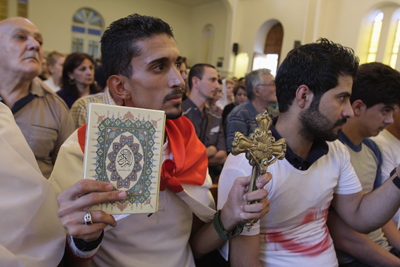 “Violence isn’t overcome with violence. Violence is conquered with peace,” the pope said before leading thousands of pilgrims gathered in St. Peter’s Square in a moment of silent prayer July 20.

“Our brothers and sisters are persecuted, they are chased away,” he said, as he assured Christians in all of Iraq and the Middle East of his “constant prayers.”

The pope’s plea came as the last Christian families living in Mosul were forced from the city after facing increasing threats, violence and intimidation.

The Islamic State group, which has taken control of Mosul, Iraq’s second-largest city, was threatening to kill any Christians who did not convert to Islam or pay a tax, Syriac Patriarch Ignace Joseph III Younan told Vatican Radio.

The militants in Mosul also burned to the ground the building housing the Syriac bishop’s office, residence and library, and everything inside, he said July 19.

Islamic State fighters “have already threatened that if they don’t convert to Islam, all Christians will be murdered. It’s terrible! This is a disgrace for the whole international community,” he told the radio.

The international community must immediately halt all aid to the Islamic State group, he said.

“Whom are they getting their weapons from? From these extremist nations in the (Persian) Gulf, with the approval of Western political leaders because they need their oil.”

The patriarch said the world community must uphold human rights and the freedom of religion.

“We are in Iraq, Syria and Lebanon: We Christians weren’t imported, we’ve been here for millennia and, therefore, we have the right to be treated as human beings and citizens of these countries,” he said.

Patriarch Younan spoke with Pope Francis by telephone July 20 while visiting Rome and told him of the “disastrous” situation in Mosul.

The pope said “he was following closely and with anxiety the plight of Christians” in Mosul, the patriarch told Catholic News Service.

During their nine-minute phone conversation, the patriarch begged the pope “to continue intensifying efforts with the powerful of this world” and to warn them “that it is a mass purification based on religion which is underway in the province of Ninevah,” whose capital is Mosul.

“What a shame for the silence of the so-called ‘civilized world'” in response to the tragedy, the patriarch told CNS via email. 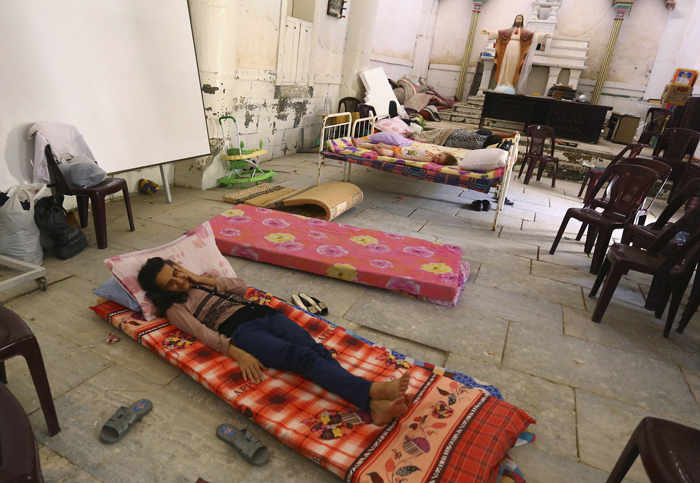 The Syriac patriarch was in Rome with retired Syriac Archbishop Basile Georges Casmoussa of Mosul and Syriac Catholic Archbishop Ephrem Yousif Mansoor Abba of Baghdad, to meet with Archbishop Dominique Mamberti, the Vatican’s foreign minister, and explain the plight of Christians in Mosul and surrounding areas.

The patriarch proposed that the Vatican call on its diplomatic corps members to urge their respective governments to take “appropriate measures in order to prevent further killing and abusing of Christians and other minorities in the name of a religion.”

Earlier, militants occupied Mosul’s Chaldean Catholic and Syriac Orthodox cathedrals, removed the crosses at the front of the buildings and replaced them with the Islamic state’s black flag. Tombs and other places of worship were reported to have been desecrated, too.

Militants singled out homes belonging to Christians and marked them in red paint with the letter “N,” for “Nazarat,” which means Christian, as well as “Property of ISIS,” — the Islamic State group, said Chaldean Auxiliary Bishop Saad Sirop of Baghdad.

“Our worst fears have come true and we don’t know what to do,” he told Aid to the Church in Need.

Those who fled their homes with whatever possessions they could carry were then stripped of everything they owned by the militants at the city’s checkpoints, said Archbishop Jean Sleiman, the Latin-rite bishop of Baghdad.

The militants took people’s belongings, money, personal items “even their cars, leaving them with nothing and forcing them to walk miles under the sun to get to the first Christian villages outside the city where they’re welcomed,” he told SIR, the Italian bishops’ news agency.

The militants are like “a wall” as they only repeat: “Between us there is nothing but a sword,” the patriarch said. He added that “there is no one of authority to face,” so people “don’t know where they come from and what they really want.”

Patriarch Sako said that as late as the end of June, 35,000 Christians had lived in Mosul, and more than 60,000 lived there before the U.S.-led invasion in 2003. But now, “for the first time in the history of Iraq, Mosul is now empty of Christians.”

“Iraq is heading towards a humanitarian, cultural and historical disaster,” he said in an open letter to Iraqis and the world July 17.

“It is shameful that Christians are being rejected, expelled and diminished” from a land they have shared together with their Muslim fellow citizens for 1400 years, the patriarch wrote.

He urged Muslims who support the Islamic State “to reconsider their strategy and respect the unarmed innocent people of all ethnicities, religions and sects.” He asked Iraqi Christians to be rational, “calculate their options well,” to come together in solidarity and be patient as they prayed “until the storm passes.”

Syriac Catholic Father Nizar Semaan of Mosul told Fides that world leaders must do something concrete, like “include these groups in the list of terrorist organizations” as well as “make public the names of the countries and forces that finance them.”

He said intelligence agencies and some governments “know where certain weapons and money that keep these groups going come from. It would be enough to stop the flow for a month, and these groups would not have any more force.”

Also, Sunni leaders and followers must help isolate the jihadist groups and declare a religious ruling against them, which “would certainly have a significant effect,” the priest said.