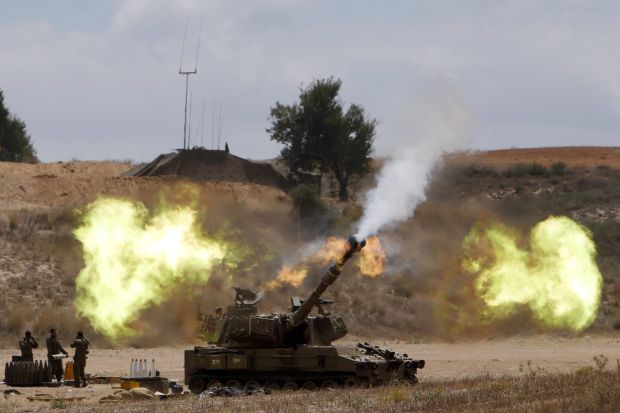 The morning after Israel launched a ground invasion of the Gaza Strip, the pope personally telephoned the two leaders July 18 to express “his very serious concerns about the current situation of conflict.”

Phoning Peres at 10 in the morning and Abbas at 11:30 Rome time, the pope told the leaders that the conflict was creating “numerous victims and was giving way to a state of serious humanitarian emergency,” the Vatican said in a written communique July 18.

The pope told the two presidents, whom the pope “considers to be men of peace and who want peace,” that constant prayer was needed.

He also urged them to “work hard at making sure all interested parties and those who have political responsibilities on the local and international levels dedicate themselves to bring an end to all hostilities, striving to foster a truce, peace and a reconciliation of hearts,” the Vatican said.

The pope assured the two leaders of his “constant prayers” as well as the prayers of the whole church “for peace in the Holy Land.”

Meanwhile, the pope also assured the parish priest of the Holy Family Church, the only Catholic parish in Gaza, of his prayers.

One of the pope’s secretaries sent an email around 7 p.m. July 17 to Father Jorge Hernandez, an Argentine priest of the Institute of the Incarnate Word.

According to the Vatican, the brief message said, “I accompany you all with my prayers. May the Holy Virgin keep watch over you.”

Holy Family Parish had been holding eucharistic adoration and celebrated a special Mass “to implore forgiveness, justice and peace for all,” according to Vatican Radio.

The priest has opened the parish school to “numerous families” who fled their homes in bombed neighborhoods, according to Fides, the Vatican’s missionary news service. The families “didn’t sleep a wink all night because of the bombing,” a Brazilian nun, identified only as Sister Laudis, told Fides.

“The houses were shaking, the children were crying,” said the nun who said she had spoken with Father Hernandez after leaving Gaza July 17 for Beit Jalla, a village near Bethlehem.