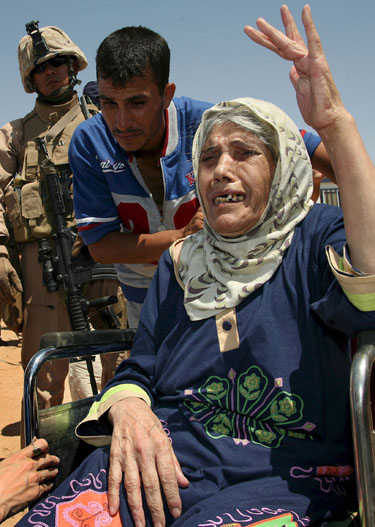 MANCHESTER, England (CNS) — A group of 11 sick, disabled and elderly Iraqi Christians — including an 80-year-old woman with breast cancer — defied terrorists who ordered them to convert to Islam or be beheaded, saying they preferred death to giving up their faith.

The united resistance prompted the Islamic State extremists to drop their demands and order the Christians to immediately leave their village of Karamless after first robbing them of their possessions, according to one of the survivors.

Sahar Mansour, a refugee from Mosul, told Catholic News Service in an Aug. 18 email that the group turned up at Ankawa refugee camp, where she is living, after they were released by the Islamist fighters. They had remained behind in Karamless because they were too weak to flee when the town was overrun by Islamic State militants the night of Aug. 6-7.

Mansour said she met the 80-year-old woman with cancer, who gave her name as Ghazala, in Ankawa Aug. 18 and heard her account of their escape.

“Members of the group scolded the terrorists for ignoring Islamic sacred texts that forbade forced conversions of non-Muslims.”

“When the people of Karamless fled from the village they (the elderly) were alone,” Mansour said. “She (Ghazala) told me when they woke up in (the) morning they were surprised when they saw nobody in the village.”

Instead they were “afraid and terrified,” she continued, when they met masked fighters from the Islamic State, who ordered them to go home and remain indoors.

Mansour said Ghazala told her that on Aug. 16, the terrorists assembled the group “and told them either to convert or to be killed by sword.”

“Ghazala told me that all the people told the terrorists that ‘we prefer to be killed rather than convert,”‘ Mansour said. She said Ghazala added that members of the group scolded the terrorists for ignoring Islamic sacred texts that forbade forced conversions of non-Muslims.

Mansour said the elderly told the militants that the Islamic State had nothing to gain from the conversion of a group of sick, disabled and elderly people.

“When ISIS heard that they told the people to leave Karamless immediately, without taking anything, to leave with only with the clothes they were wearing,” she said.

“ISIS took all their money from all of them and their gold,” Mansour said, adding that one person had the courage to ask the terrorists to return some of their money so they could buy food for their journey to the Kurdistan region of northern Iraq.

The group of five men and six women later arrived at the Kalak checkpoint, the gateway to Kurdish-controlled territory, in two cars.

There, they were allowed to contact relatives already in refugee camps, who were taken to meet them, Mansour said.

Ghazala was reunited with her brother, and she is receiving medical treatment for her cancer.