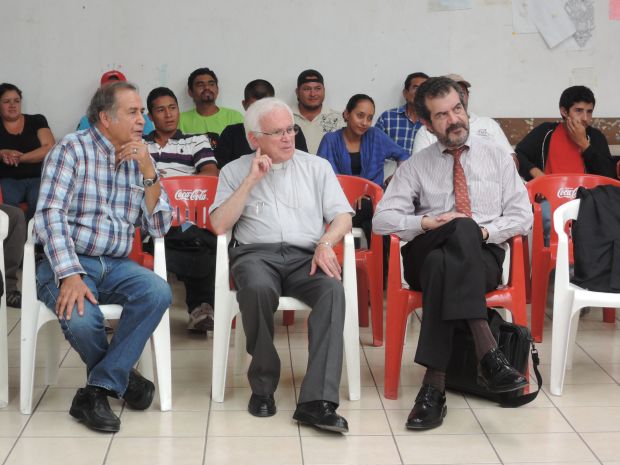 SALTILLO, Mexico (CNS) — Migrants traveling through Mexico still run the risk of robbery, rape and kidnap, despite laws approved in recent years to curb such crimes, said a new report by the Inter-American Commission on Human Rights.

“They don’t know their rights or prefer not to exercise them if it means being visible” to the authorities, said the report, written by commission member Felipe Gonzalez and containing contributions from Catholic-run shelters for Central American migrants moving through Mexico. The commission is part of the Organization of American States.

In Saltillo Aug. 19, the day after the report was released, Gonzalez told local leaders the situation of not trusting the authorities or knowing their rights “forms a vicious circle of impunity. … They don’t have access to justice. They’re scared of being detained. If they are detained, they are unable to exercise their rights.”

The report highlighted Mexico’s unsafe conditions for Central American migrants, who have headed to the United States in increasing numbers — especially children attempting to reunite with parents or escape poverty and violence. More than 50,000 unaccompanied minors have arrived in the United States so far this year, according to U.S. Customs and Border Protection.

The report was written with research from 2011 and included visits to Catholic-run shelters in Chiapas, Oaxaca and Veracruz states. Advocates for migrants say the report remains applicable, despite the delays in its release.

“It’s still a current, relevant report,” said Alberto Xicotencatl, director of Belen, Inn of the Migrant, the diocesan-run shelter in Saltillo, 190 miles from the U.S. border at Laredo, Texas.

Still, some of those working with migrants questioned the timing.

“It’s a report that migrant organizations in Mexico had hoped would come to light since February 2012,” which was the original time frame established for it, said Jose Luis Manzo, advocacy director at the Saltillo shelter.

Gonzalez said the report was up to date; he said his findings were updated as time passed, and he attributed delays in its publication to having a small team.

The report touched on topics such as extortion and illegal payments. For example, criminal groups now charge migrants $100 to climb aboard “La Bestia,” a train that carries them the length of Mexico.

Maria Pineda, 40, walked nearly 24 hours with two other Honduran migrants in Guanajuato state to avoid paying the cost of climbing aboard La Bestia, but they were attacked by assailants with knives and broken beer bottles.

“We walked almost naked,” she told Catholic News Service at the Saltillo shelter, adding they were robbed of all they were carrying.

Ingrid Prera, 17, fled the Peten department of Guatemala with her infant son, Jhony, hoping to reach the United States. She took the bus through Mexico, paying federal police 200 pesos (US$15) on three occasions, she told CNS in Saltillo.

Kidnap also is still common, although Father Alejandro Solalinde, director of the Brothers on the Road shelter in Oaxaca state, said the days of mass abductions appear to be over. “It’s not as out of control,” he said in April.

Kidnappers ask migrants’ relatives to pay ransoms, which the report said are processed through money-transfer companies like “Western Union and other similar agencies.”

Female migrants risk sexual assault along the way and, before leaving Central America, seek injections of contraceptives — known as the “anti-Mexico injection” — according to the report, while some officials demand favors in exchange for passage.

“Sexual violence has become a part of the trip for many female migrants,” the report said.

Children have streamed out of Central America over the past year, though the phenomenon of teenagers trying their luck is not new. The report cited a Catholic Relief Services survey that found 47 percent of the boys, girls and adolescents migrating “report having experienced some type of abuse from the time they left home until they’re repatriated.”

Gonzalez called on the Mexican government, which fights for the rights of Mexicans living in the United States and backs human rights initiatives in international organizations, to apply the same standards at home. He also called for Mexican laws to be applied in favor of migrants.

“There’s an enormous breach between the law and how it’s practiced,” he said.

Mexico has approved new laws in recent years to improve migrant safety and made being in the country without the proper papers an administrative rather than a criminal offense. Migrants also have the right to denounce crimes committed against them, and some states have established special prosecutors’ offices to address such offenses.

The report said most of the offices lacked resources and staff, while coordination was lacking. A plan to provide migrants with temporary visas has not been implemented.

“The discourse is tied to human rights, but when the moment comes for its application, that’s when it comes undone,” Xicotencatl said.

The report made special mention of civil society and the Catholic-run shelters, which have housed, fed and clothed migrants — activities classified as crimes in Mexico until recently.

Their work “is of vital importance for safeguarding the lives and integrity of thousands of migrants,” it said.

“On many occasions, the Mexican state has not acted in a diligent way to protect (migrants) or, in the worst of the cases, state authorities have been the ones to directly or indirectly violate the human rights of migrants and their defenders.”

The report highlighted threats received against shelters and staff in Saltillo, Veracruz, Oaxaca and Tabasco states. It called on the government to start awareness campaigns “that differentiate the crime of migrant trafficking from humanitarian assistance given by migrant shelters.”

Staff in Saltillo expressed satisfaction with the report, calling it a vindication of their work, which started more than a decade ago in response to migrants being attacked and killed along the nearby railways.

“It echoes what we’ve been constantly saying,” Xicotencatl said.

“It also legitimizes our work. (Migrant) defenders aren’t making up cases. The commissioner came to Mexico and met with authorities, migrants and civil society and is repeating what we’ve been sharing for many years with the (Mexican) state.”

A full copy of the report is available here.