‘Dolphin’ and families get a wholesome new tale 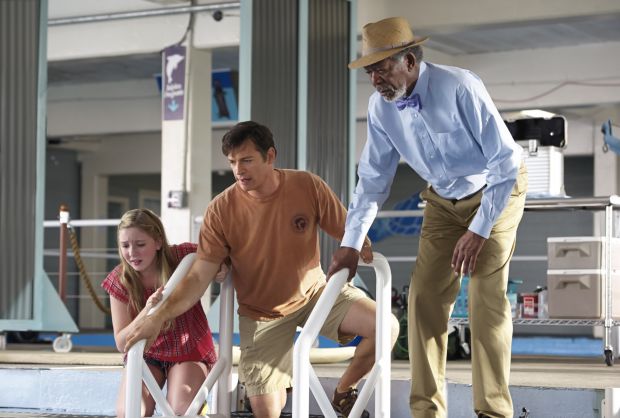 NEW YORK (CNS) — Flipper’s cousin is making waves again in “Dolphin Tale 2” (Warner Bros.), the dramatic follow-up to the 2011 film about the marine mammal with the prosthetic tail.

Charles Martin Smith returns to direct this family-friendly film about Winter, whose real-life triumph over disability has made her a symbol of hope to young and old around the world.

Winter, for the unfamiliar, washed up on a Florida beach, tangled in a fishing trap. Discovered by young Sawyer (Nathan Gamble), the female dolphin was brought to the Clearwater Marine Aquarium. Doctors there were forced to amputate her severely injured tail, but Winter was fitted with a space-age prosthetic, a first.

We pick up the story a few years later, and Winter is the star attraction at Clearwater, where Sawyer — now in his teens — is a volunteer guide, along with his pal, Hazel (Cozi Zuehlsdorff).

Hazel’s dad, Clay (Harry Connick Jr.), runs the aquarium which is expanding by leaps and bounds. As such, he is under heavy pressure from investors to keep Winter happy and healthy.

That’s easier said than done. Winter’s surrogate mother, the elderly dolphin Panama, has died (a fleeting scene that may upset young viewers). By law, dolphins in captivity must live in pairs, as they crave companionship and social interaction in the water.

Spare dolphins are hard to come by, and without a replacement — and fast — the authorities will step in and transfer Winter to another aquarium. Winter, moreover, is in a funk and refusing to perform, to the dismay of paying customers.

Even champion surfer Bethany Hamilton drops by to help. Hamilton, who lost an arm to a shark, was the subject of another inspirational water-based film, 2011’s “Soul Surfer.”

Overall, it’s a whale of a tail — make that, tale — with a sweet side story of puppy love, as Hazel admires the clueless Sawyer, preoccupied by the plight of his aquatic pal.

“Dolphin Tale 2” is that rare Hollywood film: wholesome and fun for all ages, with nice messages about family, responsibility, and perseverance. The Catholic News Service classification is A-I — general patronage. The Motion Picture Association of America rating is PG — parental guidance suggested. Some material may not be suitable for children.