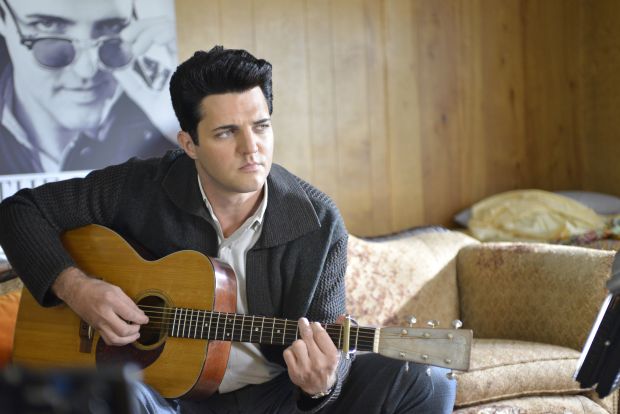 Blake Rayne stars in a scene from the movie "The Identical." (CNS photo/Katherine Bomboy Thornton, City of Peace Films)

NEW YORK (CNS) — Although they may be sociologically fascinating, in the cultural scheme of things, Elvis Presley impersonators are not widely deemed to occupy a particularly exalted position.

Yet no one can deny the enduring appeal of an entertainer who, close to 40 years after his death, still has not only legions of fans but hosts of followers devoted enough to settle for myriad attempts at imitation now that the real thing is no longer around … at least, not officially.

Moviegoers’ attitudes toward the former occupant of Graceland will likely shape their reactions to the reality-related drama “The Identical” (Freestyle). Director Dustin Marcellino’s film takes its premise from the historical fact that Elvis was a twin. Sadly, though, his brother Jesse was stillborn.

But what if it had been otherwise? In the fictional version of events pursued by screenwriter Howard Klausner’s script, the newborn brothers’ impoverished parents, William (Brian Geraghty) and Helen (Amanda Crew) Hemsley, are in desperate straits as a result of the Depression. So they make the traumatic decision to give one of their sons up for adoption.

They find suitable foster parents in circuit-riding revivalist preacher Reece Wade (Ray Liotta) and his wife Louise (Ashley Judd). The Wades are a happily married couple whose principal cross in life so far has been their childlessness.

For reasons that are not really made clear, however, the Hemsleys are at pains to conceal this arrangement from the world. Accordingly, they swear the Wades to secrecy and give out a cover story that one of their boys has died. They even hold a funeral for him.

Flash forward to the 1950s and Drexel (Blake Rayne), the lad the Hemsleys kept, is rocketing to musical stardom. His obscure but equally talented lookalike Ryan Wade (also Rayne), meanwhile, is being pressured by his father, now a settled pastor, to follow him into the ministry.

But, in a sort of evangelical riff on the old dilemma Al Jolson faced in “The Jazz Singer,” Ryan prefers belting out tunes to thumping the Scriptures. Eventually, Ryan gets the opportunity to pursue his favored career by impersonating his long-lost counterpart under the moniker of the title. Defied Dad is, needless to say, disappointed.

Wholesome and faith-friendly, “The Identical” is a homespun piece of entertainment with a goodhearted but naive tone that will not be to the taste of city slickers. As for its suitable audience, a single vague reference to the connection between romantic passion and the arrival of babies may debar those who are still members of the stork club.

The Catholic News Service classification is A-I — general patronage. The Motion Picture Association of America rating is PG — parental guidance suggested. Some material may not be suitable for children.

NEXT: Movie review: The Last of Robin Hood