Advocates say vouchers for school choice about fairness, not ‘handouts’ 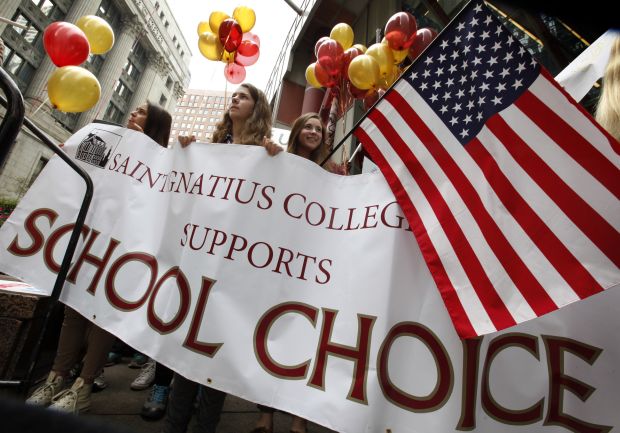 The rally was aimed at demonstrating the need for more families to be able to enroll their children in the schools they choose, whether they are Catholic schools, other private schools, charter schools or other public schools.

In most cases, speakers said, the main barriers to school choice are economic.

“Parents are the primary educators of their children and deserve the right to choose their children’s education,” said Patrick Landry, principal of Maternity BVM School in Chicago’s Humboldt Park neighborhood.

Twenty years ago, there were four Catholic elementary schools in Humboldt Park. Maternity BVM is the last one, Landry said, and it intends to remain open.

“Our school is a beacon of hope and love for our students,” Landry said. “We’re not going anywhere.”

Ninety-nine percent of the school’s 231 students are Latino, and 95 percent qualify for free or reduced-price school lunches, he said. The average family income is $22,000 a year, and families are spending 10 to 20 percent of their income on tuition.

“They are making an investment in their children, because they want a life for their children that is better than theirs,” Landry said.

School choice advocates want the state to find a way to direct more money to nonpublic schools, whether by offering vouchers that would allow students to take a portion of the money their public school districts would have spent on educating them and applying it to the schools of their choice, or by allowing tax credits for private school tuition or for individuals and businesses that donate to scholarship funds.

Illinois does offer a tax credit for kindergarten through 12th grade educational expenses; the maximum credit is $500 for families that spend $2,500 or more on tuition or other costs. 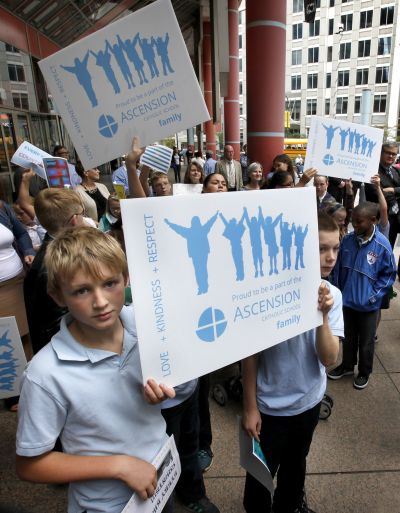 Students from Ascension School in Oak Park, Ill., listen as speakers give testimony on the issue of school choice at a rally outside an Illinois state building in Chicago Sept. 25. (CNS photo/Karen Callaway, Catholic New World)

But that’s a fraction of what parents pay for Catholic education.

The yearly tuition at Leo Catholic High School is $7,500, one of the lowest high school tuition rates in the Chicago Archdiocese, said Philip Mesina, principal of the all-male school. But it’s still too much for most of the families who send their sons there; after financial aid and scholarships, the average Leo family pays $4,000 a year.

“It’s a sacrifice every day for them,” he said. “They want their children to get a good education. They’re not looking for a handout. They’re looking for what’s fair.”

Students in the sophomore world religions class came to the school choice rally after learning that their parents pay property taxes to support public schools and pay tuition for them to go to Leo.

Khalid Manney, 15, said he chose to go to Leo after he met some people from the school at an elementary school basketball game and they invited him to shadow a student at the school for a day. He found a clean building with a warm, welcoming spirit, Manney said. 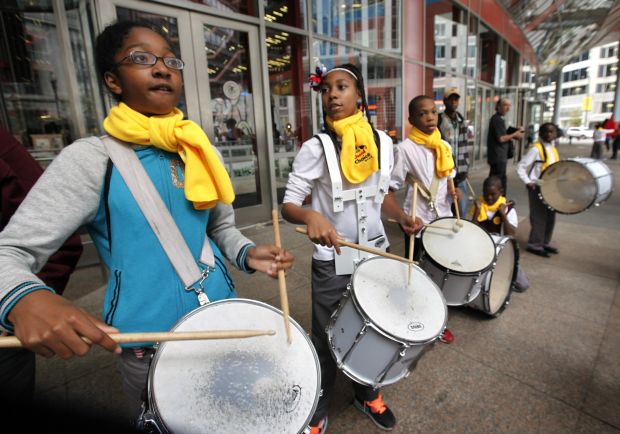 “It was my choice, but my parents agreed with me,” he said. He’s now a three-sport athlete — cross-country, basketball and track — and finished his freshman year with a 4.0 grade point average.

Leo was among more than a score of Catholic elementary and high schools represented at the rally.

Another group came from Pope John Paul II School. Parent and volunteer Maria Vega said the issue of school funding is very near to her heart — and her wallet. She has one child in eighth grade at Pope John Paul II, where yearly tuition is $3,800 for one child, and one at St. Ignatius College Prep, where tuition is $16,500. As at nearly all Catholic schools, some financial aid is available.

“This is very important to us,” she said. “We wanted to give our children a better education.”

She doesn’t think the public schools in her Brighton Park neighborhood offer the same quality education as the Catholic schools her children attend, and she said she would fear for their safety in public schools.

In addition to a better education, she said, her children have learned values and morals that they will carry with them their whole lives, and involvement in Pope John Paul II School has drawn her whole family into deeper involvement in their Catholic faith.

Trey Cobb, youth director of EdChoice Illinois, challenged the young people in attendance to work for school choice. Cobb, a 17-year-old junior at DePaul University, noted that he cannot yet vote, but he can make his voice heard.

“There is no progress without struggle,” he said. “We need to go back to our schools, go back to our neighborhoods, and tell everyone what we were doing today.”

NEXT: Sainthood cause for African-American priest heads to Vatican