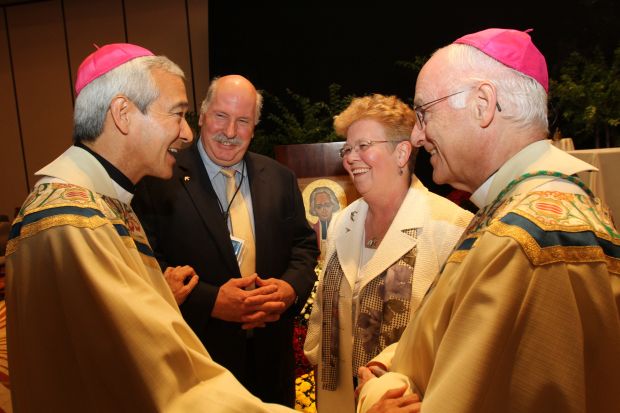 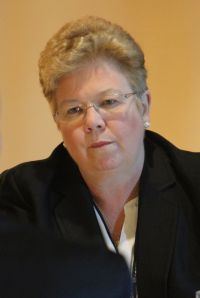 HAUPPAUGE, N.Y. (CNS) — Rosemary Sullivan firmly believes that God has directed her to serve the church in a special way.

For more than a decade, she has played an integral role in cultivating vocations to the priesthood, beginning with a part-time position in her diocese’s vocation office and eventually rising to her current role as executive director of the National Conference of Diocesan Vocation Directors.

“God has called me to take my talents to support his sons this way,” said Sullivan. “It’s not a job, it’s a ministry.”

In her fifth year as executive director, Sullivan oversees the national organization’s year-round efforts to provide support and ongoing education to vocation directors in 171 U.S. dioceses and major eparchies, as well as those in vocation ministry in other countries, including Australia, Canada, England, Italy, Mexico, Puerto Rico and Scotland.

Sullivan also serves as one of five consultants to the U.S. bishops’ Committee on Clergy, Consecrated Life and Vocations. She is the only layperson in the group.

Her biggest responsibility with NCDVD is to plan and manage the conference’s annual convention, this year held Sept. 19-26 on her home turf: Long Island. She worked tirelessly throughout the week, making sure the event ran smoothly for the 280 participants.

“The convention is the single-most important event that we offer our vocation directors,” said Sullivan, 56, who’s married and has four children.

Father Paul Hoesing, vocation director for the Archdiocese of Omaha, Nebraska, said Sullivan’s energy and skill sets are a blessing to the organization he heads as president.

“Rosemary brings great gifts of zeal and competency in organizing events, and she has great confidence doing that,” said the priest. “She has a whole lot of things going on in her mind and heart. She’s able to balance those and make decisions, and bring people into those decisions. She’s a master communicator as well. She’s a great asset.”

Sullivan’s office is based at Immaculate Conception Seminary in Huntington, New York, where she entered the vocation field in March 2002. Her first job was part-time program coordinator for the Diocese of Rockville Centre’s vocation director.

Sullivan joined the national organization as its first events coordinator in 2006 and was promoted to executive director in 2009.

Working in an office based at a seminary has helped Sullivan focus on her ministry. She has prayed, dined and walked the corridors with countless discerners, seminarians and priests for 12 years.

“I’m able to see them throughout all the phases, and that is a tremendous grace,” she told Catholic News Service. “It’s helped me with my work at the NCDVD.

“I saw a lot of these guys as discerners, some of them I knew when they were in high school. I walked with them throughout the application process. I see them as seminarians, and then I see them as newly ordained.”

Father Michael Duffy, an associate pastor at St. Kilian Church in Farmingdale, New York, is one of the men Sullivan has accompanied on the journey to the priesthood. He studied at Immaculate Conception Seminary and was ordained in 2012.

“I’ve known Rose since I was in high school, long before I became a priest,” Father Duffy said. “She has been a rock for me, especially during my time at the seminary. It was not infrequent to see a line of guys waiting to chat with her in her office. She was like another mother to us.”

Father Duffy said he still turns to Sullivan “to talk things through and to get a different perspective on dealing with difficult pastoral situations.”

Sullivan is affectionately called “Momma Rose” by many of the seminarians she’s come to know and befriend over the years. But aside from that maternal presence, she said her primary vocation is to be a “loving wife” to Gary, her husband of 28 years, and a “wonderful mother” to their children, Patrick, 25, Christopher, 23, Cathryn, 20, and Shannon, 17.

Sullivan’s family joins her at the convention every year. They assist her in various ways throughout the week, from manning the registration and information table to helping prepare conference rooms for presentations. Christopher, who’s studying to be a priest for the Diocese of Rockville Centre, was an altar server for Cardinal Dolan at the convention’s opening Mass.

Christopher, a seminarian at St. Joseph’s Seminary in Yonkers, New York, said his mother has been a positive influence in his life, especially when it came to discerning his vocation.

“She’s never pushed me,” he said. “She’s always said whatever God’s calling me to do, whether it be married life or priesthood, she would always support me. Just offering her support was the biggest thing in helping me in my vocation.

Rosemary Sullivan understands the stress many parents experience when approached by a son who expresses an interest in becoming a priest.

“The hardest part for a parent is to understand that God may not be calling their son to the same vocation he called them to,” said Sullivan. “My best advice would be to pray with your son and be open to the Lord.”

NEXT: Advocates say vouchers for school choice about fairness, not ‘handouts’