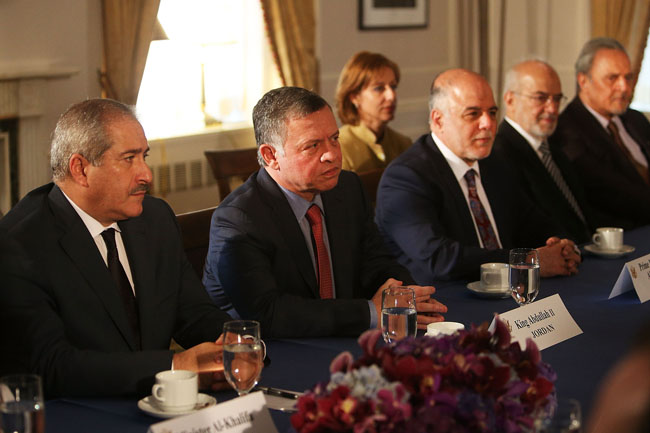 King Abdullah II of Jordan, second from left, meets Sept. 23 in New York with U.S. President Barack Obama and representatives from Iraq and from five Arab countries that have participated in airstrikes against ISIS. On Sept. 24, Cardinal Pietro Parolin, the Vatican's secretary of state, told the U.N. Security Council that addressing the escalation of terrorism requires a shared commitment from all nations. (CNS photo/Spencer Platt, EPA)

UNITED NATIONS (CNS) — Addressing the U.N. Security Council Sept. 24, the Vatican’s secretary of state said “terrorism represents a fundamental threat to our common humanity” and its escalation requires the response of a “shared commitment” from all nations.

“Nations must come together in order to fulfill our primary responsibility to protect people threatened by violence and direct assaults on their human dignity,” Cardinal Pietro Parolin said.

He also urged countries to address the root causes “upon which international terrorism feeds,” stressing that there is a “strong sociocultural component” that leads people to become involved in modern terrorist groups.

The cardinal said young people who join these organizations “often come from poor immigrant families, disillusioned by what they feel as a situation of exclusion and by the lack of integration and values in certain societies.”

He urged governments to use their resources to prevent people from “becoming foreign terrorist fighters” but to also engage with society to “address the problems of communities most at risk of radicalization and recruitment and to achieve their satisfactory social integration.”

To counter the “phenomenon of terrorism,” the cardinal emphasized that “cultural understanding among people and countries and social justice for all is indispensable.”

He said that the Holy See, representing a world faith community, has a “grave responsibility to condemn those who seek to detach faith from reason and instrumentalize faith as a justification for violence.”

He quoted Pope Francis, who said in Albania Sept. 21: “Let no one consider themselves to be the ‘armor’ of God while planning and carrying out acts of violence and oppression! May no one use religion as a pretext for actions against human dignity and against the fundamental rights of every man and woman, above all, the right to life and the right of everyone to religious freedom!”

Cardinal Parolin also quoted St. John Paul II’s 2002 message for the World Day of Peace, in which the pope said the right to defend countries from acts of terrorism does not provide a license to meet violence with violence.

He referenced a statement St. John Paul in the aftermath of 9/11, saying that efforts to stop terrorism “must be exercised with respect for moral and legal limits in the choice of ends and means. The guilty must be correctly identified, since criminal culpability is always personal and cannot be extended to the nation, ethnic group or religion to which the terrorists may belong.”

PREVIOUS: Youths cheer for bands and pray to Jesus at festival