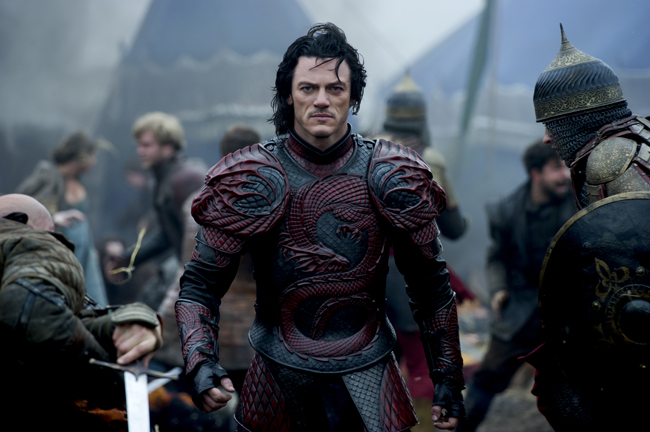 But director Gary Shore’s awkward attempt to provide the world’s most famous bloodsucker with a makeover also comes with moral ambiguities aplenty and a treatment of religion that’s equally hard to pin down, raising red flags for parents.

Set in the 15th century, the film draws on the connection between novelist Bram Stoker’s character Count Dracula and the historical figure Vlad III, Prince of Wallachia — aka Vlad the Impaler — whose patronymic Stoker chose as his garlic-averse nobleman’s last name.

With his impaling days behind him, formerly savage but now peace-loving Prince Vlad (Luke Evans) is under threat, early on in the movie, from the cruel Sultan of Turkey, Mehmed II (Dominic Cooper). Despite Vlad’s payment of his realm’s usual tribute to Mehmed, the Ottoman ruler has demanded more: a levy of 1,000 boys to be raised as soldiers for his army as well as the handing over of Vlad’s young son Ingeras (Art Parkinson) as a hostage.

Having endured the life of a hostage at the Turkish court himself during his youth, and swayed by the emotional pleas of his beloved wife, Mirena (Sarah Gadon), Vlad refuses. Lacking an army with which to fight the war that will inevitably follow his rebuff to Mehmed, however, Vlad is facing certain defeat.

So he turns for help to a cave-dwelling vampire (Charles Dance), hoping to share in the outcast’s superhuman strength. The terms of their deal give Vlad the powers he needs temporarily. But, while they last, he will have to resist the desperate urge to drink human blood that accompanies them. If he gives in to the temptation, he will become undead eternally.

Though his alliance with the occult is not without numerous negative consequences, on balance, Matt Sazama and Burk Sharpless’ screenplay implicitly endorses Vlad’s decision to use evil means to accomplish the good ends of protecting his family and his country. And viewers are invited to revel in the stylized mowing down of his enemies — easy stand-ins for contemporary extremists of the same religion?

Vlad himself is all over the map where faith is concerned. At one point, he angrily interrupts his fellow warriors’ prayers, insisting they will do no good. Yet he later visits a chapel and fervently implores God’s help in his struggle to forgo becoming a full-fledged vein-drainer.

Of course, the real point here is the spectacle of Evans holding off a whole army single-handedly and choreographing the movements of a vast swarm of angry bats. Accordingly, moviegoers may be too distracted by special effects — and too bored by the ponderous turns of phrase with which they’re interspersed — to want to probe any deeper.

The film contains pervasive combat violence with occasional gore, some gruesome images and brief nongraphic marital lovemaking. The Catholic News Service classification is A-III — adults. The Motion Picture Association of America rating is PG-13 — parents strongly cautioned. Some material may be inappropriate for children under 13.

PREVIOUS: Readers get a thrill with book’s unique plot and spiritual message

NEXT: For a warmhearted film with seamy underside, you be ‘The Judge’