Seeking the common good and avoiding polarization in Catholic media 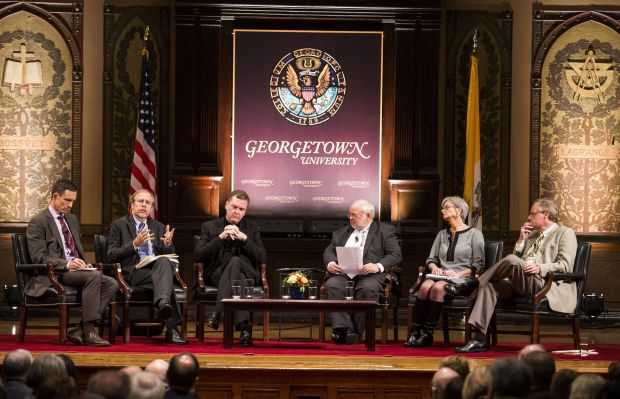 WASHINGTON (CNS) — Pope Francis’ call to Christians to examine and reconsider the way they treat others brings challenges for Catholic publications in combatting polarization within the church, said a panel of editors and publishers Oct. 16.

In a forum at Georgetown University, the struggles of “Seeking the Common Good in a Time of Polarization,” as the program was titled, were identified by representatives of Catholic newspapers and magazines as coming from their usual supporters as well as their usual critics.

The editors of Commonweal, First Things and America magazines, and the presidents of the National Catholic Reporter (NCR) and Our Sunday Visitor (OSV) newspapers acknowledged that their publications represent a spectrum of what are perceived to be conservative and progressive approaches to Catholicism.

Despite representing a wide range of readers, the panelists raised common problems in reporting on Pope Francis, including that too few Catholics are well versed enough in the church’s teachings to understand what he says in context, and that Americans tend to think of every issue as a win/lose proposition between two opposing sides.

Caitlin Hendel, president and CEO of NCR, said she has found that “covering the Catholic Church is not that different from covering Congress … you’re always trying to cover two sides… that are both trying to own the story.” That has happened with reporting on the Synod of Bishops, she said, with the two-week discussion on family life being covered as if it’s a political debate.

With Pope Francis, Hendel said, the pattern of news coverage has been: “He says something or his people say something. That becomes news. Then The New York Times or Huffington Post runs it and suddenly he is in favor of gay people … and then the next day, comes the other side, ‘No, he didn’t mean that.’ Then that becomes the story.”

At the synod, Hendel said, the debate became the story, yet the message Pope Francis has given over and over is that “we don’t have time” to get caught up in debates, that “these other stories are distracting us” from doing the work of reaching out to the disenfranchised and caring for the needy.

The range of Catholics who make up the target markets for the publications was described by the program’s moderator, John Carr, director of the Initiative on Catholic Social Thought and Public Life at Georgetown.

When America and other Jesuit magazines published a lengthy interview with Pope Francis, Carr quipped, “America said, ‘Come to America to hear what the Holy Father says.’ It was the Jesuit pope talking to a Jesuit journal. NCR said: ‘About time we had a pope who talks like this, but what about women?’ and OSV said, ‘This is wonderful, let me explain what the pope really meant.’ First Things sort of said: ‘This is what the pope should’ve said. And Paul (Baumann, editor of Commonweal) would’ve said: ‘What’s all this fascination with the pope?'”

America magazine is not typically identified as falling on either extreme of a political spectrum. NCR was founded during the Second Vatican Council by journalists who wanted a stronger voice for laypeople supporting change in the church. Our Sunday Visitor traces its origins as a counter voice to a popular anti-Catholic publication early in the 20th century. Commonweal is a lay Catholic journal of opinion. First Things was founded “to advance a religiously informed public philosophy for the ordering of society,” as the event’s program described it.

The panelists agreed that the pontificate of Pope Francis has been accepted by their readers in different ways — some with glee, some with nervousness and some with confusion. All said that no matter how their readers react, they find that in covering Pope Francis they sometimes take guff from their own usual supporters.

R.R. Reno, editor of First Things, said he gets “pushback from some of my donors, who canceled, saying we’re anti-capitalist.”

He explained that the magazine was founded as the Soviet Union was crumbling but socialism still seemed a viable form of government, which alarmed its strongly capitalist founders. But the world is now different, Reno said.

“Global consensus is now in favor of what First Things was founded to argue for,” he said, adding that it seems foolish to think there isn’t room for also focusing on the poor and marginalized as Pope Francis suggests. “At some point you have to take yes for an answer.”

Carr steered the panelists to discuss what responsibility they have in fighting polarization.

Paul Baumann, editor of Commonweal, said his journal strives to give voice to a wide range of opinion, debating the pros and cons of same-sex marriage, for example. “None of us has a corner on the truth,” he said. “If we’re going to get to it we have to get there together.”

Gregory Erlandson, president and publisher of OSV, focused on inadequate religious education as part of the problem. His publication was founded to educate Catholics about the church, he explained and it still takes that need seriously.

“Catholic journals and periodicals are the only widespread form of faith formation in the country,” Erlandson said. Recent polls show only 15 percent of Catholic elementary school children are in Catholic schools, and only 5 percent of Catholic high schoolers are. Doing a better job of educating Catholics about their own church’s teachings can go a long way toward cutting down on polarization, he said.

Jesuit Father Matt Malone, editor-in-chief of America, said that in times when demographics are “sliced and diced” to hit a narrow target market, any kind of Catholic journal “is going to be countercultural and is going to be edgy” because Catholic teachings and Christian discipleship cut across how people self-identify.

“I have met people who seem to think support for the minimum wage belongs to the deposit of faith,” he said by way of example. “I don’t think it does. I support the minimum wage. America Magazine always has supported it, but there may be better public policy alternatives.”

“That got a lot of attention because it’s unusual,” to give equal weight to politicians of different parties, he said. “Well, it shouldn’t be, and even less in Catholic news organizations.”

NEXT: Catholics debate how hard to hit ISIS in Middle East