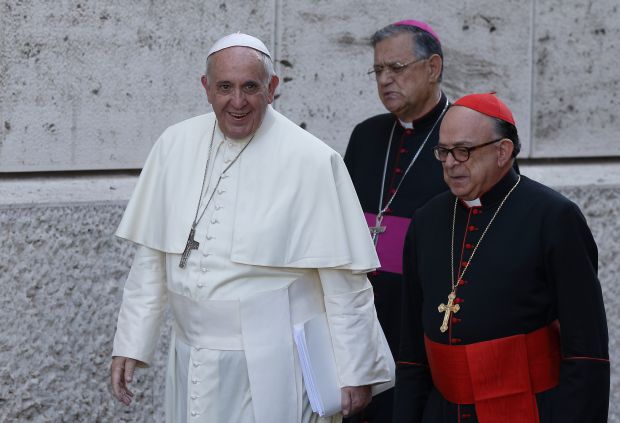 Pope Francis carries papers as he arrives for the concluding session of the extraordinary Synod of Bishops on the family at the Vatican Oct. 18. Walking near the pope are Latin Patriarch Fouad Twal of Jerusalem and Cardinal Raymundo Damasceno Assis of Aparecida, Brazil. (CNS photo/Paul Haring)

VATICAN CITY (CNS) — After several days of animated debate over its official midterm report, the Synod of Bishops on the family agreed on a final document more clearly grounded in traditional Catholic teaching. Yet the assembly failed to reach consensus on especially controversial questions of Communion for the divorced and civilly remarried and the pastoral care of homosexuals.

The synod’s last working session, Oct. 18, also featured a speech by Pope Francis, in which he celebrated the members’ frank exchanges while warning against extremism in the defense of tradition or the pursuit of progress.

Discussions in the synod hall had grown heated after the Oct. 13 delivery of a midterm report that used strikingly conciliatory language toward people with ways of life contrary to church teaching, including divorced and civilly remarried Catholics, cohabitating couples and those in same-sex unions.

The summaries of working-group discussions, published Oct. 16, showed a majority of synod fathers wanted the final document to be clearer about relevant church doctrine and give more attention to families whose lives exemplify that teaching.

The final report, which the pope ordered published almost at once after the synod’s conclusion, featured many more citations of Scripture, as well as new references to the Catechism of the Catholic Church and the teachings of Pope Paul VI, St. John Paul II and Pope Benedict XVI.

Synod fathers voted on each of the document’s 62 paragraphs. All received a simple majority, but three failed to gain the two-thirds supermajority ordinarily required for approval of synodal documents.

Two of those paragraphs dealt with a controversial proposal by German Cardinal Walter Kasper that would make it easier for divorced and civilly remarried Catholics to receive Communion. The document noted disagreements on the subject and recommended further study.

The document’s section on homosexuality, which also fell short of supermajority approval, was significantly changed from its counterpart in the midterm report.

The original section heading –“welcoming homosexuals” — was changed to “pastoral attention to persons with homosexual orientation.”

A statement that same-sex unions can be a “precious support in the life of the partners” was removed.

The final report quoted a 2003 document from the Congregation for the Doctrine of the Faith: “There are absolutely no grounds for considering homosexual unions to be in any way similar or even remotely analogous to God’s plan for marriage and family.”

Jesuit Father Federico Lombardi, the Vatican spokesman, told reporters that the absence of a supermajority indicated a lack of consensus and a need for more discussion, but stressed that none of the document carried doctrinal weight. The synod’s final report will serve as an agenda for the October 2015 world synod on the family, which will make recommendations to the pope.

Pope Francis said he welcomed the assembly’s expressions of disagreement.

“Personally, I would have been very worried and saddened if there hadn’t been these temptations and these animated discussions,” the pope said, “if everybody had agreed or remained silent in a false and quietistic peace.”

“So many commentators, or people who talk, imagined they saw the church quarreling, one part against the other, even doubting the Holy Spirit, the true promoter and guarantor of unity and harmony in the church,” he said.

While reassuring the assembly that the church’s unity was not in danger, Pope Francis warned against several temptations that he said had been present during the two-week synod.

One of the temptations he cited was that of “hostile rigidity” that seeks refuge in the letter of the law, “in the certainty of what we know and not of what we must still learn and achieve.” This temptation, he said, is characteristic of the “zealous, the scrupulous, the attentive and — today — of the so-called traditionalists and also of intellectuals.”

Another temptation for the synod fathers, the pope said, was that of “destructive do-goodism, which in the name of a misguided mercy binds up wounds without first treating and medicating them; that treats symptoms and not causes and roots. It is the temptation of do-gooders, of the timorous and also of the so-called progressives and liberals.”

Archbishop Joseph E. Kurtz of Louisville, Kentucky, president of the U.S. Conference of Catholic Bishops, said in a statement that he was “grateful that the clarifications and deepening of scriptural and theological reflection shine consistently” through the final report. “Now the real work begins!”