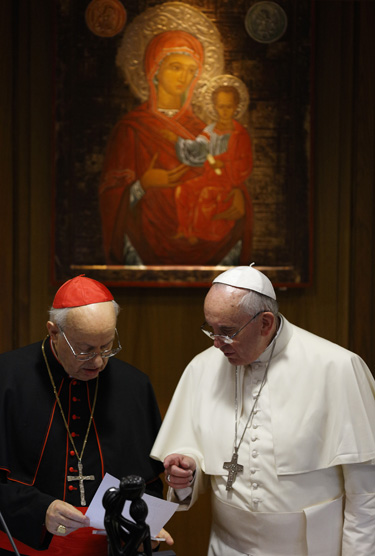 Pope Francis talks with Italian Cardinal Lorenzo Baldisseri, general secretary of the Synod of Bishops, during the morning session on the final day of the extraordinary Synod of Bishops on the family at the Vatican Oct. 18. (CNS photo/Paul Haring)

VATICAN CITY (CNS) — Even before the start of the Oct. 5-19 Synod of Bishops on the family, observers were likening it to the Second Vatican Council of 1962-65.

In both cases, an innovative and charismatic pope called an assembly in the first months of his pontificate, seeking to preach the Gospel in terms of contemporary culture and apply Catholic teaching with what St. John XXIII called the “medicine of mercy.”

As it turned out, history also repeated itself in the institutional dynamics of this year’s event, as bishops from around the world asserted their collective authority, leading the assembly’s organizers in Rome to revise some of their best-laid plans.

A classic history, “The Rhine Flows into the Tiber,” recounts the first tumultuous week of Vatican II, when bishops rejected the Vatican’s handpicked candidates for the commissions that would write the council documents.

“It was not a revolutionary act, but an act of conscience, an act of responsibility on the part of the council fathers,” recalled Pope Benedict XVI in 2013. Then-Father Joseph Ratzinger attended Vatican II as a theological adviser to Cardinal Josef Frings of Cologne, Germany, one of the leaders of the bishops’ resistance.

More than 50 years later, bishops at the synod on the family reacted strongly after the Oct. 13 presentation of an official midterm report by Hungarian Cardinal Peter Erdo of Esztergom-Budapest.

Cardinal Erdo’s report, which was supposed to summarize the assembly’s first week of discussions, made headlines with its strikingly conciliatory language toward people with ways of life contrary to Catholic teaching, including divorced and remarried Catholics, cohabitating couples and people in same-sex unions.

Immediately after the cardinal spoke, 41 of the 184 synod fathers present took the floor to comment. A number objected that the text lacked certain necessary references to Catholic moral teaching, particularly regarding homosexuality and cohabitation. Bishops also remarked on the midterm report’s scarce references to the concept of sin.

“Three-quarters of those who spoke had some problems with the document,” Cardinal George Pell, prefect of the Secretariat for the Economy, told Catholic News Service. He called the report tendentious, skewed and without sufficient grounding in Scripture and traditional doctrine.

At a news conference Oct. 13, Cardinal Erdo distanced himself from the midterm report, identifying Italian Archbishop Bruno Forte of Chieti-Vasto, the synod’s special secretary, as responsible for a particularly controversial passage on same-sex unions.

Later that afternoon, the synod fathers divided into 10 working groups to discuss the midterm report and suggest amendments for the synod’s final document. 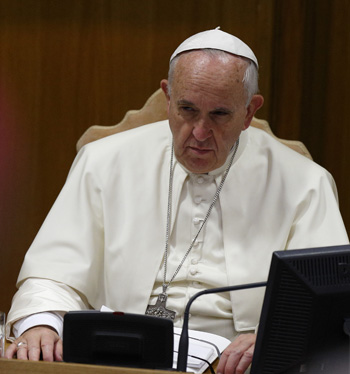 Pope Francis listens during the morning session on the final day of the extraordinary Synod of Bishops on the family at the Vatican Oct. 18. (CNS photo/Paul Haring)

The midterm report was “seen by many as not being as balanced as it should have been,” Cardinal Donald W. Wuerl of Washington told CNS.

Cardinal Wuerl, one of 11 members of a team that drafted the synod’s final report, said one common objection was to the theological concept of “graduality,” which the midterm report used, among other ways, to suggest the positive value of “irregular” relationships such as cohabitation.

“You don’t see that in the final document because the small language groups said, ‘Yes, it was said, but it didn’t garner support,” the cardinal said.

The synod’s leadership, under Cardinal Lorenzo Baldisseri, who served as general secretary, planned not to publish the working groups’ individual reports but provide them only to the drafters of the final report, along with their approximately 450 suggested amendments.

But on Oct. 16, the bishops insisted that the working-groups’ reports be made public.

“We wanted the Catholic people around the world to know actually what was going on in talking about marriage and the family,” Cardinal Pell said.

On the same day, the drafting committee was expanded to increase its geographic diversity, with the addition of Cardinal Wilfrid F. Napier of Durban, South Africa, and Archbishop Denis Hart of Melbourne, Australia. Just as bishops from a cluster of northern European countries had been leaders of change at Vatican II, some of the more outspoken synod fathers this year were from the English-speaking countries and Africa.

The synod’s final report, which the pope ordered published almost immediately after the assembly finished its work Oct. 18, featured many more citations of Scripture, as well as new references to the Catechism of the Catholic Church and the teachings of Blessed Paul VI, St. John Paul II and Pope Benedict XVI.

Synod fathers voted on each of the document’s 62 paragraphs. All received a simple majority, but three — on especially controversial questions of homosexuality and Communion for the divorced and civilly remarried — failed to gain the two-thirds supermajority ordinarily required for approval of synodal documents.